Concealed carry for fat guys is a little more difficult than it is for people of other body types. For us bigger than average dudes, we have a different set of problems when it comes to concealing our firearms on our body.

The main reason why is because we’ve got that little extra something special around our waistline, which also just happens to be the spot where the gun rests for most of us.

Before we get to a few pointers, I want to point out something that I hope to be obvious, and that is what works for me, a dude in the 300-pound range, may not work for you.

That’s just the way it is.

We are all different.

The most important step in this whole process is figuring out where on your body you want to carry your gun. We always advise people to carry on their person (as in physically on their own body) as opposed to in a bag or elsewhere off your body. It’s just safer that way.

But, the point is that you’ve got options.

IWB or OWB For Fat Guys:

First up, OWB carry is usually the much more comfortable method to carrying a firearm for self-defense. The reason why is because there is an extra barrier between your gun and your body in the form of your pants and belt.

This will also usually allow you to move more freely than you would with the gun right up against your body because it sits that much further away from you.

It’s also more comfortable because, depending upon the holster you’re using, the belt isn’t as important for the retention of the gun and can feel more loose around your waist. Don’t get me wrong, the gun’s belt is important, regardless, but it’s not required to be as tight, or at least it seems that way.

This is hard to explain, and not always true, but the pants feel tighter when there is a gun inside the waistband.

However, one of the cons to this is that because the gun sits further off of your body, it’s actually harder to conceal. This means that others will have an easier time seeing it if you move in such a way that shows part of it, or allows your shirt to show the outline of the grip and slide (called printing).

And because it is sitting further from your body, doing certain tasks, like buckling your seat belt or walking through tighter spaces, can be a little more difficult.

Inside the waistband, however, is almost nearly the exact opposite in that it’s easier for you to conceal the gun in more instances, but much more uncomfortable.

Because the gun sits closer to your body with less of a barrier, for most just being your under garment, or similar, you’ve got a hard piece of plastic and steel pressed up against your body.

And, because the belt is there doing its job, it’s pressed up against your body with extra force. It’s not just laying there, because your belt has to do its job and keep your pants up around your waist with the added weight.

The best part about carrying inside the waistband is that it’s much harder for someone to see that you’ve got a gun on your body. Because your gun is so much closer to your body, your over garments (shirt, jacket, etc.) have a much easier time helping you keep your little secret helping you retain a tactical advantage.

All of the below positions can be carried inside the waist, and a few outside.

Some guys like to carry in the front of their body, right in between their zipper and pocket. This is called appendix inside the waistband (AIWB). While totally possible for some guys to carry in this position, it can be a bit more difficult for a dude with a stomach.

For this, specifically, I recommend a company like Phlster or Keeper’s Concealment. These are appendix carry holsters before they’re anything else.

In fact, the owner of Keeper’s Concealment is a little on the plump side and knows a thing or two about carrying appendix. You can buy from his website, but I’d prefer if you bought from ConcealedCarry.com so I can get a commission, as I’m an affiliate of theirs.

The main benefit to carrying appendix is speed of draw. Because the gun is right there, you can get it out that much faster.

Another huge benefit is that it’s nearly impossible for someone else to take it from you because they can’t sneak up on you.

If you were to pretend you were a clock and your nose (so, front of your body) was 12 o’clock, your strong side hip would either be 3 or 9 o’clock depending on if you were right or left-handed. This is where a lot of guys carry, and it’s the best place to carry if you’re going to be holstered outside of the waistband (OWB).

OWB is great if you’re really fat or are just out for comfort and your gun staying concealed is second in importance.

Don’t get me wrong, you can carry inside the waistband (IWB) here as well and I’ve done this on numerous times. It is less comfortable, however, because you also have to contend with your hip bone, as well as sitting in spots where you may have already had a hard time fitting before you put a gun there.

Seatbelt? Forget about it. 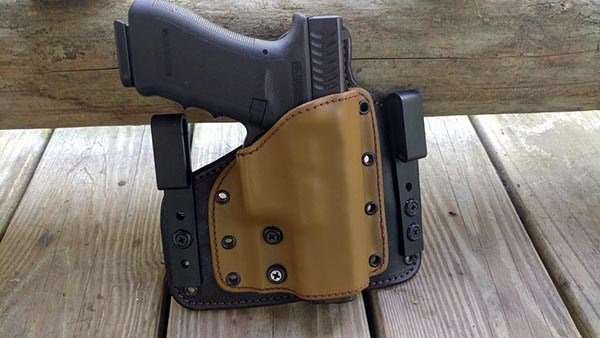 I’m lumping these two together because they’re close enough that it works. This can also be seven or eight o’clock if you’re a lefty.

This is my personal choice for concealed carry as a fat guy. Again, what works well for me might not work well for you. But for me, the gun inside the waistband sits on that soft spot right behind my hip. You know, called my butt cheek.

This offers the best balance of comfort to concealment and speed with practice that works best for me. Your mileage may vary.

This isn’t all peaches and cream, however, because the gun is in an odd spot and others may see it on you if your shirt rides up, or if you bend over awkwardly, etc. And, if the wrong person sees it on you they may attempt to take it from you, which has happened in the past to people.

The way around this is to use some sort of retention system beyond what the average holster has. This can be a strap and snap, or similar. The thought here is that the bad guy won’t know how to get the gun out and fail if he tries allowing you enough time to react appropriately.

The problem with most retention holsters is that they’re designed for outside the waistband use and are usually bulky for concealment purposes. Safariland Holsters are highly recommended and I know a lot of cops who use them.

As a matter of preference and safety concerns I’d stay away from the Blackhawk retention holsters because they can be dangerous.

Finally, here is an option found on ConcealedCarry.com that has a retention device that is meant to be carried anywhere IWB.

Small of Back Carry For Fat Guys:

I always urge extreme caution for people who wish to carry in the small of back, or six o’clock. This is the least safe method of carry no matter your shape. For one, the gun is usually resting up on your spine or close enough to it that you could damage your back if much more pressure is placed on it (like if you fell).

This is also the spot on your body that’s the hardest for you to reach and takes the longest from draw which are also reasons why this mode of carry is less than desirable.

If you wish to carry here, make sure you practice drawing. A lot.

Also, most people we see carrying in the SOB position tend to be doing it backwards. It doesn’t help when holster manufacturers also give out bad advice. If you’re going to retrieve your firearm and the palm of your hand is facing away from your body, you are backwards and likely flagging yourself (muzzling, pointing the gun, etc.) on the draw.

Everyone wants to do it like this because it is more comfortable and what they see in the movies. But it’s wrong and dangerous.

Other options for Fat Dudes: 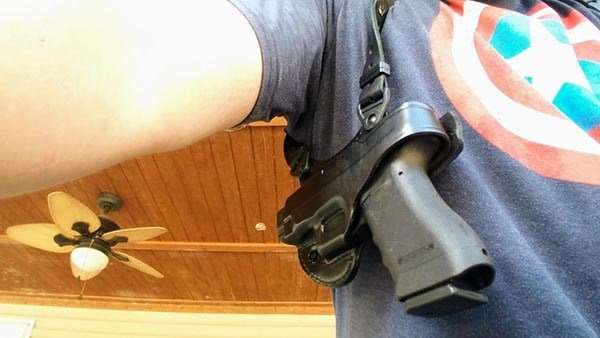 There are other options for you to carry, like with a shoulder holster. This is a viable option for those of you who carry over garments like a jacket. The problem here, is that you must wear the over garment in order to conceal the gun properly, and if you’re fat like me chances are good you also overheat easily.

If you’re like me, ankle carry isn’t going to work because, well, you’ve got to get to your ankle with speed and I know I struggle with that, personally.

Finally we have pocket carry, which is something I do from time to time. I like pocket carry because it’s easy to do and relatively comfortable. You won’t be winning any gun fights against a bunch of people with a pocket gun that holds 5 to 8 rounds of ammo, but is totally fine for most situations.

Practice Sitting with Your Holster:

Is sitting something you really have to practice? Well, yes if you’re trying out a new holster. There are a lot of other things that you’ve got to keep in mind too when you’re trying a holster out for the first time.

For example, something that is totally comfortable in the standing position will feel entirely different in the sitting position. When you buy a holster you have to understand that you’ll be trading some physical comfort for the ability to protect yourself should you ever need to.

The thing to keep in mind is that you’re not always going to be standing up, and sitting with your holstered gun may suck. This is one of the reasons why some concealed carriers remove their guns and holsters when they get in their car.

This bothers me for a few different reasons. First is that when your gun is off your body you lose control over your firearm. You must always retain control of your gun.

I won’t spend much more time on this in this article, but suffice to say that if you were to get in a car accident and you placed your gun somewhere in your car off body, it can go flying.

Concealed carry for fat guys is totally possible. The thing to keep in mind is that what works for me may not work for you. Also, try to remember that you may have to spend some money before you find a system that works for you.