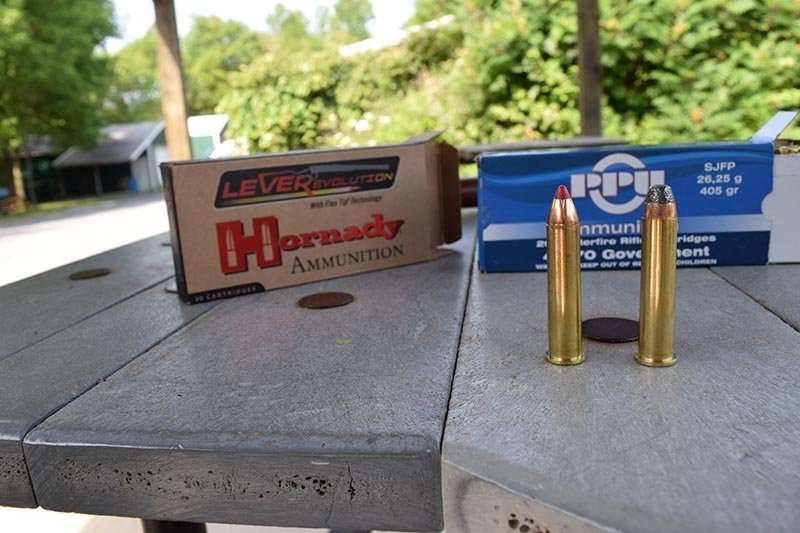 This is a two part article. The top is a history on the .45-70 and ballistics chart, the second deals with Black powder .45-70 Government Rifles.

The 45-70 dates back to as early as 1865 but it wasn’t standardized until 1873 when a U.S. Government contract was issued for several thousand Springfield rifles chambered for the 45-70. At that time it was called the 45-70 Government cartridge.

The .45-70 rifle cartridge, also known as .45-70 Government (and the only gov’t I trust), was developed at the U.S. Army’s Springfield Armory for use in the Springfield Model 1873 centerfire rifle. The cartridge is completely identified as the .45-70-405, but was also commonly called the “.45 Government” cartridge in commercial catalogs.

The nomenclature of the time was based on several properties of the cartridge: .45″ caliber bullet diameter, 70 grains of black powder and 405 grain bullet weight.

The 45-70 Government cartridge is beyond 130 years since its introduction and sales for this cartridge are ever growing. Simply put, the 45-70 Government is a wonderful big bore cartridge, chambered in a newer lever action or single shot rifle like the Sharps Model 1874, where loads can be worked up to higher pressure levels it is powerful enough for all of north America’s big game animals.

Here is a Henry Lever Action in .45-70 on Sportsman’s Guide: 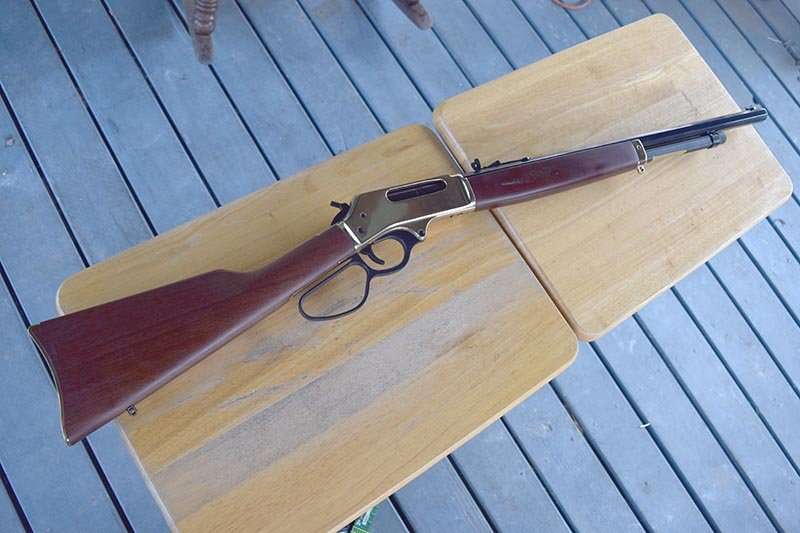 The 45-70 Government is a heavy hitter able to handle bullet weights up to 500 grains. The recoil is quite substantial from rifles chambered in the 45-70 cartridge, which should be kept in mind when introduced to newer shooters so they’re not discouraged.

Hornady has been making ammunition that boosts the performance level of many older cartridges such as the .45-70 Government. Hornady’s .45-70 Government 325 grain flex-tip bullet in their LeverEvolution ammunition (shown in the above photo) line sports a ballistic coefficient of .230 and is loaded to a velocity of 2,050 feet per second with 3,032 foot pounds of energy at the muzzle of a 24″ rifle barrel.

This gives excellent ballistics for the .45-70 Government out to 250 yards for hunting in north America with a remaining bullet energy of 1,277 foot pounds. Note: Hornady’s patented Flex Tip (Lucky Gunner Link) (FTX) bullets are safe to shoot in tubular magazines rifles. It’s also a good idea to pick up some snap caps so you can effectively dry fire your rifle, practice loading, etc. We recommend this ones from Amazon.

You can use the following ballistics charts as a .45-70 ammo comparison, that shows the velocity, energy, and drop for different weight bullets ranging from 250, 325, and 405 grains.

You can buy Hornady’s patented Flex Tip 325 grain 45-70 rifle cartridges at a good price by pushing that link. To read a comparison of the 45-70 Government to the 444 Marlin, check our this page of ours.

Our top recommendations for the best .45-70 rifles are as follows:

I personally owned one of these for a while. In fact, the one pictured above was my rifle that I sadly needed to sell when money got super tight. While the brass edition (pictured above and linked here on Brownells) is a gorgeous rifle, the steel lever action is more field expedient for hunting purposes.

Either one will work, however.

The Henry .45-70 rifles are currently loaded with a tubular magazine that holds 4 rounds. The rounds eject out the side and Henry recently seems to have made this caliber into the side-gate loading receiver.

I actually don’t own one of these, but our Editorial Director does, and he swears by it. The plus side about the 1895 is that it’s a tubular magazine that is loaded from a side-gate on the receiver. People who don’t buy a Henry because of this, but still want a side-ejection .45-70 rifle, usually go with a Marlin 1895.

*Update, Henry does offer a side loading 45-70 as a recent addition*

Even better, depending on the model you choose, you can find a full-length magazine that holds 6 rounds of .45-70, or a partial length tube that’ll hold 4 rounds. It’s all about personal preference, but you can find these rifles on Brownells.

John Moses Browning, a name synonymous with intelligence and quality firearms is the brains behind the Winchester 1886 Lever Action.

He was 21 when he developed it, and it revolutionized the way lever action rifles were built. No gun had been as strong until this point, and the actions till now had broken very easily. These rifles are loaded from the side of the receiver like the Marlin is, but the empty cases actually eject from the top of the receiver.

The interesting thing about today’s Winchester 1886 rifles is that the lineup changes from one year to the next. Cabela’s currently has a model in stock.

No matter which rifle you choose, it’s always a good idea to have some extra ammo just in case. An attractive addition to any 45-70 rifle is a butt cuff like this one.

Armory at Springfield, Massachusetts, May 9, 1879. It records the results of long range tests of U.S. Army Model 1873 .45-70 Government Springfield rifles using 405 and 500 grain lead bullets, including variations in muzzle velocity and penetration of lead bullets through one-inch target boards and into sand. These tests were made at the request of the Chief of Ordnance.

Old Ordnance records show that when fired from a machine rest the .45-70 Springfield was expected to group all of its bullets inside a 4 inch circle at 100 yards, in a 11 inch circle at 300 yards, and inside a 27 inch circle at 500 yards. Though there is no direct relationship between mean radius and group size figures, the .45-70 delivered a mean radius of 18 to 19 inches which, would probably translate into a group size of between 55 and 70 inches at 1,000 yards.

The report of October 15, 1879, covers long range firing at Sandy Hook, New Jersey. This was done along the beach to make the location of the bullet strike easier to find. Also, the long beaches allowed shooting back to 2,500 yards.

Since one of the test’s objectives was to gauge bullet penetration, the huge target used consisted of three 1 inch thick boards, separated by 1 inch cleats. The target was supported on 6 inch spruce posts and was constructed partly of spruce and partly pine.

When the Springfield long range cartridge was fired, the 500-grain blunt nosed lead bullets propelled by 80 grains of black powder in the 2.4 inch cases at about 1,375 fps penetrated right through the three inches of wooden target and buried themselves in the sand. One 500 grain slug pierced three inches of target and buried itself in a supporting six inch post, giving a total penetration of a measured 5.25 inches. The Service 405-grain bullet gave a penetration of just 1.12 inches

The quicker-twist rifles required less elevation than the other slower-twist rifles at the same range. The greatest distance obtained with the .45-caliber long range, 1-in-18 twist Springfield rifle was 3,680 yards.

Since the tests showed that the 405 grain service bullet failed to perform as well as the 500 grain, and that the 500 grain bullet showed relatively little difference when propelled by either 70 or 80 grains of black powder, the .45-70-500 load in the service 2.1-inch case was adopted as standard for military rifles.

1. Enlarging powder capacity from 70 grains black powder to 80 grains black powder, little gain.
2. Enlarging bullet weight from 405 grains to 500 grains, large gain in distance.
3. Faster twist rifling from 1 in 20 inch twist to 1 in 18 inch was also a long range advantage for shooting the heavier bullet of 500 grains.
The .45-70-500 load in the service 2.1 inch (.45-70) case was adopted as standard for military rifles after Sandy Hook, New Jersey tests of 1879.

When reloading the .45-70 black powder cartridge, it is a good idea to start with the lowest velocity powder you can find which is Fg black powder which also gives the lowest pressure loads as well. When going with a lesser charge of black powder make sure you use a filler in the cartridge on top of powder charge so there is no air gap between bullet and powder.