Sticky Holster Review: A Perspective From Pocket CarryA while back I was in the market for a new pocket carry holster for my Sig Sauer P938 and a small snubby .38 special revolver I have. To be honest, concealed carry in a pant pocket is something that I do a couple times per week and have grown more accustomed to with my training.

I do want to say right now that drawing your gun from the pocket is a different kind of animal altogether, and something you need practice on a regular basis before you make any transitions from your current method. Though, I do still carry with other holsters, as well, depending on what I’m wearing that day.

I reached out to the company representative I met at one of the bigger industry conferences (though I can’t remember which one, likely SHOT) from Sticky Holsters, and he agreed to send me a MD-1 Sticky Holster to try out. I’ve had it for over a year, and while I exclusively use it as a pocket carry holster, I can say that, after a year of holding up to my abuse, this is one of the best concealed carry holsters I own.

Before we get to the actual holster, though, I do want to do some housekeeping stuff, to get some things I consider to be all-important, out of the way. Namely, talking about holsters and their function, in general.

What is the purpose of a concealed carry holster?

This may be hard to believe, but your concealed carry holster does more than just hold your gun. It’s also supposed to protect your gun from you, and you from your gun, as much as possible. A great example of this, is that your chosen concealed carry holster needs to protect your trigger from any and all manipulation to prevent unintended discharge. 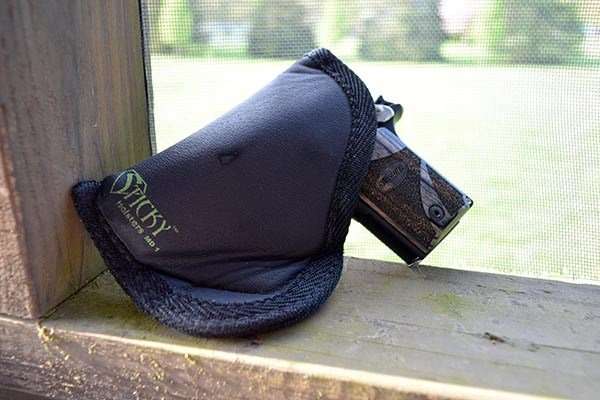 One of the ways many negligent discharges happen is from a damaged or otherwise inoperable holster that allowed the trigger to be pressed unintentionally. This is one of the reasons why I always tell people to inspect their gear at least on a periodic basis so you don’t end up with any boo-boos in the form of a bullet hole.

More than that, your holster should be made of a durable material in which the trigger cannot be pressed. If I haven’t been clear up until this point, you must have a strong, durable holster that doesn’t damage easily, deform, or allow the trigger to otherwise be pushed so that the gun fires when you don’t want it to.

Your gun holster also needs to offer up some sort of retention to keep your gun from falling out and onto the floor causing all the snowflakes in the room to have a panic attack, break down, and scream for their lives. Some Kydex or leather holsters use a tight-fitting, adjustable retention system that is passive. Others make use of a more active system like snap or strap that you have to undo before you can un-holster your gun.

How Sticky Stacks Up:

The Sticky Holster’s retention is based on compression. If in your waistband, your waistline and/or gun belt will compress the the material to get tighter around your gun. I didn’t really carry my gun with a Sticky IWB, I did put it in there a few times just to see how it retained the gun, and was pleased to say that it didn’t just slide out with no pull.

In other words, I had to yank it out of there.

In the pocket, the Sticky Holster offers up less retention, by design, because it isn’t as needed. After all, it was in my pocket. And unless I’m doing somersaults and flips, it’s not going to fall out.

How has it held up over the past year?

It has worn a bit as you can see from the photos. That one dark spot there on the side is from my Charter Arms snubby revolver. That spot is right where the sharp edge of the cylinder sits but there aren’t any holes in the material inside or outside. I am happy to say that the stitching has held up pretty well and it isn’t falling apart as some other holsters with stitching do.

In addition to the stitching, its construction is solid. Again, I’ve worn it a few days each week for about a year. I’m not entirely sure what the outside “sticky” part is made of, because I’ve never really felt anything like it before. It’s almost like a fake leather, that isn’t really anything like fake leather. Confused yet? Well, if you’re not confused, I’m next going to tell you that it’s rubbery, as well as leathery.

There. That should do it …

The inside of a Sticky Holster seems like a material I’m more knowledgeable on, which is, I believe, nylon. Then again, I’m not entirely sure what it’s made of, either. And I won’t know because I’m not pulling it apart–I like it too much. All I know for certain, is that there are only wear marks and rubs without any holes.

I do want to say, however, that the wear marks seem to be thinning out, so it’s likely just a matter of time before a hole does present itself in one of those thinner areas. For a holster with an MSRP under $30, I’ll take it.

There are no clips, loops, or anything for you to attach. Literally just slip it into place, and it’s good to go, ready for you, if you need your gun in self-defense. Drawing the gun is simple, just pull it out. I will likely show you how I draw from the pocket in a future article with a few more details. But for now, let’s talk about re-holstering your gun in your Sticky Holster.

It is recommended that you re-holster in such a way that you can actually remove the holster from wherever your holster is on your body, slide the gun inside, then finally put them back on your person as a unit. This way, you minimize any trigger manipulation.

Some folks hate this extra step, and if you are a speed-holsterer, then move on. This is not a method you should consider for concealed firearm carry.

I haven’t really carried it inside the waistband to date, but know plenty of other folks who use it as an appendix carry holster and swear by it. I know my good pal Eve from guns dot com jogs with hers using some crazy drawstring method and it stays in place.

I don’t jog which is good because there’d be earth-shattering consequences nationwide if I did.

Overall, the Sticky Holster performed great for pocket carry. It is one of the best concealed carry holsters I own, because it’s one of the few that actually serves a purpose in my self-defense lifestyle. Again, I can’t really speak about it inside the waistband, but if you can I want you to let us all know how your Sticky Holsters have done to replace your normal method of carrying a concealed gun. Let us know in the below comments.

I’m not the only one who’s digging Sticky Holsters. Check out a few reviews I pulled off of Amazon: