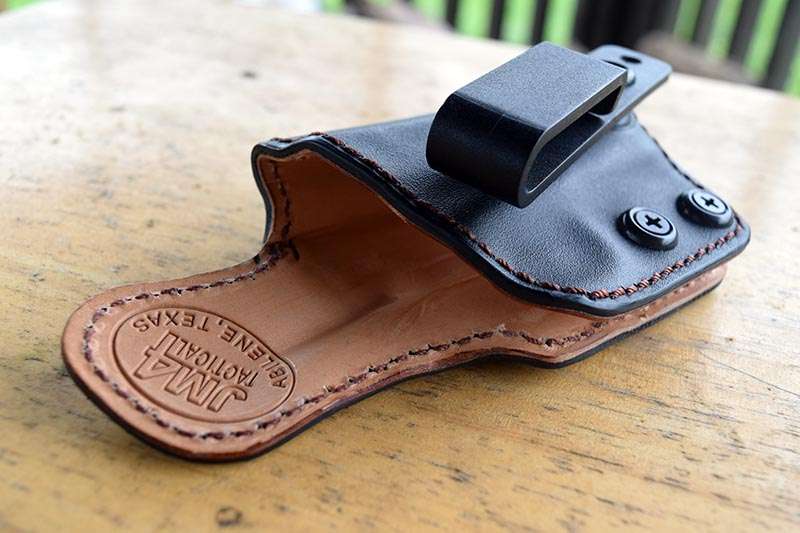 It’s not every day a company thinks so far outside the box so as to completely revolutionize an industry. JM4 Tactical has done it now, twice. First, with the release of their Hermann Oak Leather Magnetic Quick, Click, and Carry holster (our review).

And now, with their RELIC Polymer holster that sews said leather to the inside of Boltaron polymer, creating a near-silent draw that also protects your gun’s finish.

Before I move on, let me state right now that I’m friends with the owners of JM4 Tactical, and even wrote the press release they sent out for this announcement. I’m not an employee, but do help them out from time to time.

This in no way hinders my ability to write an honest review, because, even though this holster is of excellent quality, I’ve never seen holster that is perfect–as I’ll show you in a little bit.

But, in the name of transparency and wanting to to be as honest as possible, I needed to get that off my chest early on. My duty has always been, and will continue to be, to you the consumer. My goal as a product reviewer has always been to show product deficiencies, and nobody owns my opinion.

Each holster is molded to fit your specific gun, and I can say after having one for about two months for my Sig Sauer P938, that the fit is fantastic. The gun does not move around inside the holster, at all.

Which, after getting a holster in the mail from another relatively new holster manufacturer with a gun that swims around in the shell, that is a nice touch. 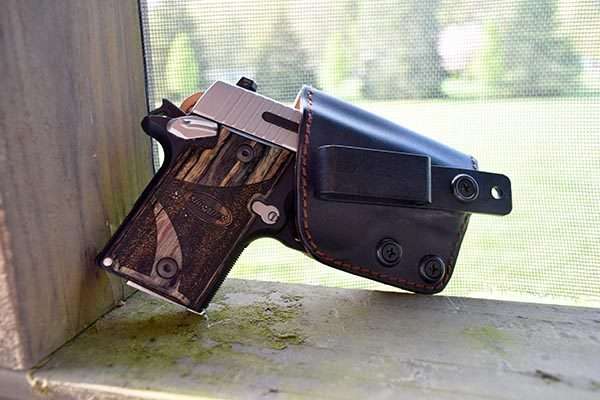 The RELIC, which stands for Reliable, Easy, Light, Individual, Carry, revolutionizes concealed carry in that it does something that has never before been successfully done, which is sew high-quality leather to the inside of the holster creating a near-quiet draw.

Now, I say that it’s never been “successfully” done before, even though there is a company who makes similar holsters … but they’re not sewn in place and the glue holding it together does eventually deteriorate. This, in turn, causes the leather to come off the Kydex. I know this because I’ve seen it first hand.

Speaking of Kydex, that’s not the polymer this is. While Kydex polymer sheeting has set the standard for holster manufacturers across the country, JM4 Tactical actually used a polymer known as Boltaron that seems to set a new standard.

While you may have never heard of it before, I can almost guarantee that if you’ve ever handled one of the shells from Alien Gear’s Cloak Tuck 3.0 and earlier, you’ve held Boltaron before, unknowingly.

Why Boltaron instead of Kydex? Well, Boltaron is stronger and resists extreme cold and heat much better than Kydex. And, it’s strong out of the box, whereas unless you know for certain that you’re getting brand new American-made Kydex, you may be getting recycled Chinese Kydex. When preparing for the press release I asked Chad about why he chose it:

We have determined 3 major issues with traditional plastic holsters: deformation and cracking due to extreme temperatures, damage to the firearm due to the hard plastic, and they are just rather loud when holstering and unholstering the firearm. The RELIC Holster solves all of these problems.

JM4 Tactical has 4 different styles of the RELIC Holster, and the one they sent me this time around is the Tuckable version that can be worn anywhere inside the waistband from appendix all the way to small of back. I’ve been wearing the one they sent me for about two months at about 4 o’clock, and am pleased with it, so far.

I have to admit that I was hopeful that I was finally going to be able to find an appendix holster I could use with my enormity. I was getting ready to start making my own appendix holster that works for dudes with bigger-than-average beer bellies. But, because this thing is fully adjustable, I put that project on hold.

And that, my friends, is sadly where the main problem is for this holster.

Even with it being fully adjustable for ride height and cant, I was still unable to find a spot on the front of my body where I could be both comfortable and draw the gun out of the holster. I’m not sure if it’s because I’m so oddly shaped at 6’4″ and 290 pounds, or what, but the search for a proper appendix holster that I can use continues.

Who knows, maybe I will make one that does the job one day.

There are currently four models available, the Tuckable I have, an appendix, a hybrid, and a paddle holster. Again, I only have the fully adjustable Tuckable (JM4’s Website) but have seen the others, too, at the NRAAM last month. They all look like sturdy holsters. 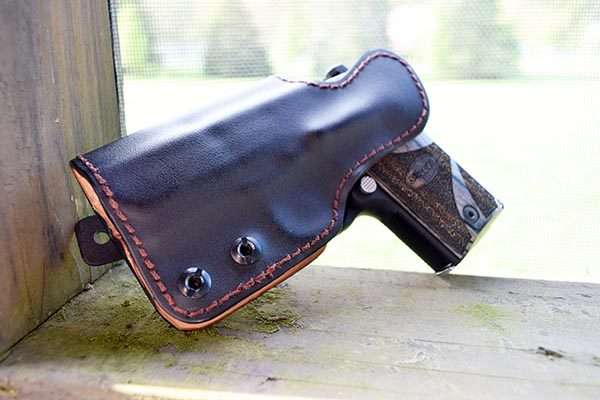 My P938 fits inside the holster like a hand in a glove (though, not one of OJ Simpson’s gloves), and I can attest that the draw is nearly as silent as it would be with any leather holster. You’ll be happy to find out that retention is adjustable and the gun has no movement once inside.

The leather on the inside feels soft, and is holding up nicely even though I’ve conducted hundreds of draws with the gun both strapped to my waist, and not. Re-holstering is also a breeze because the hard-molded polymer keeps its shape well, once the gun is removed–a feature missing on most leather holsters, to include JM4 Tactical’s Quick, Click, and Carry. (That link goes to their website)

While most Kydex holsters give a little when pressed on because they seem flexible due to thinner material, the RELIC doesn’t give and just feels strong all around. And, while certainly not the most uncomfortable holster I’ve ever tried out, it’s not the comfiest, either. I think the main reason why this is, is because the material is so thick.

Comfort is a personal issue though, and remember that my body isn’t shaped like most people. If I had to rate comfort on a scale of 1-10, I’d give the RELIC a 7 or 8 because I’ve been able to wear this holster without issue 16 hours per day for this test and I like it enough that the JM4 Tactical RELIC will stay as a regular in my concealed carry regimen, whenever my 938 is on the menu for the day.

Also, while I have not tried the JM4 Tactical Hybrid Holster (their product page) just yet, that padded suede looks cozy, even for the biggest of guns. 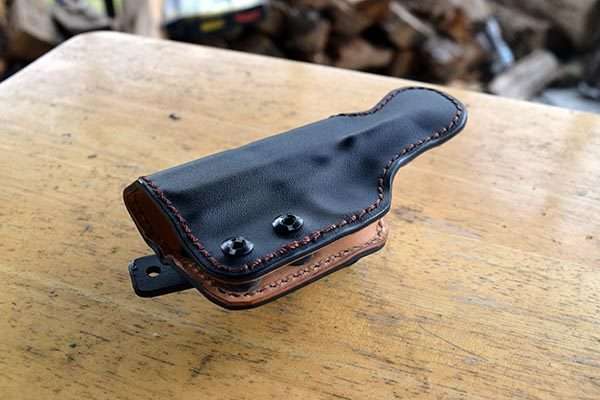 Each one of the four models being offered are made available with either black Boltaron Polymer or tan. Each holster comes with brown stitching, which really makes the holster pop, and you can only get the RELIC with the polymer and leather sewn together.

Another issue I’ve had, that isn’t the biggest deal and something I cannot explain, is that my gun left black serration marks on the leather and they won’t come off. It’s almost as if I holstered it one day with 3 dirty slide serrations, and the oil or dirt won’t come off.

I’m not sure how to clean it off, but so far my attempts have been unsuccessful. While this is certainly a negative if you care how your holster looks, it has no bearing on the function of the holster, itself.

Furthermore, there is no reason that this was some sort of operator error on my part. I don’t usually holster nasty firearms, but anything is possible.

The RELIC offers up total trigger protection, which is, to me, essential for safe gun carry. But, protection doesn’t just stop there … your gun’s finish is also protected because it only ever touches treated leather. And, I’ve conducted hundreds of draws and re-holsters and the firearm’s finish is no worse.

Polymer, by itself, and even some cloth, will eventually wear marks into your gun’s finish. That’s just the name of the game. I know many people don’t really care that their finish gets marred up (like this person), but there are plenty who do. I, personally, can get behind this benefit because I own guns that got some scratches on them from practicing the draw, and it pisses me off.

But, it’s like my dad always said … better to be pissed off than pissed on.

Perhaps one of the best things about this holster is the great support for strange guns that most people would never want to carry. Sure, they’ve got your Glock 19, S&W Shield, and XD, but they also have CZ75, Beretta 92, and Canik TP9 SFX. If you carry, or want to carry, an oddball gun, they may have a holster for you.

The JM4 Tactical RELIC (product page) is sturdy and hasn’t given me any real issues so far. It’s only been a couple months, so I’ll be sure to write a follow up to this review. As of right now, I’ll continue wearing this $95 holster a few times each week, and do so with the assurance that the tool I protect my family with rests in something worthy.

Now on to answer the big question: Do I recommend this concealed carry IWB Holster for YOU to wear? Yes, I do. It’s a solid option for concealed carry and they only use the highest quality products they can find, hence the price tag. If you can afford it, you can’t go wrong with this holster.