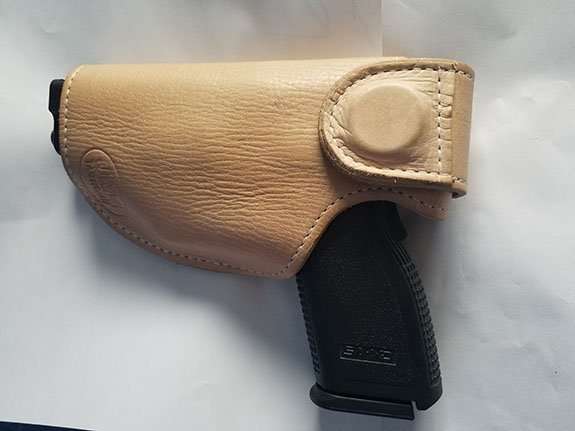 This is an update to a holster review that was published in August of 2018. I still own this holster and liked them so much I ended up getting several more for different guns.

What is the JM4 Tactical Quick Click and Carry?

It is essentially a leather concealed carry holster that utilizes magnets for the retention of the firearm and to attach to the clothing you’re wearing.

What’s great about it is that you can use any type of pants to include those that utilize a belt, sweatpants, yoga pants, etc.

The magnets are so strong that you can actually walk in your house, turn around, and stick it on your steel door, like I did below:

Yes, that’s a full size Springfield Armory XD9 with a full magazine hanging upside down on my door.

I first got my hands on the JM4 Tactical leather holster a few years ago because I saw the design and liked what I saw.

I like to put holsters through a rugged test to make sure they hold up, so I used and abused it, and can say that I’m happy with what I’ve found.

The main thing that makes this holster different, is that it utilizes a couple of dual-purpose magnets in its design.

When I say dual-purpose, I mean that they are meant to do a couple of things.

First, the magnets are placed in a manner so that they’re attracted to each other, and that’s what keeps your holster from moving out of place.

One magnet on each side of your clothing keeps the gun in place so it doesn’t move.

Second, the magnets are used in the retention of the gun, making sure it doesn’t fall out.

The way they do that, as seen in the above picture, is by being placed on either side of your waistline. The magnets are attracted to each other which creates a strong magnetic force keeping things in place.

It really works quite well, and I know someone will ask so I’ll just dispel this rumor right now: No, there is no magnetization of the gun. At least, not that I’ve noticed.

First, let’s discuss how the magnets work to keep the gun in your pants.

You stick the holster down your trousers, and then flip the flappy magnet part over your belt or the top of whatever pants you’re wearing.

There isn’t a ton of adjustability with it and this particular holster is meant to sit down low.

They do have a high ride version which sits up higher and allows you to get a full combat grip on the gun before draw, but it’s hard to get that with this particular model.

There are a few things that a holster needs to be able to do, in order for it to be considered “good” in the eyes of most concealed gun carriers.

And of course, it needs to be safe.

I wanted to see how strong the magnets were and to see how well it could hold not only the gun, but also the simulated clothing.

The following picture shows the full-size Springfield Armory XD9 pulled halfway out, on purpose by me. It stayed put and did not move. Again, the magnets are strong.

This time, I figured I’d stick it on a piece of paper. Same result until the paper ripped:

Some folks like to keep a gun by the door for easy access. We won’t discuss if that’s a good tactic or not right now, but you can’t get any closer to your front door than on it, like in the below picture.

Now that we’ve gotten the basics out of the way, how does this holster hold up under pressure?

The leather is Herman Oak Grade A, and there are two layers of it that are stitched together. It seems as though a lot of use would be required to wear a hole in it, which is great.

**To update that I’ve had this holster for several years and it’s still going strong.**

The stitching seems to be high quality and has also held up nice over the years.

Here is another shot, up close. A portion of it is double stitched, which gives extra peace of mind that it won’t fall apart.

The next few pictures are of the magnet’s leather. I had originally had concerns about the leather being too thin here, but there have been zero issues for it.

I suspect that these have to be thin in order to work right with the right amount of magnetized force.

Here is the other magnet, up close:

A few paragraphs ago I mentioned that I have a hard time getting a full-combat grip on the draw. This is huge for effective self-defense with a handgun.

Without a solid grip, the shooter could end up inadvertently causing an operator-induced malfunction with a limp-wrist or loose grip. Just so we’re clear, a full combat grip is one that has the web of your hand as high up on the grip as possible.

They have since introduced the high ride Quick Click and Carry holster that solved this problem for me and is my go-to. In fact, here is a video review for it:

I can say that, as far as a holster meant to be worn in the appendix position, which is usually uncomfortable for me, it is fairly comfortable. And to be honest, it is comfy in most positions you’d carry on your waist.

There is a downside to using this type of holster for concealed carry, and that is the re-holstering.

In order to re-holster your gun you have to remove the holster from your body. Reason being, the holster collapses under the weight of your pants.

This makes training more difficult because an extra couple of steps are required to reset.

Overall, this one has my stamp of approval. Prices range depending on several factors, so it’s recommended that you go straight to the horse’s mouth to get the current prices.

I also want to give a word of caution to any of you who may wear pacemakers or other devices keeping you alive that could be hurt by a strong magnet. These magnets are very strong, so keep that in mind.

Have you tried one of these before? If you have, please let me know what you thought about it in the comments below. If not, check this concealed carry holster out, here.