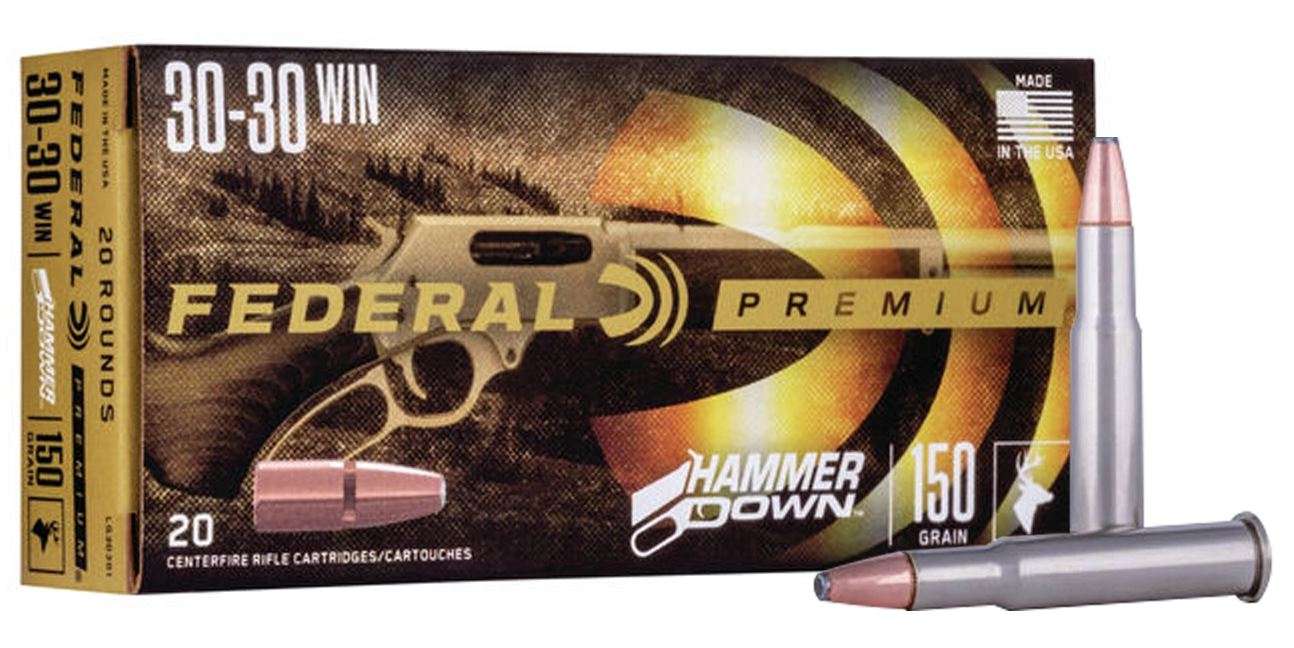 The 30-30 Winchester centerfire rifle cartridge is a .30″ caliber, rimmed, bottleneck cartridge case design that is reloadable. This 30 caliber cartridge was introduced all the way back in 1895 and has remained popular throughout the years.

Rifles chambered in this round have a barrel bore land to land diameter of .300″ and a bore groove to groove diameter of .308″ and are usually lever action guns.

The 30-30 Winchester was introduced to the public as the first smokeless powder sporting cartridge by Winchester in 1895 as the .30 WCF, chambered in their, then-new, model 1894 lever action rifle.

It has been chambered in several different action types but the lever action is by far the most popular with Winchester’s own Model 94 rifles running into the millions of firearms produced.

The 30-30 Winchester is well beyond 100 years since its introduction and sales are still high for this cartridge as it remains one of the top selling hunting calibers.

The obvious use for the 30-30 is hunting. And it really stands out as a brush gun with a shorter 20 or 18 inch barrel.

The shorter barrels usually found on the lever action 30-30s lend themselves well to stalking prey and actually hunting. They allow the hunter to maneuver around much better, while still offering the terminal ballistics to kill medium sized game.

Many deem 30-30 Win underpowered, and it is lackluster in terms of performance when compared to many other modern centerfire rifle cartridges. But it still has a use in terms of medium and sometimes large size game hunting.

Most deer are shot within a 100 yard range limit in the woods. When there are big, bullet stopping trees present the range can decrease significantly.

The 30-30 Winchester cartridge in a short lever action rifle is more than adequate to get the job done and is also excellent for hog, and even bigger game like elk.

Some hunters have even used it to hunt black bear with success.

Modern technology has really helped the 30-30 Winchester in terms of performance, breathing new life into the antiquated rifle cartridge by adding a little more effective range to it. Hornady, Buffalo Bore, and others have really helped to stretch this cartridge out past its previous limits.

These newer loads also help the projectile deliver more energy to target, increasing the chance of a clean kill.

The 30-30 Winchester’s recoil is less than the 308 Winchester cartridge and is light enough for most individuals to enjoy shooting all day long with no ill effects felt from recoil.

In fact, the 30-30 is a great cartridge for a newer hunter or child because of how forgiving it is on the shoulder.

The following 30-30 Ballistics chart assumes a 160 Grain FTX bullet fired from a 24″ barrel, with a ballistic coefficient of .330. Please keep in mind that most rifles chambered in 30-30 have a shorter barrel length which will effectively lower ballistics.

The following ballistics table features a 170 Grain 30-30 Winchester with a ballistic coefficient of .254. This is the Federal Non-Typical Soft Point bullet.

The 30-30 is an old cartridge. And when many would claim that it has suffered a long, slow death, I’d say that the opposite has happened. With modern technology the effective range has been stretched out, and in some cases it can even take black bear and elk.

In other words, the 30-30 Winchester is 126 years young, and still going strong.