Designed in 1945 by Sergei Gavrilovic Simonov, the SKS is a semi-auto carbine. It is a self-loading carbine Simonov system 1945, or SKS 45.

Originally, it was meant to serve alongside Mikhail Kalashnikov’s new AK-47 design, to replace the Mosin Nagant bolt action rifle that had been in service since 1891.

However, as the mass production of AK patterned rifles increased, the SKS rifle would soon phase out of service. While the carbine was replaced entirely by the AK-47, it remained as a standby in second-line service for decades and still remains as a ceremonial firearm today.

It was exported and produced by the former Eastern Bloc Nations, as well as China, where it would be known as the Type 56, and in modified form, the Type 68. In East Germany as the Karabiner S, and in North Korea it was known as the Type 63.

Today, it is very popular in the civilian surplus market.

The SKS is chambered in the still wildly popular 7.62X39 round, which is an intermediate cartridge that was also used in the AK-47.

The SKS carbine is conventional in layout with a wood stock and no pistol grip. Many versions have the integral folding bayonet, which hinges down from the barrel. Some versions, like the Yugoslavian M59/66 variants are equipped with a grenade launcher.

Just like the American M1 Carbine, the SKS is a less powerful and shorter gun than the semi-auto rifles leading up to it.

Similar to the AR-15, the SKS rifle is not a modern assault rifle because it does not possess the capability for select fire. There were some select fire variants produced in the PRC, however the basic design of the SKS is semi-automatic.

The sks carbine’s ten-round box magazine is fed from a stripper clip, and rounds stored in the magazine can be removed by depressing a magazine catch (thus opening the “floor” of the magazine and allowing the rounds to fall out) located forward of the trigger guard.

The Chinese standard SKS is semi-automatic that has a fixed/hinged 10 round magazine which is loaded from the top of the rifle manually either by inserting the ammunition one round at a time or with a disposable 10-round stripper clip.

It is a gas-operated weapon with a spring-loaded operating rod and a gas rod that works the action via gas pressure pushing against them. It also has a “tilting bolt” action locking system.

Norinco had at one point manufactured the SKS-M, SKS-D, and MC-5D models which were engineered from the factory to accept AKM magazines without problems (though the wood stock must be relieved to accept drum magazines). The SKS also has a slightly longer barrel than AK-series rifles, with a fractionally higher muzzle velocity.

While early Russian SKS rifle models had spring-loaded firing pins, most variants of the SKS have a free floated firing pin within the bolt. Because of this design, care must be taken during cleaning (especially after long storage) to ensure that the firing pin does not stick in the forward position within the bolt.

SKS firing pins that are stuck in the forward position have been known to cause accidental “slamfires” (uncontrolled automatic fire that empties the magazine, starting when the bolt is released). This behavior is less likely with the hard primer military-spec ammo for which the SKS was designed.

As with any firearm the user should properly maintain their firearm.

Slamfires are more likely to occur for SKS collectors when the bolt still has remnants of cosmoline embedded in it.

The firing pin is triangular in cross section, and slamfires can also result if it’s inserted upside down. The firing pin should be dry, and rattle around loosely inside the bolt.

If desired, the firing pins on most SKSs can be modified with a spring to resemble the early Russian models.

In most SKS rifle variants the barrel is chrome lined to increase barrel life. Yugoslavian models are the most notable exception to this.

Military SKSs have a bayonet attached to the underside of the barrel, which is extended and retracted via a spring-loaded hinge (some are removable whereas some are permanent). 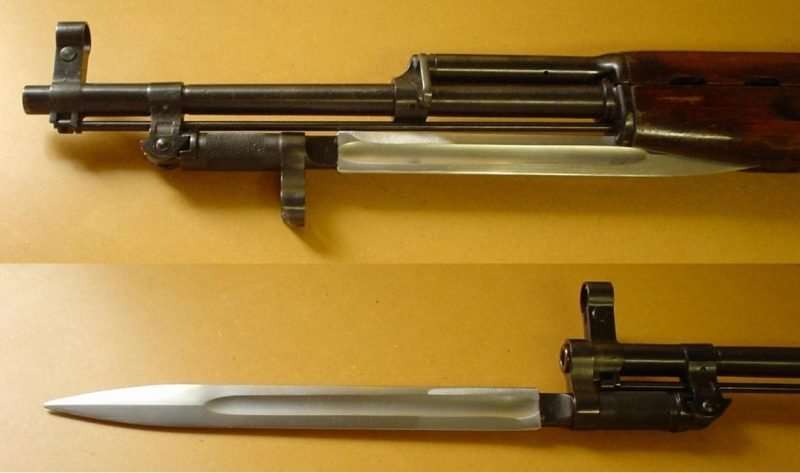 Besides needing a screwdriver to remove the stock, the SKS is easily field stripped and reassembled with no tools. It has a cleaning kit stored in a trapdoor in the buttstock, with a cleaning rod running under the barrel, in the same style as the AK-47.

The SKS trades accuracy for ruggedness, ease of maintenance, ease of use, and low manufacturing cost. It has a slightly longer barrel than AK-pattern rifles, with a minimal increase in muzzle velocity. In short, it is a simple design that is highly effective and rugged.

Although the quality of Russian SKSs manufactured at these legendary state-run arsenals was quite high, its design was already obsolete compared to the Kalashnikov which was selective-fire, lighter, had three times the magazine capacity, and had the potential to be less labor intensive to manufacture.

Gradually over the next few years, AK-47 production increased until the extant SKS carbines in service were relegated primarily to non-infantry and to second-line troops. They remained in service in this fashion even as late as the 1980s, and possibly the early 1990s.

The SKS rifle was to be a gap-filling firearm produced using the proven operating mechanism design of the PTRS and using proven milled forging manufacturing techniques.

This was to provide a fallback for the radically new and experimental design of the AK-47, in the event that the AK were to prove a failure. In fact, the original stamped receiver AK-47 had to be quickly redesigned to use a milled receiver which delayed production, and extended the SKS service life.

The SKS was taken out of service among its client nations during the 1960s and 1970s, although the Chinese police and military forces continued to use it during the 1980s.

Many surplus rifles were sadly disposed of in the 1990s.

Photographs and stories exist of SKS rifles used by guerrilla fighters in Bosnia, Somalia, and throughout Africa and South-East Asia during the 1990s and 2000s.

During the Cold War, Russia shared the design and manufacturing details of the SKS rifle with its allies. Therefore, many variants of the SKS exist. Some variants use a 30-round AK-47 style magazine (Chinese Type 68 and 68/72, also known as “D” & “M” models), gas port controls, flip-up night sights, and prominent, muzzle-mounted grenade launchers (Yugoslav M59/66, possibly North Korean Type 63).

Early versions of the Russian SKS rifle and later Chinese Type 56s (produced 1965-71) used a spike bayonet, whereas the majority use a vertically-aligned blade. Many smaller parts, most notably the sights and charging handles, were unique to different national production runs.

A small quantity of SKS carbines manufactured in 1955-56 were produced in China with Russian parts, presumably as part of a technology sharing arrangement.

Many Yugoslav M59/66 series rifles were exported to Uruguay and Mozambique; the Mozambique versions having teak wood stocks, the wood supplied by that nation.

The vast majority of Yugoslav M59 and M59/66s have elm, walnut, and beech stocks. SKS carbines have also made appearances in recent conflicts in Africa, Afghanistan, and Iraq.

The SKS rifle has also been featured prominently around the world during times of civil unrest. In the United States, the SKS was used successfully by Korean shopkeepers to fend off looters during the 1992 Los Angeles riots.

There is some debate as to the relative quality of each nation’s SKS production; Yugoslav types are generally considered to be better made than Chinese, yet the Chinese types typically have chrome lined barrels while the Yugoslavian versions do not.

If you’re interested in 7.62X39 ballistics, check out our rifle ballistics chart, next.

Never has there been a better time in … END_OF_DOCUMENT_TOKEN_TO_BE_REPLACED

CZ USA is the U.S. based subsidiary of CZUB, a … END_OF_DOCUMENT_TOKEN_TO_BE_REPLACED

Elmore County, Alabama -- A man is in … END_OF_DOCUMENT_TOKEN_TO_BE_REPLACED

Florida -- A 22 year old man was arrested on … END_OF_DOCUMENT_TOKEN_TO_BE_REPLACED