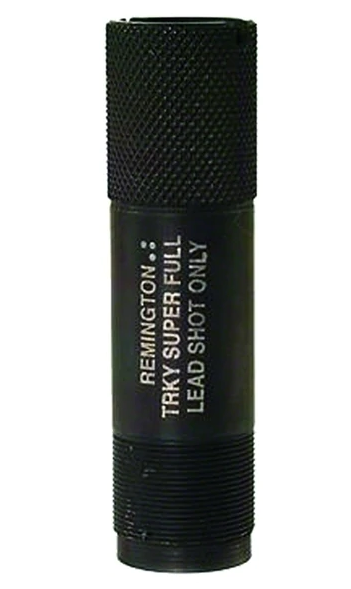 Originally, chokes were integral to shotgun barrels and were not interchangeable. Only a few short years ago, the most common turkey choke was the factory full choke. The integral full choked shotgun had an effective range of 30 yards to 40 yards depending on the shot sized used. As turkey hunting pressure increased ranges started to get longer for turkey hunters. Of the older style integral chokes, the Remington model 1100 full choke barrel would deliver excellent 2 3/4″ shotshell patterns for turkey hunting out to 40 yards.

Shotgun turkey chokes have evolved from the integral fixed choke into a threaded choke tube design that now comes standard in most shotgun barrels. While interchangeable choke tubes had increased the versatility of the shotgun, most did not offer tight enough patterns to be effective on turkeys at long-range. Today, turkey choke tubes have evolved tremendously and now play a very important role in extending the effective turkey hunting range of the shotgun. Turkey chokes today will pattern 80% plus in a 30 inch circle at 40 yards.

Their tight .727″ bore 12 gauge 26 inch special purpose barrels for three inch shotshells for the 870 pump shotgun, when coupled with their factory turkey chokes, will produce with Winchester Supreme turkey loads upwards of 90% patterns at 40 yards in a 30 inch circle.

Full Rem Choke: Tight, .691″ constriction for dense pattern, approximately 70% of a shotshell’s total pellets in a 30″ circle at 40 yards. Best for turkey hunting at short to medium range.

All of the after-market choke tube manufacturers have one or more types of tight patterning shotgun turkey chokes. These extended, tight patterning, extra full chokes can give you an extra 15 yards of killing range over a standard, flush mounted, full choke.

The nature of very tight constriction is that for good patterns, different size shot will perform in slightly different constriction turkey type choke tubes, heavier or larger shot sizes tend to perform better as a whole with less constriction than lighter weight or smaller size shot.

Extended turkey choke tubes have a longer parallel section, which allows the use of heavy shot loads by controlling the radial pressures of the shot column, thus keeping more shot in the pattern.

Barrel length is something to consider as well when trying to figure out what choke tube to use for turkey hunting. Very short shotgun barrels have a very hard acceleration value to them that requires tighter choke constrictions for good turkey patterns and porting helps 20 to 22 inch barrels tremendously, hard on hearing but effective.

Carlson’s extended turkey choke tubes extend approximately one inch from the end of the barrel. These super-full choke tubes have been specifically bored to deliver dense, full patterns at both short and long ranges for turkey hunting.

They are manufactured from 17-4 heat treated stainless steel and have a black finish. These chokes feature a 1.05″ length parallel section designed to produce an optimum pattern.

Carlson’s turkey choke tubes are recommended to be used with lead shot, copper plated shot and Hevi-Shot only. (No Steel Shot).

This chart is to be used as a good starting point for excellent patterning results using Carlson’s turkey choke tubes.

Pattern Master tubes have a unique patented design which actually slows the wad, effectively separating it from the shot column as it leaves the muzzle, producing tighter and more consistent patterns.

Patternmaster’s code black shotgun turkey choke tube combines constriction with patented wad-stripping technology that increases down range energy for greater knock down power. Plus, the unique canoe-porting reduces recoil so hunters are back on target faster and the porting also allows the use of ammunition containing a flight-control wad where normal ported choke tubes and barrels are not recommended. The code black turkey choke tube will extend out the end of your barrel one and a half inches and tubes have a .075″ constriction from barrel diameter. It will deliver an expected extra full shot pattern. Recommended to be used with lead shot, copper plated shot and Hevi-Shot with a velocity of 1,550 feet per second and below for best results.

Comp-N-Choke’s turkey choke tubes are computer (CNC) machined for precise tolerances and are made from high quality 17-4 grade stainless steel. The extended, slot-ported choke design of the chokes slows the wad which allows the shot column to get out and away without the wad flying into it and distorting your pattern. In addition, the porting vents the gases to relieve back pressure. This wad stripping and venting action works in tandem with the unique internal configuration to bring the fliers and stray pellets back into your pattern, increasing pattern density. This increased density and pattern quality allows you to use a more open constriction, usually one full choke size, without diminished performance. The extended design allows for easy field installation and quick tube changes. These turkey chokes are offered in several constriction sizes for precise patterning.

Trulock’s turkey choke tubes offer the shotgun turkey hunter a variety of constrictions in extended choke tubes, ported and non-ported. Trulock also offer hunters a choice in a flush mount pattern-plus choke tube for turkeys as well, very unique. Federal #7 heavyweight shot is gaining popularity and Trulock has developed a line of turkey choke tubes in their most popular designs specifically for this shell too.

To give you an idea of their excellent selection, I chose the Remington 870 12 gauge shotgun listing for their turkey chokes:

Kick’s Gobblin Thunder turkey choke tubes are the world’s most well known and the original extended angle ported turkey chokes. Kick’s chokes are manufactured from the highest quality 17-4PH stainless steel and have a matte-black finish. “Gobblin Thunder” chokes extend from the barrel approximately 1 3/8″ and are angle ported to reduce recoil and deliver extremely tight and consistent patterns.

To give you an idea of their excellent selection, I chose the Remington 870 12 gauge shotgun listing for their turkey chokes:

This product has been field tested for optimum .675″ diameter producing super full choke patterns as it puts 90% of the shot, in a 30″ circle at 40 yards.

All Indian Creek Shooting Systems choke tubes are precision engineered and CNC machined to the industries tightest tolerances. This attention to detail is quite noticeable with clean machining process’s and amazing shot pattern density. Part of the secret to their success is the 30 parallel ports which quickly ventilate gasses and stop wad rotation. This can be proven by the 30 cuts in a wad after the shot.

The tubes also act like a muzzle break and greatly reduce felt-recoil. Indian Creek Shooting Systems Choke Tubes are available for most manufacturers shotguns in both 12 and 20 gauge models including; Remington, Winchester, Benelli Browning, and Mossberg. The Strike will accommodate all lead and hybrid heavy loads with shot sizes from #4 through #9. The Strike has been proven to increase pattern density by over 40%.