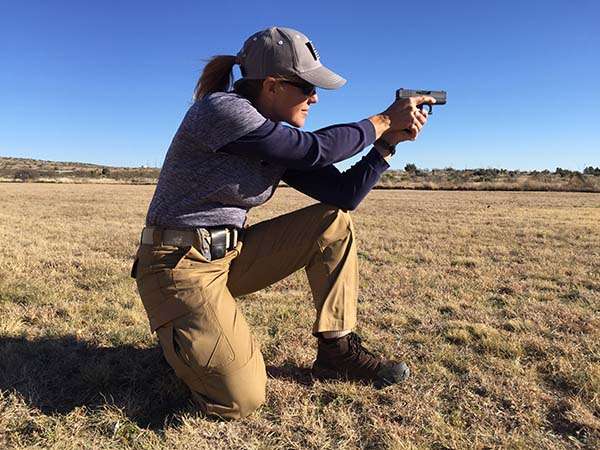 As a bona fide range rat, teaching classes and doing gun and gear reviews on a weekly basis—I’ve long been frustrated with the lack of choices and features in so-called tactical wear. That changed in summer 2017 when the Propper company, of St. Louis, provided samples of their summer weight shirt and pants. In these new interpretations of range and duty wear, I no longer struggled with typically frustrating symptoms of wearing typical tactical wear. Problems like:

– Shirttails that come untucked when I bend or stretch;

– Constantly re-tightening my belt because the gun has been pulled too low to draw or carry comfortably thanks to a rise that’s too low;

– Bending over like a baby giraffe, legs straight and split, because stiff pant material was pinching me, and,

– Having to stand with my arms out to let some air into the sweaty places in order not to have ugly, offensive wet marks—

All went away. The cut and construction of Propper wear eliminated issues like the ones above, common complaints by both men and women who wear range clothing for work, competition, or recreation. As a female, it was refreshing to wear pants that have an actual waist that doesn’t gap in the back when doing stuff like kneeling to shoot, not to mention the inclusion of generously-sized pockets, a feature notoriously absent from most women’s clothing and, sadly, fading in popularity from men’s sportswear as well. 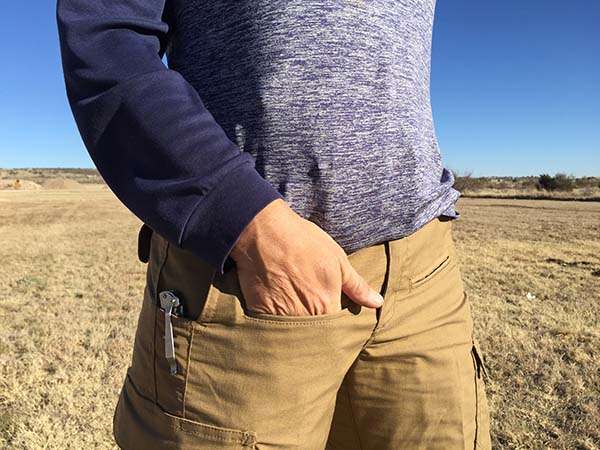 No doubt pleased with the positive feedback I provided, the folks at Propper sent a second set of clothing for review, their Kinetic pants and 314 women’s sweatshirt. I’ve been wearing both for a couple months, on the range and around town, though I confess I’ve spared them from heavy chores—they are, after all, professional-looking for the teaching part of my work, and I rather like keeping them that way.

Like the summerweight pants, the Kinetics are a go-to fave when I want to look professional and still be able to move. There are handy slots and pockets on the outside of the cargo pockets, and two additional narrow slot pockets on the side, perfect for a folding blade. The openings are just big and rigid enough that I can wear the shot timer on them as well. 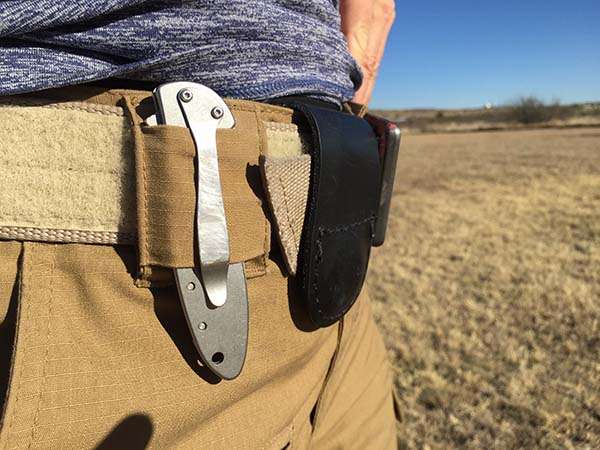 The cargo pocket flaps lay flat, even after several washings. The hook/loop closures are placed well into the pocket flap corners to insure they don’t get curly. Inside the big pockets are magazine slots, handy for keeping that extra mag upright and ready, but no replacement for a belt-mounted pouch.

These pockets are designed with a gusset that makes them roomy, but tacked down in all the right places so as to keep the profile looking slim and smooth. After all, who wants to look like a slob? The rear pockets are open and contribute to the streetwear look of these pants. The steel zipper and snap haven’t presented any problems yet, and that includes wearing the pants with too many layers tucked into them on frosty mornings when I still wanted to be fast on the draw. Like the summerweight pants, I can bend in these without major gapping, and they don’t even have elastic inserts. They’re just well-designed.

Washing the Kinetics has made them slightly softer, but they still come out of the dryer looking pressed if I fold them properly. Thanks, Propper—how did you know I hate ironing? The 65 percent polyester/35 percent cotton blend is just right.

My only complaint about these pants is the placement of the belt loops. They’re wider, and thus stronger, than normal, but that also limits placement of waist-borne gear. I’ve found it impossible to place the mag pouch in a forward position, favored for competition and other things that require efficient reloads, without blocking the way into the front slash pocket.

Set behind the midline belt loop, they’re a little too far back for speed work. Since my belt holsters will straddle the big loop, I haven’t had the same problem with the gun holster, just the mag pouch. Pick up a pair of Kinetic pants for $54.99 from Propper’s website, whether you’re male or female. 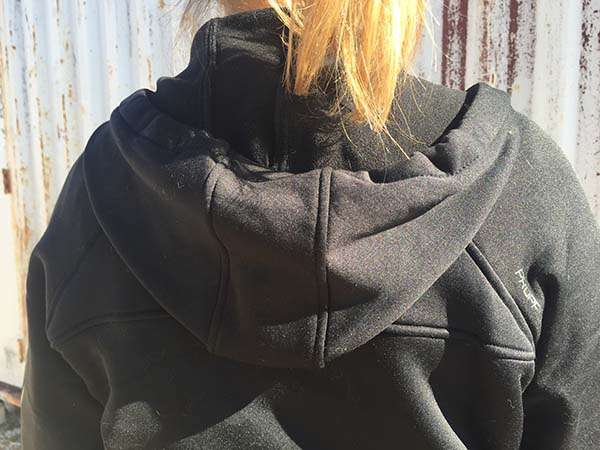 With the weather being cooler, I’ve also been wearing Propper’s 314 hooded sweatshirt. It’s a zip-up design with slash pockets, a hidden, smaller-than-fist-sized pocket in the right side seam, and one zippered upper arm pocket. It’s a cozy piece for warming up before a cold morning workout, or dashing into town for an errand. I’ve been less than crazy about it as range wear.

Propper made a noble attempt to make this jacket gun-friendly by creating an open gap between the loose pocket lining and where the hand enters the pocket. With effort and with a smaller, belt-height holster and some effort, you can work the jacket around the gun so the entire holster and gun are exposed and easy to access/re-holster.

Unfortunately, this design also makes the shallow pockets easily dump out contents. I didn’t’ realize they were this way and was surprised the first time my phone plopped out onto the ground as I walked. If the plan was to go for draw-friendly design, a little weight in the bottom front corner of each side of the zipper would work, so the wearer can perform the IDPA sweep wearing the jacket unzipped. 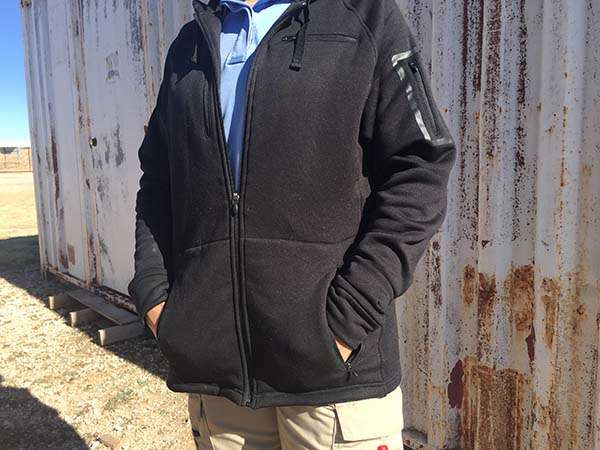 The zipper is sturdy and has worn well through lots of wear and two washings. The jacket is roomy and allows for ease of movement, unlike another brand’s so-called women’s tactical wear that seems to insist that our body outline be visible even in a coat. It comes in black and aqua blue, the former being a little too good at showing lint and pet hair; the former being a little loud for women who can play the so-called gray man game.

More choices would be nice, but I recognize I’m probably in the minority in this department. Though this is called a women’s jacket, it’s a simple zippered sweatshirt fit that could as easily fit men—who’d probably, rightly, reject it for the non-functional pockets. This sweatshirt is comfy for cool weather, but falls short of the expectations I’ve come to have of the Propper brand. It’s more than worth the $19.99 sale price, but at the normal $49 mark, I’d give it a pass. 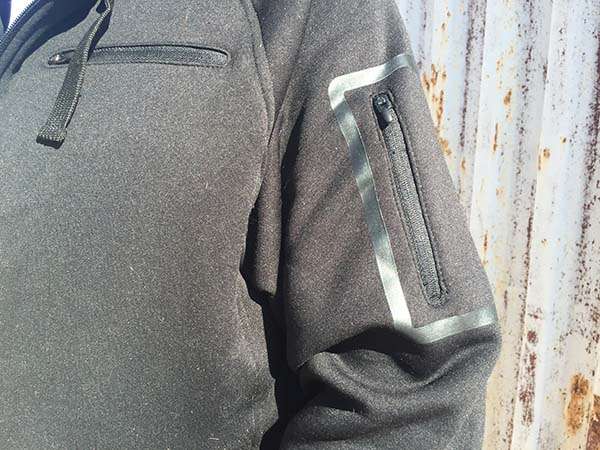 To date, I’ve given hard tests to three of Propper’s pant offerings, two shirts, and one jacket. That only one is considered less than stellar is a great record. I’m grateful for this company’s approach to design, both as firearms professional and as a female. A big-name competitor shamelessly markets their women’s wear at prices that are double that of similar items in the men’s line. Propper’s designs put function before fashion, while keeping the look professional and comfortable.