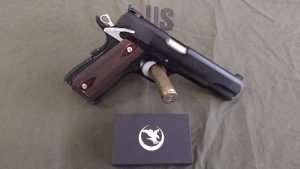 I have a well documented love of the M1911/A1 pistol. I have loved the platform since my pre-teen years and have written of my first firearm love several times. It is, in my opinion, one of the finest firearms designs ever put on paper and into production.

The 1911 has been used by several generations of Americans as a service pistol, law enforcement sidearm, personal defense weapon, and competition pistol. It was the pistol that Jeff Cooper had in mind when he was devising the rules of what would come to be known as the International Practical Shooting Confederation (IPSC), the oldest sanctioning body for practical competition shooting.

The 1911 is also the most common pistol in use for NRA Bullseye competition due to its crisp trigger and inherent mechanical accuracy.

Over the years many improvements to the basic design of the 1911 have been designed and marketed and numerous manufacturers have marketed pistols for competition, service use, and personal defense.

There are countless accessories and widgets available in the aftermarket that are “guaranteed” to make the 1911 a better pistol. Some are great ideas, some not so much. Entry level 1911s start under $400 and high-end custom pistols can often be priced well out of the reach of us serfs. 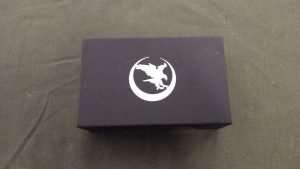 I like to spend my last day at SHOT Show checking out what is new in the world of the 1911 and let’s face it, after nearly 110 years there really isn’t much new. Just about everything you can think of has been done, so I wasn’t expecting anything earth-shattering when I stopped by Nighthawk Custom’s booth.

Needless to say, I was in for a surprise.

A custom tuned trigger is one of the most sought-after gunsmithing jobs for the 1911, and some gunsmiths have made a living out of tuning match-grade 1911 triggers. Some companies have even gone as far as marketing pre-matched hammer, sear, and disconnector kits for a drop-in trigger job.

But they’re still comprised of separate parts that had to be installed separately and the installer still had to switch the hammer strut from their original hammer, which in my opinion makes them a little less than a “drop-in” part. 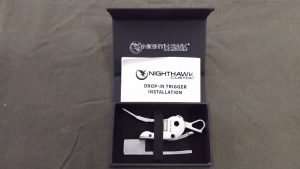 Those of you who are familiar with the AR platform have seen and probably used true drop-in trigger packs from companies like Timney, CMC, Triggertech, and others.

But up until now there has not been a true “drop-in” trigger pack for the 1911 platform. Nighthawk Custom just upped the ante with their revolutionary Drop-in Trigger System (DTS). It is the product of several years of work and it truly makes doing a match-grade trigger job extremely simple.

I was really excited to see something new for the 1911 so, as soon as I got back to where we were staying, I got on the interwebs and got one ordered. Three days after my return from Shot Show the box arrived at my house.

So like any sane person would, I dropped everything I was doing at the moment and scuttled off to the gun bench to get it installed in one of my 1911s. 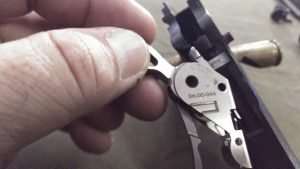 Initially I wanted to see how it would work in an entry level priced gun so I broke out my test mule, a Rock Island Armory (RIA) GI Series 1911A1 in .38 Super.

Out of the box, the RIA GI Series is a fine example of the genre, with a crisp 4 ½ pound trigger (I checked it with my Wheeler trigger scale) that really needs no tweaking as far as I am concerned, but I wanted to see if the Nighthawk DTS would make a noticeable difference.

The Drop-in Trigger System is a self-contained unit consisting of all stainless-steel parts that includes the hammer, hammer strut, sear, and disconnector.

It also comes with a replacement leaf spring that only has one leg to operate the grip safety, the other 2 legs have been deleted since the trigger and sear/disconnector springs are also contained within the DTS. Nighthawk Custom advertises the DTS as a 3 ¾ – 4-pound match grade trigger, right out of the box, depending on the mainspring weight.

They also recommend a 100-round break in period which allows for final break-in of the stainless-steel internals. 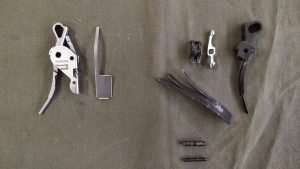 The DTS replaces the following factory parts, the hammer and strut assembly, sear, disconnector, and leaf spring. The hammer pin and sear pin are retained to install the DTS and the fact that the DTS is a self-contained unit removes any lateral movement from the sear and disconnector which should make for a very consistent trigger pull. Instructions for installation are included with the system and are very easy to follow, I also did a video of the installation so you can see exactly how easy it is to install the DTS. Here is the video:

The only issue I found was that the factory thumb safety on my Rock Island required a slight adjustment for it to operate correctly, but if you can properly fit a thumb safety on a 1911 than installation of the DTS should be an easy task. 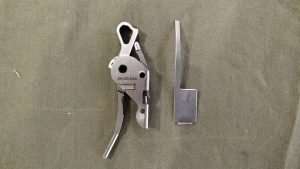 How does it work? Well I re-checked my trigger again after installation and the weight was reduced to right at the 4lb mark. The trigger break is very crisp with a very short and pronounced reset. As a matter of fact, the crispness of the trigger break makes it feel lighter than it actually is.

Then next day I took it to the range to get some break-in rounds under its belt and I was very pleased with the way the pistol shot. Now the simple fact is that a good trigger has absolutely nothing to do with the accuracy of any firearm.

What a good trigger does is make it easier for the user to shoot more accurately by removing impediments to being able to squeeze the trigger until it breaks without moving the sights off target. It can and does, in the case of my Rock Island GI model, turn a good gun into a really good gun. 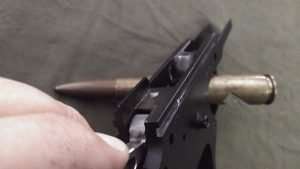 Nighthawk’s Drop in 1911 Trigger in Franken-Colt

Now since the Rock Island had good trigger out of the box, I didn’t have any intentions of leaving the DTS in it for any longer than it took to test it out and shoot a video. But I did have other plans for it when I bought it, so when 100 rounds of break-in shooting and the video review was done, out it came.

A while back I made a deal for a 1973 vintage Colt Government Model, Series 70 pistol that had been rebuilt as a carry gun with some decent parts, and some that were not so decent.

When I stripped it down for a detailed inspection, I found that the parts that make up the firing mechanism had apparently been filed and stoned by a one-eyed crazy man with a pure hatred of all straight lines and flat edges. 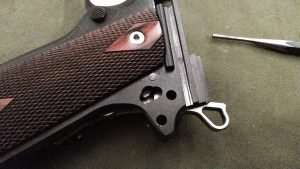 The sear appeared as though it had been rounded over with a router bit and the disconnector blade was shaped like a miniature shovel. I am not certain how the pistol could be fired in its present condition.

It seemed like a logical home for the Nighthawk Custom DTS.

After some digging through my spare parts bin, I also came up with the following:

A couple of evenings worth of cleaning, fitting, checking, and refitting of parts and the project was finally done. Now all I had to do was take it to the range and see if it would hold a group, whether it was worth the effort, and whether it was worthy of the most expensive part of the build, the Nighthawk Custom DTS.

A couple of days later I made a stop at Sportsman’s Lodge to test fire the pistol and to see if it was would exceed the sum of all of its parts. 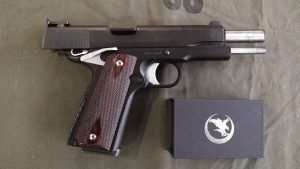 I must say I was even more impressed with the performance of the DTS in the Series 70 Franken-Colt than I was in the Rock Island. The trigger felt even crisper and with almost no overtravel and a very short reset which made controlled pairs very easy to keep in the vitals area of the silhouette target I was shooting at.

I fired roughly 70 rounds of ball ammo that day that I had leftover from previous range trips and my shooting was basically to test fire the pistol and get the Nighthawk DTS over the 100 round break-in hump.

My shooting that day was done from 7, 10, and 15 yards and while I will not be winning the Bianchi Cup anytime in the near future, the grouping was adequate for my purposes, which is personal defense.

After test firing my “spare part special” I brought it home for a cleaning and inspection. After a good cleaning I decided to put the DTS on the scale and see what the trigger pull actually is in this gun. 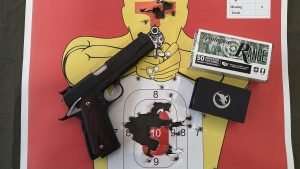 I was honestly a bit surprised when after 10 pulls with my trigger pull scale, I ended up with an average of 4 ¼ pounds on the trigger. It really doesn’t feel that heavy when firing, which I am guessing has to do with the fact that it is a smooth pull with the proverbial “glass rod” trigger break.

At this point I have fired roughly 170 rounds with the Nighthawk DTS and I am really liking it, and considering the results from the test fire of my current build I am looking forward to more time on the range with my Franken-Colt.

The Drop-in Trigger System is available directly from Nighthawk Custom for the list price of $299.99, and is backed by a 1-year limited warranty. If you are looking for a great upgrade for your 1911 trigger then the Nighthawk Custom DTS is definitely an investment worth looking into.