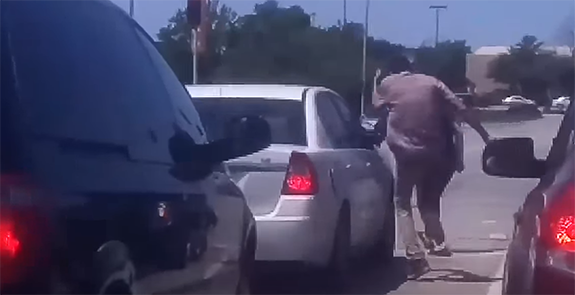 The common human response to crime is usually something along the lines of: “I can’t believe that happened in this town.” Or, “why me?”

We see it all the time on the news. A journalist interviews a witness or local after any serious crime, and the answer is usually the same, or something very similar to what is typed above.

Of course, those of us who carry a self-defense tool, like a gun, don’t usually share that response. In fact, the main reason why most of us carry a gun is because we know that crime does happen and we want to be ready for it when it does.

More often than not, it usually happens when we are least expecting it. And that, my friends, is the main reason for being prepared and ready to defend yourself with your gun of choice.

Wherever you are, from your house to the grocery store, you need to be aware of your environment, able to recognize anything out of the ordinary. You also need to know where you should (or not) go, when you leave the house.

While crime can happen just about anywhere, there are some places more prone to it than others. I’ve attempted to compile a list of the most common places for crime based on some research I’ve conducted over the years, and patterns I’ve seen in defensive gun uses.

Okay, so you can’t avoid a gas station unless you ride a bike to get around. Nothing wrong with that if you do, but chances are good that this isn’t the case. Many different types of crime come in the form of gas station robberies.

One type of robbery happens inside the store part of the station, where a convict holds up the people working at the register. This is common for many other convenience stores, as well, so I guess I’m going to lump them in here.

To combat this, I limit the amount of time spent in these places as much as possible. I almost always pay at the pump, unless I need something from inside. If that’s the case, I move as quickly as possible, paying attention to as much as I can, while I shop and pay.

Another form of robbery, happens when mindless folks are pumping their gas, or go into the store. Some people tend to leave their cars unlocked with their backs turned, and never even see it coming. This type of robbery is usually non-confrontational unless the victim happens to turn around at the right moment.

To combat this, remove your keys from the ignition and lock the door behind you when it’s your turn at the pump.

Then again, sometimes something like what happens this next video breaks out:

There is something about shiny stuff that makes criminals want to steal it. Now, I’m not talking about the jewelry stores inside a large mall. Criminals usually target jewelry stores that are a small, stand alone buildings or in a strip mall.

The main reason for this, is because it’s hard to rob a store in a mall, and make a getaway on foot. Everyone sees the criminal and there are that many more instances that can go wrong for the robber.

Then again, as we’ll see in a few minutes, criminals aren’t the smartest bunch, and you can’t rule anything out. The nice young gentlemen in this next video picked the wrong shop:

The thing to remember, however, is that a key ingredient to *most* robberies is access to a quick getaway, and that’s hard in a mall. When you’re buying your sweetie something precious, try to pay attention to your surroundings or just avoid jewelry stores in strip malls altogether.

I’m not sure what it is, but people love to rob pizzerias and pizza delivery drivers. At the last site I managed, my good friend and freelance gun writer, Eve, spoke about pizza places getting robbed in great detail.

First, if you deliver pizza for a living, I cannot tell you that you should carry a gun while you work if your employer tells you that you cannot.

What I can do, however, is tell you that they wouldn’t be able to stop me from carrying my gun at work if I delivered pizza for a living. I value my life to much to be killed for some tip money. That decision, however, is up to you.

Here is a video of a robbery taking place in a Pizza Hut, of all places:


Now, if you find yourself in a Pizza Hut that is being robbed, there are some things you should know. Always know your surroundings. When you walk into any food establishment, take your surroundings in. Look for anything out of the ordinary and make a mental note of it.

When you sit, request to be sat as close to the corner or wall as possible so you can monitor anyone who may be looking to rob the place. Whenever we go out to eat, my wife knows that I have to take the seat that looks upon the entrance and most of the floor to see if anyone begins to hurt people. Then, I can act appropriately.

You’d think that going into a business that sells guns would be a red flag to a robber that, gee, I don’t know, the people who work there might have guns. Oh, and so might the people inside who don’t work there …

Then again, criminals aren’t the smartest bunch of people.

When people are desperate enough, though, they tend to do some stupid crap. Always remember that a desperate person is willing to do whatever they must to survive, to include, apparently, robbing a gun shop as well as making sure nobody is left to talk about it.

Most gun shops have an open floor plan so the people behind the counter can see what’s going on and act appropriately.

I know it’s hard when you’re drooling on the glass counter, but the main thing is trying to remain in a state of awareness that points out when something is wrong.

There is actually a bank in my town that has been robbed at least three times that I can think of, maybe even more than that during the time I’ve lived here, and it’s only been 6 years. It’s not the only bank in town, but the others are literally right across the street from the police station, or one block away.

Remember that anywhere large amounts of money are stored can be enticing to criminals looking for the easy way out. Whenever you enter a bank, it’s a good idea to get a feel for what’s going on inside by glancing around. If people look uptight, or are rigid there might be something out of the ordinary taking place. If everything seems fine, take a mental note of those in the bank, and if anyone comes inside.

Whatever you do, though, try not to be like this guy if you ever find yourself staring down the barrel of a gun:

Your head should remain on a swivel. In fact, when I’m in a bank, I never face front. I always face to the side keeping my peripheral vision on the door and on the clerk in front of me. That way, I can still carry a conversation while keeping an eye on everyone who comes in.

The second a ski-mask wearing individual pulls a Tec-9 out of a trench coat I’ll be aware of it, and better able to put him down.

Then again, I rarely find myself in a bank, these days. Instead, all of my transactions take place at the ATM outside the building. Again, peripheral vision is key, and so is the little mirror in the upper corner of the machine, itself.

We all feel safe in our homes, but this should not be. In any area of the world, your house can be broken into whether you’re there or not. Your doors should remain locked, even if you’re inside, and you should carry a gun in your home.

The main reason for this, is because if a burglar comes into your home you have to assume that since he broke in, he is also willing to make sure there are no witnesses to turn him in. When someone breaks in, your life is on the line.

I carry at least a small handgun in my pocket that is designed to help me get to a bigger, more powerful gun. But, I can fight back instantly, even while wearing my sweatpants. And, if I need more than the five or six shots loaded into my gun, there’s an even bigger issue at hand, anyway.

It’s also important to note that whether you’re home or not, many break-ins occur during the day, as we can see from the following video:

This one is tricky, because when most people think about a car-involved crime, they think of a break-in or car jacking. However, if you haven’t noticed, people are nuts.

I mean, look at these idiots:

To make matters worse, most people (except me) cannot even drive causing them to be road ragers. I think most of us have been on the receiving end of some road rage at least once in our lives. I know I’ve been numerous times.

In fact, just the other day after dropping my kids off at school some nut-job slowed way down and prevented me from passing him. Each time I tried to go around him he maniacally swerved to prevent it, but would let others pass without pause.

He eventually turned, but that’s a recipe for disaster. I don’t even know what I did wrong, because I drive like Miss Daisy.

If matters took a turn for the worse, and he approached me at the stop light instead of glaring at me in the rear view mirror, it would not have ended well.

The problem, is that people are unpredictable and are capable of doing any despicable thing at any time. I’ve witnessed a road rage encounter before in the quaint little town of East Orange, NJ where two men were about to duke it out with fists when one of them pulled a gun causing the other to (smartly) flee.

I’ve heard of break-ins where people are home, gas stations, jewelry stores, banks, gun stores, pizzerias, etc., all getting robbed with a weapon (either perceived like a finger in a jacket pocket, or real like a gun or knife).

Your state of mind, abilities, and access to your own weapon will determine the outcome if you ever need to defend yourself with your gun. It’s important to remain in a constant state of awareness so you can combat crime as it begins to happen. Otherwise, you won’t stand a chance.

Do you have anything to add to this list of most common places for crime? Have you witnessed crime anywhere? Let us know in the comment section, below.