Many gun owners put a lot of thought into their guns and holsters, but ponder very little about the rest of the carry rig, and the tactical gun belt that holds it all together. Well, I’m here to tell you that this is one of the most important considerations if you carry on your waist like most of us do.

Before we move on to the review of this leather gun belt, let me explain some things, and go over some housekeeping issues. First, a quality gun belt is one of the most important things you can buy when it’s time to actually start carrying your self-defense gun.

Why do I need a gun belt?

I’m glad you asked. There are a few reasons, but the main one being that a flimsy belt will sag under a gun that’s too heavy. When a gun sags, it can actually hurt your draw, show it’s outline in the dreaded print, or allow the gun to shift around as you move. Then again, if your belt is too flimsy, you may have to cinch it down uber tight, just to get the desired result of being able to hold your gun up.

That can be uncomfortable if too tight, as it starts to cut off your circulation just to do its job. If you go to sit down? faghetabout itttt! I’ve been there, with my former duty belt from my time as a corrections officer. Don’t get me wrong, that was a decent, leather belt that helped me during a time when it was all I had because my kid puked on my good belt and ruined it on me.

But as someone who has worn his fair share of belts in his day, like those nylon ones a few companies offer that do okay, but aren’t great, and the above mentioned duty setup, I can say that a gun belt capable of holding your gear in place is essential.

That’s the why. But, how is a leather gun belt better than a belt you’re gonna find at the local Walmart?

This is a bit tougher to explain, but I guess the short answer is that the leather is thicker and, therefore, sturdier than the cheaper ones you can pickup at the local big-box store. Many of them are also designed to not stretch out as much over time, so they last longer.

This makes the bigger price tag of a leather gun belt worth it. I know folks who have purchased cheaper belts each year for that reason–they’re cheap–but they don’t hold up to the continued strain of holding a gun, holster, mag pouch, etc. By the time they’re done spending money on the 3rd cheap one, they could have had a great piece of leather actually designed to do the job of keeping your gun in place that lasts for a long time.

Not all gun belts are of the same quality:

Don’t get me wrong here, most of the ones that are designed for for concealed carry are better than the cheap one you can get at your local big box store. I’ve found that good ones generally fall in the price range of $60-$120, with a few exceptions. The best gun belts are actually really stiff and made with two pieces of leather that are joined together.

More, sometimes you can find a “reinforced” belt that has some sort of strengthening agent inside of it to help keep it stiff. That’s the point of having a good, quality gun belt by the way: stiffness. In all honesty, though, I haven’t found a need to have one that’s reinforced, like those found with a steel core inside, because the leather ones I use work so well.

Plus, my experience with reinforced tactical gun belts have suggested that they aren’t as stiff even though they are just as thick, and don’t hold the gun as well as an all-leather gun belt. One such belt that’s reinforced, is this one from Big Foot Gun Belts. Does it work? Yes, it does. It works much better than a belt you’d find at the local big box store, and I’ve worn this one around for several months.

It gets the job done. But, it isn’t as sturdy as some of the all-leather ones out there. You can see a bit of sag in this picture:

While a good option, especially if you’re on a budget, I can say that my go-to belt right now is the JM4 Tactical leather gun belt. Why? Well, there are a couple of reasons, but my intent here isn’t to bash one company and promote another. So, I’ll just say that JM4’s belt seems sturdier and comes with “Chicago Screws,” instead of snaps.

Again, nothing wrong with Big Foot’s Gun Belt if all you have is $60. But if you’ve got the money to spend, I’d go with something else.

We’ll leave it there.

A good, sturdy belt, like this one that I’ve had from JM4 Tactical for a while, will help to distribute the weight of your gun and holster across your entire waist, instead of just over where your holster sits. Not much gun sag from this belt:

Now, before we get into this any further, I do want to say that I am friends with the folks from JM4 Tactical. Good friends, actually. I’m also an affiliate of theirs, but I’m not including an affiliate link in this review. This is an honest review, and the belt isn’t perfect, as we’ll see in a moment.

As far as gun belts go, you want something that’s up to the task of handling additional weight. Usually, something that’s thick and, therefore, sturdy that will help distribute the weight of your entire rig.

As with many things in the concealed carry world, there is a give and take attitude. If you desire comfort, you carry a smaller gun at the expense of cartridge effectiveness or magazine capacity. If you want a gun belt that looks good in anything you wear and holds your gun up correctly, you’ll need to sacrifice some comfort. If you’re coming from a regular thickness belt and going to this one, it’ll take some getting used to. 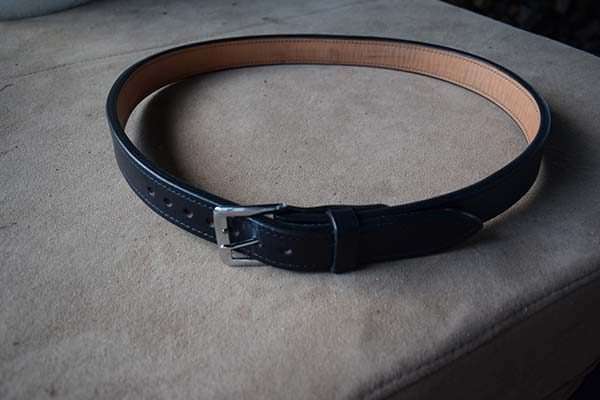 It is sturdy and holds my gun up on my waist as it is supposed to. The stitching that holds the two layers of leather together is clean and works well, but this is the sort of thing that wouldn’t wear out right away. So, I’ll likely do a follow up review of this one in about 4-6 months, just to show you what it looks like after months of use.

So far, I’ve been wearing it for about 2 months, and it’s holding up great. The usual wear marks are taking place on the top by the buckle, and on the tip where the leather slips through the buckle, but all belts do this. The most important factor of any tactical gun belt is that it hold up your rig and not come undone when you’re not expecting it to.

That, by the way, is one of the downsides to using snaps instead of “Chicago Screws.” You want your entire rig to be as sturdy as possible, and snaps, while they start off strong, tend to wear out over time. The last thing I hope you’d ever want to have happen, is rolling around on the ground with an attacker when your belt’s snaps come undone.

Is it far fetched? Sure it is. But, I don’t leave anything to chance.

The JM4 Tactical Gun Belt holds my gun up right where I put it, and it stays there. Personally speaking, $85 is a small price to pay for a piece of quality leather that’ll last many years to come. Here is a link to their Double Shot Belt page, for more information. Again, I’m an affiliate, but that’s not a link I’ll get credit for.