The folks who brought us the venerable Desert Eagle have also given us a smaller, tamer version of that monster in the form of the Baby Desert Eagle. The one Magnum Research sent out to me is the polymer-framed version of the full-sized pistol, with a 4.43 inch barrel chambered for .40 S&W. This gun came to me in a hard case, two 13-round magazines, and some cleaning gear.

The 28 ounce gun fit great in my hands, but I tend to like finger grooves. While the one I was sent was chambered in .40 S&W and is not the best self-defense cartridge for recoil-sensitive people I can imagine it would be a dream to shoot in 9mm for any recoil hating shooter. Also keep in mind that this isn’t as snappy as most other forty cal pistols are, so take that for what it’s worth. 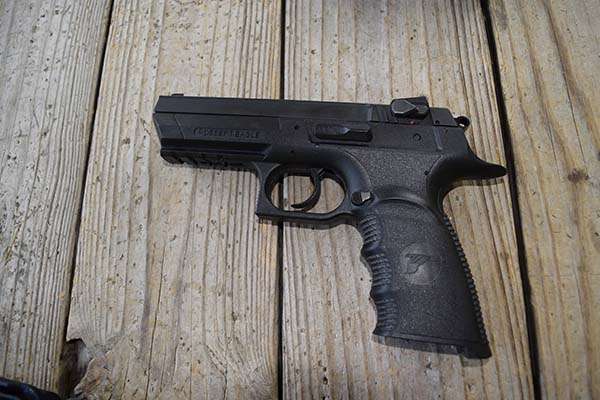 As far as accuracy is concerned, it is center-mass accurate out to my max testing distance of 15 yards in rapid fire drills. Please keep in mind that most defensive shooting takes place at much closer distances than that, making this polymer, hammer-fired gun more than sufficient for home and self-defense.

Again, the one they sent me was polymer framed, but there are other Baby Desert Eagles available, to include those full-size and semi-compact pistols and an all-steel framed version. You can purchase the steel Baby Desert Eagle 3 model in three different calibers: 9mm, .40 S&W, and .45 ACP. As a side note, the steel version does not have finger grooves.

Those of you who prefer a hammer fired pistol in SA/DA (single action, double action) will appreciate these Baby Desert Eagles, complete with de-cocker. Speaking of the de-cocker, it did take some getting used to, at first, because it’s the only thing to grab onto when pulling the uber thin slide to the rear.

When I say “uber thin,” I’m talking about the overall height of the slide, not the width. Magnum Research decided it was time to make this model look more like its big brother and redesigned it, ultimately thinning out the slide considerably. There just isn’t that much to grab on to, and if I had to come up with a main complaint, that would be it.

The overall smaller size of the slide forced me to grab the de-cocker, itself, in order to pull it back which was not ideal. Also making things a bit more interesting, are the virtually non-existent slide serrations. What little bit can be seen are nearly useless because of the shoddy location of the slide mounted de-cocking mechanism.

All of this isn’t really a big deal, once you figure out that it isn’t what you’re used to, and need to adjust for it and train hard with your new carry piece. As far as reliability is concerned, it doesn’t get much better. I had this Baby Eagle for several months and can’t report on a single malfunction. It ate everything I threw at it like a starved animal.

As tested, the Baby Desert Eagle 3 has an MSRP of $646, with the steel framed models ranging up to $691. And, in contrast to the polymer framed gun, the steel one weighs in at nearly 10 ounces more at 37.9. 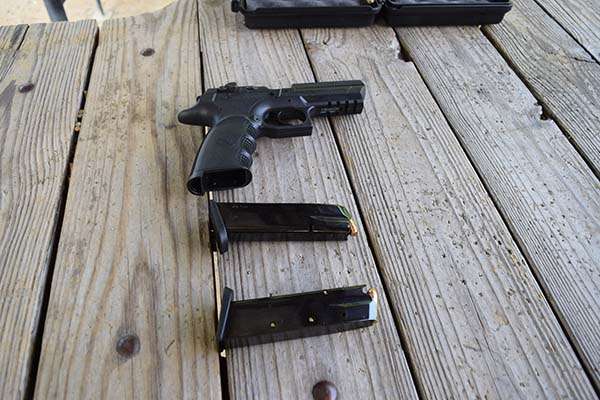 Baby Desert Eagles have a smooth trigger without any noticeable grit or stacking, with a 12 pound pull in DA, and 4 pounds in single action. While the trigger is a gripe for some folks, because it’s long, I really had no issues with it.

The disassembly is easy, the three dot sights do what they’re supposed to do but are nothing special, and the Baby Desert Eagle comes with an accessory rail if you are a fan of mounting lights and lasers to your handgun. If you’re in the market for a new gun that isn’t your average Glock or 1911, this hammer fired pistol may be just what the doctor ordered.

If you need more information on this, or any of the products Magnum research offers, you can visit their page here. Otherwise, let us know what you think about this handgun in the comments below, and make sure you check out our article about the top 20 best 9mm, to see if yours in on the list.