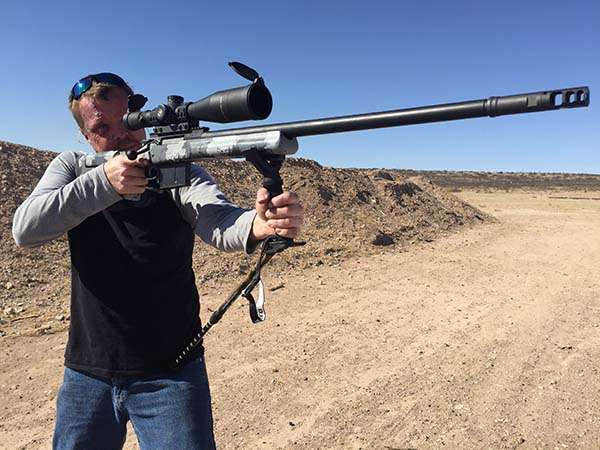 Texas-based TruGlo, normally a gun sight and optics maker, has stepped outside the box with the HipShot, a new assistive device for long gun and crossbow shooters.

The HipShot is a portable, adjustable monopod. I was first introduced to this gadget at a gun writers’ conference, where the TruGlo rep handed a HipShot my way as I was about to shoulder an AR 15. “Gadget” was exactly the word that came to mind, and being a good sport, I put one end on my hip and extended the telescoping stick so that the V-shaped end cradled the rifle. With eyes on the crosshairs, I was stunned. They weren’t moving.

That moment of discovery made me an instant fan. The Hipshot virtually eliminated not only the strain of supporting the rifle on target, it erased all but the tiniest natural arc of movement that’s present when firing from any unsupported stance.

The HipShot was inspired by photography enthusiasts at TruGlo, whose use of a camera tripod led to a vision of a similar device for firearms and crossbows. It’s a simple affair, with one end being a shallow U brace atop a grippy, ergonomically shaped handle. The handle/brace flex to achieve stability and comfort. At the other end Is a rubber-footed anchor point. It folds down to just over a foot long, and has a carry strap. A twist of a collar around the device locks it into position at any chosen length.

With a HipShot in hand, my friend Zach and I tried out the device with his CGS Group 338 Lapua target rifle, a heavy bit of iron! The HipShot made it possible for me to stand and hold the rifle in firing position, which I was unable to do under my own power, which includes a chronic wrist injury. Zach really liked the stability, along with the ability to follow a moving target, using the HipShot while kneeling.

The HipShot lightens the load of the rifle when substituted for a traditional bipod, and works almost as well, with the caveat that a single point of contact with the ground is a bit less stable than two.

The sole time the HipShot didn’t seem helpful was when firing from a sitting position, as shown on the product packaging. We tried propping the gun between Zach’s support side leg and the forend, but that was surprisingly unwieldy. A strong-side prop was equally disappointing.

Other than seeming ineffective in the sitting position, the uses for this simple, approximately one-pound device are many. For fatigued hunters or use in stormy weather, the HipShot stabilizes a firearm or crossbow. For anyone with injuries or some other limb weakness, it offers invaluable support and the ability to fire from positions maybe not otherwise possible. For the minimal trouble to carry it to the range or afield, the HipShot offers unprecedented choices for stabilized shooting.

Retail prices are around $35 on online outlets.