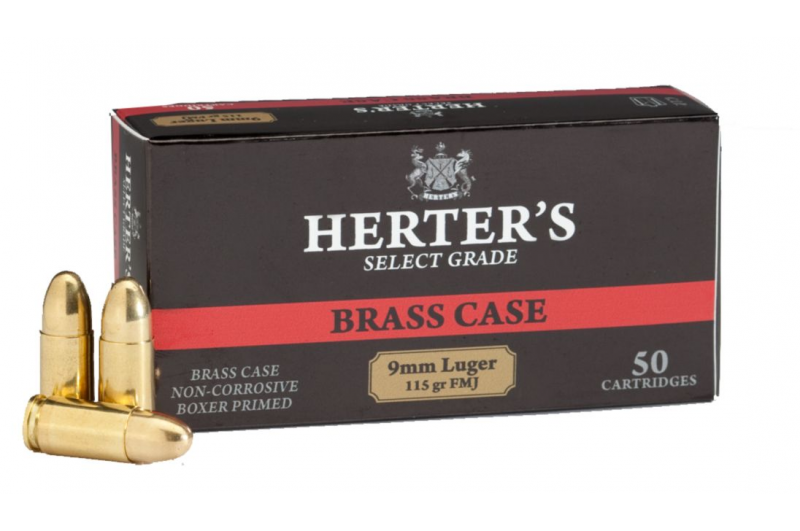 In 1937 George Leonard Herter (heir to the Herter’s outdoor goods business) took his father’s dry goods store and turned it into a mail order outdoor goods business, selling hunting and fishing items through a catalog. Herter over the next four decades built a mail-order sporting-goods juggernaut. He later opened retail outlet stores scattered throughout the upper Midwest which pioneered the style of outdoor goods stores now used by Cabela’s and others.

Herter’s was a successful importer, distributor, and retailer headquartered in Waseca, Minnesota from early 1960s to 1979. Herter’s subcontracted various manufacturers (mostly European) to fabricate various items for the sporting-goods industry to offer Herter’s customers a better value on many hunting and fishing items.

Most of these items were copies and were designed to undersell the competition. Quality in most cases was quite good, including ammunition, consumer sales were not strong enough to continue production on some models. Herters model values are usually under the original trademarks from which they were derived and to date have been based more on the shooting utility than the collector potential.

The annual two-inch thick Herter’s catalog, was, not just a standard source of camping gear, fishing tackle, reloading gear, fly tying hackle, trapping and taxidermy supplies, the Herter’s catalog was a long term reading that found its home on the coffee table of many American sportsman’s homes providing good reading for countless hours while at home.

The Herter’s mail-order catalog, was a three-ring binder with about 400,000 or 500,000 copies per run, Herter wrote all the copy for the catalogs.

Federal enforcement of a ban on the trade in feathers of endangered species (used for fly tying) took no cognizance of material stockpiles dating to periods long before the ban, and George Leonard Herter was a hard core sportsman who simply could not bow to irrational regulation. Reports were that federal lawsuits and seizures, based on one small particular type of feather entirely legally owned and acquired in the first place, ruined the famous company.

Herter’s Statement: “Thank you for your interest in Herter’s. Recently, we made the decision to have another company handle the distribution of Herter’s products.
Naturally, we wanted to ensure that our customers would still be treated to the best service possible. With that in mind, we are pleased to tell you that the exclusive distributor of Herter’s products is one of the most trusted names in the outdoor industry – Cabela’s.”

The price for those that love to shoot semi-auto’s and full-auto’s can be quite high, in keeping with the Herter’s tradition of seeking out worldwide for the best price of good quality ammunition, that price can now be lowered considerably with Herter’s low cost ammo distributed by Cabela’s.

Herter’s low cost ammunition may not be for everyone, the majority of shooters will find that Herter’s bulk ammo is quite reliable and functional. If you are in doubt about this ammo just buy a small quantity and try it, if its what you are looking for in affordable ammunition, next time buy larger quantities.

You can find Herter’s Ammunition, here at Cabela’s, as well as here at Bass Pro Shops.

Learn about the USCCA Insurance, here.