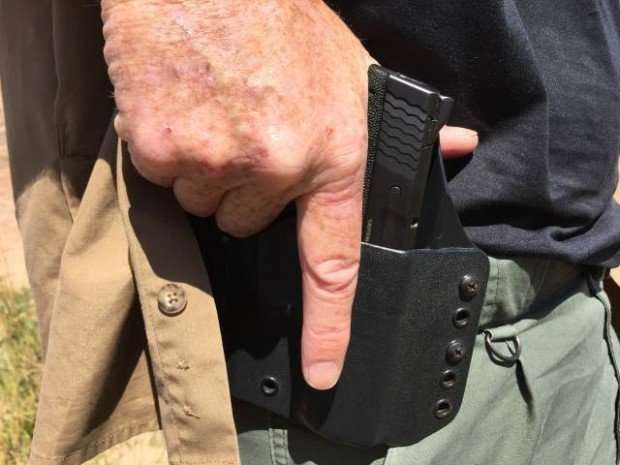 Arguably one of the best things you can do to up your proficiency as a defensive shooter is to use a shot timer to gauge your progress of both speed and accuracy. The main reason being, if you react quickly during an attack and have the ability to put shots on target in an accurate fashion, your chances of living go up drastically.

A shot timer allows you to set a benchmark, and continue to train towards an end goal of quick proficiency. Sadly, many shooters pass them off simply as a competition tool and will never buy one because they’re more money than most would prefer to spend. This, ultimately, brings us to our first question …

Why are shot timers so much money?

Shot timers cost so much money because it’s generally a very niche item without a lot of competition to help drive the price down. However, when you compare the fact that a shot timer will generally last several years and using one will help you become more proficient as a shooter, the cost is well worth the money you may end up paying for one and is exponentially more important than many other pistol upgrades you may purchase, like an aftermarket trigger.

How does a shot timer help me get better as a shooter?

The truth is that many people don’t understand how a shot timer will help them get better as a shooter so they cannot justify the price to buy one. There are certain industry standards that have been set forth by some of the best firearms and combat instructors our country has to offer.

If the average shooter can draw from a holster and put a shot on a target in 1.7 seconds, but it only takes 1.5 seconds for an attack to start, you’re already .2 seconds behind the curve if you need to defend yourself. You won’t know that you’re behind the curve unless you can effectively time yourself drawing and shooting at a target.

Industry standards will help you set a benchmark, and a shot timer won’t lie to you and tell you that you’re good to go if you’re not. In fact, quite the opposite will happen. If it takes you 2 seconds to draw and put shots on a target chances are pretty good that you’ll lose that battle.

What is the industry standard? You should try to get from the draw to your first shot on target in under 1.5 seconds. If you can do that you’re above average, but you won’t know if you don’t have a shot timer.

What is the best shot timer?

I generally only recommend two different shot timers to someone in the market. The first one is the Pocket Pro II, which can be found on Amazon and the Rangetech BT Shot Timer, which, as far as I know, is the most affordable timer on the market. You can find them in their online store, as well as on Amazon

What is the best shot timer app?

I would generally warn away from using a shot timer app, unless you don’t have to pay anything for it and just need it in a pinch, like if you forgot your real timer at home.

Most of the shot timer apps are buggy, and your phone just isn’t designed with the right hardware to really do what you need it to do.

Is there a cheap shot timer?

Well, anything that’s going to be cheap is likely to just break because it’s made in a foreign country with terrible components. That being said, there is one that is less expensive than the others are. The Rangetech Shot Timer BT, which is the one I use by the way, has a much lower entrance price. They’re available both on Amazon, as well as on their website.

This shot timer is different than any of the others because it combines two different technologies. The first being that the machine connects to your phone via Bluetooth. The second is actually the phone which actually allows you to record your progress on things.

Full disclosure says that I work for the company on a contractor basis writing and editing articles. However, I only recommend products of theirs or anyone that I use and are worthwhile.

Yes, there is a Bluetooth shot timer available. It’s the one I spoke about above, and can be found at those above links.

Hopefully this helped to answer the question why are shot timers so much money, and helped you not only narrow your search to a more affordable option, but also help you better understand why having a shot timer is so important to help you get better at self-defense with your handgun.

Which shot timer do you use? Let us know in the comments below. Check out this article about drawing your gun when you’re already got a gun pointed at you and why it’s not necessarily the best idea.