Using The Best Ammo Possible, For Any Situation

Having a proper understanding of ammunition and which type of ammo you can and should probably be using in your self-defense gun is a good idea. The main reason why, is because having the wrong ammunition in your gun can be detrimental to your survival if you’re ever faced with a scenario when you need to use your gun for self-defense.

The rest of this article will hopefully help you decide what kind of ammunition you should be using in your self-defense gun, which may change at various times depending upon your situation.

What makes this ammo so great is the simple fact that when the bullet is fired and then hits something wet, like the insides of the human body, the bullets are designed to expand. While the expansion is great for slowing down an attacker because a bigger, jagged bullet does more internal damage, there is another, often not thought about benefit to using hollow points in your gun.

And that, is that because the bullet expands, it stands a less chance of passing all the way through. Because it won’t pass all the way through, it means that all of the bullet’s energy was dumped within the body maximizing the amount of damage done, AND, the bullet won’t leave that bad guy’s body and go somewhere else — like another human being.

Hollow point ammunition from the name brand companies like the following, are great options that I have used, and still use regularly:

Frangible ammunition is one of those misunderstood products that doesn’t get the recognition it deserves, and really excels in certain areas. A frangible bullet is one that breaks apart when it hits something harder than itself.

This makes frangible ammunition perfect for home-defense applications where there may be children or other lovable humans in the home.

The below video is a range demonstration of frangible ammo:

The reason why this ammo breaks apart, is because the projectiles aren’t solid metal. Whereas a hollow point or ball ammo will use a lead projectile that’s coated (or jacketed), the frangible ammunition is constructed of a compressed metal alloy, usually a mixture of tin and copper, with perhaps one or two others.

(I’ve got an in depth article here on our website discussing what frangible can be used for.)

It starts off as a powder, and when it hits something as hard as itself, or harder, it reduces back down into a powder, or at least breaks apart to some degree.

Good frangible ammo can be any of the following:

Ball ammunition should rarely be used for self-defense situations, unless you have to because it’s all your locality enables you to use (like New Jersey), or as a last resort because you’ve got nothing else.

Ball ammunition, also known as target ammo or FMJ (full metal jacket), is great for target practice and getting your skills where you need them so you can defend yourself with the proper ammunition when the time comes.

Any type of ball ammo can be good, but before you use steel cased ammo in your firearm, read your owner’s manual in case it says not to.

I honestly tend to buy my ball ammo in bulk because I shoot so very much and recommend you do the same. This is the bulk 9mm I use for my gun reviews.

When you see +P or +P+ on a box of ammunition, know that you’re getting an ammo rated at a higher pressure than standard ammunition is.

This is extremely important because not all guns are rated to shoot +P or higher ammo. The best way to know if your gun is rated for it is to check your owner’s manual beforehand. 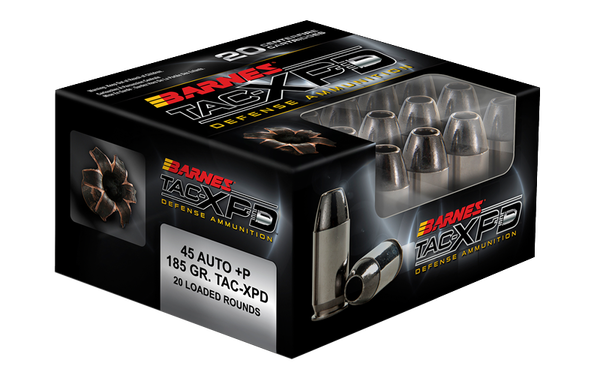 Good +P ammo can be any of the following:

This is one area where there is confusion. A lot of people think that because “self-defense” ammo and “target ammo” are called what they are, that they should only be used in those situations.

In all actuality, you should be shooting any self-defense ammunition in target practice from time to time to make sure that your gun cycles that ammo properly.

This is usually only prevalent in smaller guns, like those chambered in 380 ACP, or in some 45 caliber guns, but all ammo should be tested in any gun you may carry. This does a couple of things for you.

It is always recommended that you shoot your chosen self-defense ammo before putting it in your gun to make sure it cycles. Don’t skip this step or it can be disastrous.

It’s also always a good idea to shoot that ammunition in your gun before you ever need to use it for self-defense, so you know it’s actually going to work the way it’s supposed to.