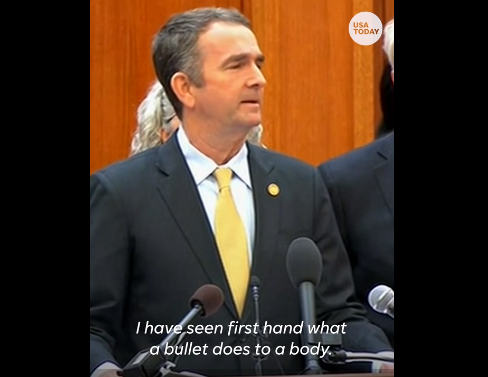 Virginia governor Ralph Northam ordered a special session to discuss gun control and how the state of Virginia can further limit the people’s right to keep and bear arms.

In a statement issued and captured here by USA Today, Northam said he’d look to institute universal background checks, place a ban on assault weapons and suppressors, invoke extreme-risk protective orders, only allow citizens to buy one gun per month, put child access prevention laws into place, and other gun control measures. You can watch a portion of the video here:

The nation is watching. We must give Virginians the action they deserve … I will be asking for votes and laws, not thoughts and prayers.

In other words, hang on Virginians because you’re headed to the whitewater rapids. It’s about to get rough.

Northam and other Virginia anti-gun legislators wasted no time to take advantage of this tragedy.

According to USA today, he rejected claims that it is “too soon” after the tragedy to address the issues. Delays, he said, would only result in more deaths.

As of right now, we don’t know when the special session on gun control measures is set to take place. However, we’ll follow this story as closely as time allows and try to keep you updated as things change.

Keep your powder dry, my friends.