Back in the 80s and 90s, it seemed like anything was possible. The G11 space gun was in full swing, the TEC 9 reportedly advertised as being resistant to fingerprints, and Knight’s Armament was making some cool stuff. The coolest of the cool was the KAC Masterkey.

The KAC Masterkey is a super small shotgun that attaches to the front of a rifle, typically an M4 or M16 platform. If you can picture, an M230 mounted to a rifle, replace the 203 with a shotgun. The Masterkey starts life as a Remington 870 Police Magnum and then shortened to 17 inches overall. The barrel is only 9.5 inches long, and it holds four rounds of 12 gauge.

The Masterkey mounts to the gun with a quick detach mounting adapter and can also be equipped to a Knight’s Stand Alone Buttstock module to form a more proper shotgun if needed.

If you can’t tell by the name the initial design was built around the idea of taking locks off doors. Knight’s Armament was quite clever with the title, and I love the fact they call it the Masterkey. It was designed to allow an operator to take a door off its hinges and then instantly transition to their rifle platform.

This eliminated the need for a separate breaching shotgun and gave the operator a quick, and on hand option.

Why I love It

It’s a shotgun mounted underneath a rifle. What’s not to like?

The Masterkey name is brilliant and very accurate.

The design is by Knight Armament, and as a slight Knight’s fanboy, I appreciate it when they do stuff like this.

When I was a kid, I wanted to be Billy from Predator.

Sure it looks clumsy and adds some weight to the front of the gun, but plenty of movies and television shows have taught me that looking cool is way more important than being useful. That’s not to crap on the Masterkey system though. It is a niche role, and it did eliminate the need to carry an entirely separate breaching shotgun.

The Masterkey allowed breachers to streamline their system when it came to knocking down doors. The intention was always for it to be a breaching tool, however, in a pinch, it would be a devastating self-defense weapon. 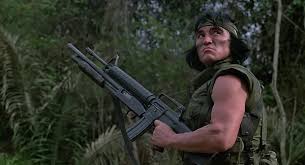 The downsides are pretty critical. First, you are strapping over 5 pounds to the front of your gun, making it very unbalanced. Second, it’s a pretty big reach to work the pump. With a shotgun mounted to your rifle, it’s not the most natural thing to grip. Unlike an M203 it’s not smooth and round so gripping it where firing the gun is likely very odd.

Also while it did offer a level of versatility to the rifle platform, the Masterkey was not designed and should not be used, or even suggested as a less lethal option. You are pointing a lethal option at the target to use a non-lethal option, and that is something that shouldn’t happen.

Finding any details on who used this weapon is tough. KAC typically makes these type of products for military and police sales. Supposedly the Masterkey was purchased for use by Delta Force, but did the Masterkey ever see operational use? Reportedly Paul Howe used one in the Battle for the Black Sea. There is also a mention of a pump-action shotgun attached to rifle in the book Blackhawk Down.

The Masterkey may not have been widely adopted, but the idea of an under barrel shotgun made its way into one of the best action movies of all time, Predator. However, Billy was carrying a Mossberg 500 mounted under an SP1. This configuration would surely make accentuating the tang safety difficult. The Masterkey has also made its way into tons of video games which know the rules about looking cool.

More importantly, the Masterkey design would later influence designs like the M26 MAS system. The M26 MASS is a purpose-built shotgun designed for being mounted underneath a barrel. It features a more straightforward straight bolt action and a box magazine.

There is also the even more straightforward and lighter single shot versions like the Hera HASTA and the X-12 that add shotgun firepower under a rifle’s barrel. These are much lighter systems, but if you need to shoot a lock twice, you better be fast on the reload.

The Masterkey’s legacy will live on. The idea of mounting a shotgun to a rifle is far from dead. However, the Masterkey is very 1980s, and the design shows it. Maybe I’m nostalgic for the 1980’s wild west gun design, but man do I want a KAC Masterkey on my mini 80 percent lower receiver AR.