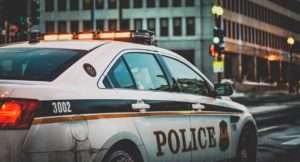 Houston, TX — A man and his wife were interrupted while dancing at a bar and restaurant by another man who attempted to grope the wife at about 2 o’clock in the morning last Friday. The groping prompted the woman to slap the man, and caused them to leave.

After they left, the man followed the couple out to where their car was parked and punched the husband, whose name is Alfredo Rodriguez, to the ground where he looked to be unconscious.

After the husband was down, the other man began to grab the wife again.

Their 21-year old son, who hasn’t been named as of this writing, was still inside the building and when he walked out he saw what was happening, pulled out his gun, and shot the attacker.

The 30-something year old man was rushed to the hospital where he died from his injuries.

The entire incident had witnesses and was caught on security cameras, helping aid the police in their early morning investigation.


It is important to note that the son accidentally shot his step mother in the leg during the altercation, but she’s expected to be okay. Neither the father nor the son were held after initial investigations, and it looks like no charges will be pressed.

And this, my friends, is why we carry guns on us. Train often, shoot straight, and carry daily.