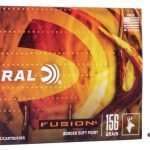 6.5x55mm Swedish Mauser: The 6.5X55mm Swedish Mauser was developed in 1893 by a joint Swedish/Norwegian commission and officially adopted by those countries as the military cartridge. Soon thereafter it became a popular sporting cartridge and was used for target shooting, including Olympic free rifle competition. It was virtually unknown in the United States until the […]