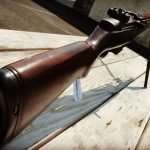 The .30″ caliber M1 Garand rifle was a gas-operated, semi-automatic, magazine-fed rifle that was developed by Springfield Armory firearms designer John Garand. The prototypes were refined during the 1920s and 1930s before being officially opted in 1932. And even then, it did not formally enter service until 1936 through an executive decision by then-Army Chief […]