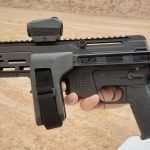 The 5.7X28 round isn’t exactly new. FN Herstal first released this cartridge several years back, with a couple dedicated guns, the P(S)90 and the FN Five-seveN. There was originally a lot of obscurity surrounding it and what it was capable of, which we touch on more in depth in the below-linked article. Suffice it to […]