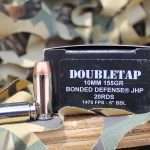 10mm History: 10mm Auto is the brainchild of Colonel Jeff Cooper, introduced in 1983 with the Bren Ten pistol. It’s parent case is the 30 Remington, and it was later adopted by the Federal Bureau of Investigation after meeting the required ballistics testing of the agency. There was a well-known FBI shootout that took place […]