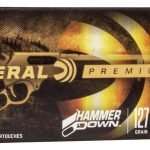 The 327 Federal Magnum is a relative newcomer to the revolver and lever action world. Federal Ammunition developed the cartridge off of the 32 H&R Magnum parent case in 2007 and began production on it in 2008. The 327 is a rimmed, straight walled cartridge that was originally meant to give concealed carriers an extra […]