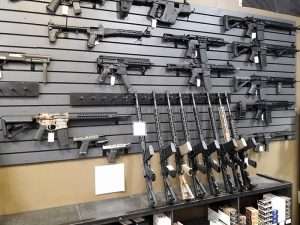 Nothing helps a hurting local economy quite like the destruction of perfectly functional things that could have otherwise been auctioned off to hard-working people willing to give actual money for said things.

Wow, what a mouthful. Stories like this really piss me off. Let’s check it out.

The anti-gun mayor of Flint, Michigan has said:

From Day 1, we put a priority on leading this city with a strong social conscience. Human life is always more valuable than dollars. Under this administration, we will never again line our pockets by selling guns. It is unconscionable that after seizing these illegal weapons that anyone would gamble by putting them back on the streets where they could again fall into the wrong hands.

Well, how decent of her? Of course, there are other things to think about that this person clearly has overlooked or, ya know, just doesn’t give a flying fornication about.

Like what? Well, when a city auctions off something like a gun, it does a couple of different things, very well. First, because that person buying the gun is, well, buying the gun — they have to go through this thing called a background check. I know, I know, it’s mind blowing that the media has lied to you for so very long about background checks, but they are required by law.

The thing about this, is that criminals don’t go through background checks because they know they’re going to fail. Instead, they steal the guns they get. So, the only way these guns that have been auctioned to good, background check passing folks get back onto the streets is if they’re stolen, again.

The second thing, is that it helps the purchaser, the citizen of the city, save money on something because they’re still going to be buying a gun. Auctions usually run a bit cheaper than purchasing an outright new gun.

Let me spell that out differently: They’re still going to buy a gun that still might get stolen. So you’re doing nothing helpful when you destroy guns.

The third thing, is that it helps bring in money for the local government, hopefully helping taxes stay just that much lower.

How much money does it bring in?

According to Fox News, the last year Flint, Michigan auctioned off guns, 1,200 of them, they brought in more than $200,000 to the city’s general fund.

For a city the size of Flint, that’s not an enormous amount of money, but it would certainly help pay a couple police officers overtime to help keep the idiots from committing crimes.

Oh, but hey that’s right, police are the bad guys … Silly me.

So instead of auctioning off the 250 firearms they currently have in their possession, they’ll be immediately disposed of (AKA destroyed, or maybe sold to drug runners?) by the local police department.

All we know with absolute certainty, is this: Anti-gun folks don’t have the highest level of common sense because here’s the deal, law abiding gun owners are going to be buying guns anyway, so it doesn’t really matter what the gun-hating mayor thinks about keeping guns off the streets.

All she’s doing is depriving her local economy.