Some firearms hold a special place in our hearts due to their service to the country, the M1 Garand, the M1911 service pistol, and the M16 are examples of those. Others are legendary due to their use by lawmen and outlaws in our history, the Colt Peacemaker and Thompson Submachinegun are notable names.

Then there are firearms that were made famous in TV and movies, Dirty Harry’s Smith and Wesson Model 29 and Sonny Crockett’s Bren Ten definitely make the list of famous TV and movie guns.

From 1983 to 1987, every week I would tune in to NBC to watch one of my favorite shows. The A-Team, a show about former Green Berets wrongfully accused of a crime they didn’t commit.

The show starred notable actors George Peppard and Mr. T, but for me the real star of the show was the rifle they used every week to put the bad guys out of business, the Ruger Mini 14.

In the late 1960s Bill Ruger and firearms designer James Sullivan designed the Mini 14 based on the M14 service rifle. It used a short stroke, gas piston and fed from a detachable box magazine.

The Mini 14 Standard was first introduced in 1973 with the Ranch Rifle model coming in 1982. Ruger also produced a select-fire version of the Mini 14 called the AC-556 for military and police use.

Bill Ruger was gambling that with the adoption of the M16 and production of 5.56 NATO ammunition for the Vietnam War, the round would have staying power.

It seems that he was right considering the 5.56 NATO round is currently the second longest serving service rifle round next to the 30-06 Springfield. It has also been stated that Bill Ruger believed that had his timing been different, the Mini 14 might have supplanted the Eugene Stoner designed M16 as the U.S. Military service rifle.

The Mini 14 was marketed in both blued and stainless-steel versions of the Standard and the Ranch Rifle.

The most popular and most collectable version was the Mini 14 GB with its side folding stock in both blued and stainless. The folding stocks sometimes show up on sites like Gunbroker and sell for almost as much as a new Mini 14.

In 1987 Ruger took another shot by releasing the Mini 30, a 7.62x39mm version that capitalized on the cheap surplus ammo that was flooding into the U.S. at the time. The Mini 30 soon became a favorite of hunters that lived in states with caliber restrictions and could not use .223 for hunting large game.

It was not all rainbows and lollipops for the Mini 14 in the early years however, the earliest production models were chambered in .223 Remington and were not suitable for use with 5.56 NATO ammunition due to differences in the chamber pressures between the two cartridges. This was quickly corrected in later rifles.

Also, one of the chief complaints about the Mini 14 was its lack of accuracy, which was mostly due to its pencil thin barrel. Initial grouping would be around 2 MOA, however when the barrel heated up, group size would grow to 4-5 MOA.

Once the thin barrel heated up it was more susceptible to barrel whip which is disastrous to accuracy, but companies like Accu-Strut made rail attachments to stiffen the barrels bringing groups back inside of 2 MOA.

In the early 2000’s Ruger did a re-design on the Mini 14/30 line to improve accuracy and address some of the other issues with the guns. The standard model was dropped all together and the Ranch Rifle became standard, with Tactical and Target versions being added to the line.

Ruger added a heavier tapered barrel in 2007 to further increase accuracy, this feature is found on the 580 series and later rifles.

The .300 Blackout was introduced in 2015 and is currently in the Ruger catalog. All models are available in blued and stainless.

I have been lucky enough to own a few examples of the Mini 14 over the years and can attest to the good and the bad of them. I currently have a 183 series Mini 14 Standard and a 580 series Mini 30 Tactical rifle.

My Mini 14 is one of the most reliable rifles I have ever owned, it runs on any ammunition that I have on hand. I have run 55gr Lake City surplus, 62gr green tip, 55gr Wolf Steel case, and some .223 handloads that a buddy of mine gave me.

I have owned the rifle for about 6 years now and other than punching the bore once in a while and occasionally some lubrication I have done nothing to it. It is as it came from the factory other than the flash hider that a previous owner added. 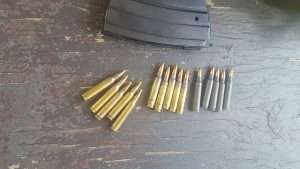 The trigger on the 183 series Mini 14 has a short take-up that is smooth with a crisp break right at 5 lbs. I would guess this is due to it being well worn in over the years as the newer ones I have shot are no where near this nice.

With open sights the rifle groups around 4-5 inches at 100 yards, which is exactly what I would expect. Not bad for a rifle that is nearly 40 years old with “lord knows” how many rounds through it. Its not a precision rifle but it is definitely “Minute of Bad Guy” and that is what it was meant to be.

My Mini 30 Tactical shoots minute of deer, and has been outfitted with a “GI” type rear sight from Tech Sights because I severely dislike the new factory rear sight.

They are adjustable for windage and elevation without having to loosen and tighten screws like the ones from the factory. It is every bit as reliable as my Mini 14 having been fed a steady diet of the cheapest Soviet ammo I can find. 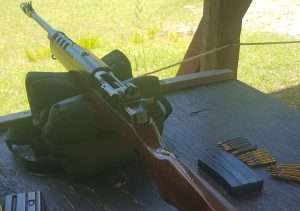 The trigger on my Mini 30 has a rough, gritty take-up and it breaks at 6 ½ lbs. The break is crisp and the reset is short, but there is a definite difference between it and the older Mini 14.

I would say there is definitely room for improvement on the trigger, but for a rifle that is meant as a scout/patrol rifle it is more than adequate and judging from my Mini 14 it will probably get better over time.

In previous years it was my rifle of choice for stalking deer in the thick woods here in Eastern North Carolina. It is short, light, accurate, and with Hornady Black ammo I have never worried about a deer getting away.

Either of these rifles would be outstanding choices for patrol/scout rifles. They are light, easy to maneuver, and accurate enough to engage man-sized targets out to 200 yards.

The Mini 14/30 also has the benefit of being equipped with wood stocks in the Ranch Rifle models, which would keep you off the skyline of your hoplophobic neighbors should you live in a state that is less than 2A friendly.

If I could only own 1 rifle, it would most certainly be a Mini 14. It truly is a rifle for all seasons.