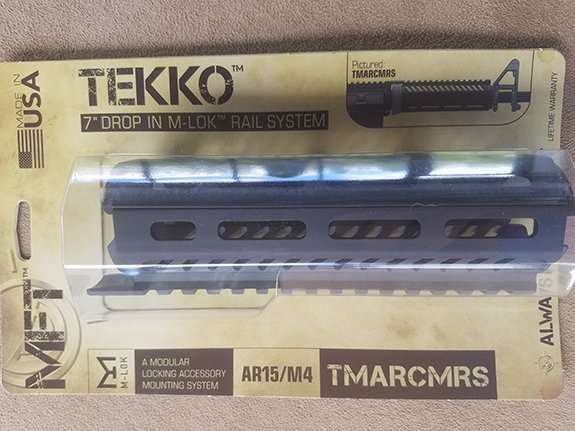 If you’re like some firearms enthusiasts, you don’t modify your firearms because you’re afraid to screw anything up. I fit somewhere into this category, but I’m also not afraid to build a gun from an 80% lower, as I have done in the past and will continue doing until I croak. Mission First Tactical has a product for those of us who’d enjoy a bit more modularity on our AR-15s, but don’t want to take any tools to our ARs, or make any permanent changes.

The MFT TEKKO TMARCMRS is a drop in M-LOK rail system meant to replace your fugly, useless stock guards, without having to use any tools. This particular one is the 7″ (carbine length) model, but there are other model sizes available, as well, if you’re in need of a longer rail system.

It is constructed of 6061 Aluminum and is hard coat anodized to not only increase its durability, but dress up the appearance as well. As an added benefit, M-LOK allows the operator to install just about anything they could ever want on their AR-15, as this system is one of the industry standards for attaching stuff to your AR-15.

Personally speaking, I’m waiting for someone to develop a cell-phone mount so I can watch Netflix and play Panda Pop while I’m on patrol. But, that’s not the point, because I can add an optic, a vertical foregrip, flashlight, laser, bi-pod or just about anything else I can ever imagine.

As stated a minute ago, this drop in AR-15 rail system doesn’t require any tools for installation. Simply remove your old, plastic handguards, and install the new ones, top one first. They are held in place by the Delta Ring and handguard cap.

This aluminum AR-15 rail system has an MSRP of $124.99, and I’d say that it is likely well worth the price you pay, because it adds the ability to install accessories, and is more aesthetically pleasing the the stock handguards are, in my humble, but usually accurate, opinion.

As an added benefit, I believe all of MFT’s products are made in the United States of America, so you know you’re getting high quality parts and accessories made by real people who get to say, “I’m an American.” To make it easy, they make many of the accessories you could ever want to attach to an AR-15 and have a great warranty put in place, so make sure you check them out.

Have you ever bought anything from MFT? What was your experience with their products? Let me know in the comments below.