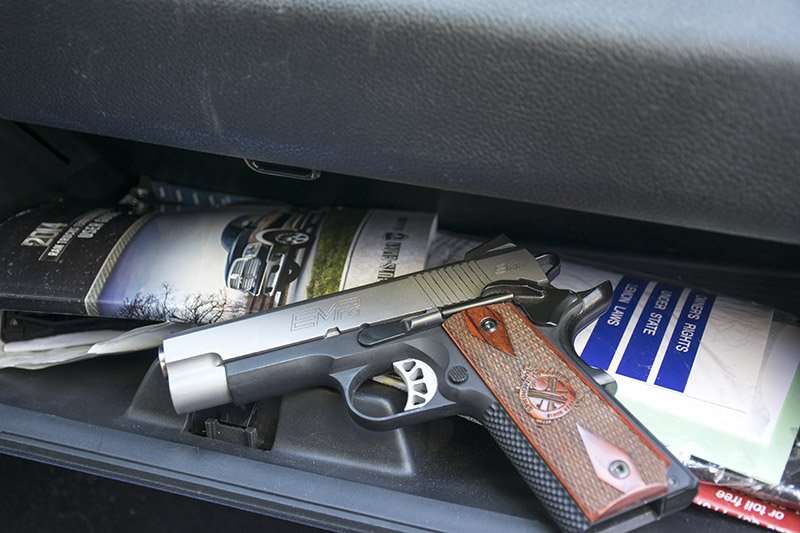 We see a common thought among some gun owners regarding the use of a truck gun.

These gun owners feel so strongly about having a gun in their car or truck for protection that they keep their gun in their vehicle at all times – to include when they’re sleeping in their home at night.

In theory I have no problem with this, and I believe strongly in America and the rights we have. I’m therefore not trying to say that you cannot have a truck or car gun that you store in your vehicle if that’s what you want to do.

What I will do, however, is tell you how stupid of an idea that is for most people, and explain why.

My goal with everything on this website as someone who is on the forefront of the gun industry, is education.

I just want you to know that some studies have shown that cars are eight times more likely to be broken into than houses are.

And, many times, the guns that’re stolen are taken from vehicles that aren’t even locked. This means that no glass needs to be broken to gain entrance to the vehicle and all your goods on the inside, including your truck gun.

If nothing needs to be broken, less noise is made. If less noise is made, the chances of your criminal getting caught in the act is lower. If they perceive a lower chance of getting busted they’re that much more likely to go through with the act of breaking in.

Just having a locked door where a thief is forced to make noise to gain entrance is a deterrent to many criminals. For a criminal to risk breaking in they have to believe that there is really something good inside. You know what that means?

Well, I’ll tell you what that means for me — no Glock, SIG, or NRA stickers on my car. I don’t want that criminal to know I may be a gun owner and go looking for my guns.

So, we know, or at least I’m suggesting to you, that leaving your gun out in your car–especially unlocked–is not a good idea.

What do I recommend then? Let’s go over the options for truck guns:

Leave the gun out there unlocked:

This is the same ol’ same ol’. We’ve already discussed this in great length and it’s not a good idea whoever you are. If you want to do it, again, this is the Land of the Free. You do what you want. Just know that your car is more likely to be broken into than your house is.

Leave the gun out there locked:

This goes one step beyond locking the car door. I very rarely leave my gun in my car, but if I do it’s because I’m going somewhere, like a government building, where I cannot be in possession of a firearm.

If this is the case, I lock the gun up and cable it to the metal seat frame. Other folks use a more expensive method of securing their firearms, but my method works fine for my quick and easy purposes.

I have yet to leave my gun in my car for any extended amount of time.

This is the one I use over at Bass Pro. It’s a low-cost for peace of mind.

Then there is something like this if you need something a bit more robust. Please note I’ve not used this one personally and can only recommend it because I trust the name Hornady.

The point is to lock your gun up so you don’t get it stolen.

Bring your gun in with you:

This is obviously the best choice if you’re able to do so. For example, if you’ve got a court appointment or something like that where you can’t bring your gun with you it has to stay in the car.

But, in terms of being at home, leaving your gun in your car isn’t the best idea especially if the criminal has reason to believe there is something valuable in your car.

Of course, this can be difficult depending on your chosen gun. If you live in an area where the houses are tight together and you’re transporting a long gun it can be harder to not stand out.

There are still options here, however.

Some people use guitar cases to transport guns discreetly, or, even better, is a braced pistol with side folding brace strapped down inside a briefcase or backpack if you feel like you need a bit more firepower.

However, for me, what I do is just use a loaded pistol strapped to my hip. My gun remains on my body at all times, unless I’m forced to leave it in the car. If that’s the case I then take extra measures to keep it out of the hands who would use it to harm others.

Source for the stats regarding gun thefts from cars being 8X higher than homes.

What do you think? Am I wrong? Let me know in the comments below.