Many folks thought that SHOT Show 2019 would be a flub of the worst kind. I mean, how could we top the SIG Sauer P365 release of 2018? How could any gun manufacturer pull something off that would be anywhere near as good?

Or so the naysayers said.

However, Mossberg heard that call, and answered it with something totally outside the norm for them: A subcompact pistol made for concealed carry. 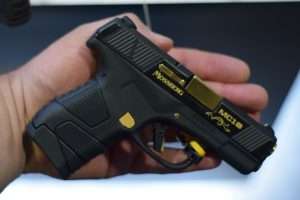 This isn’t the first time the Connecticut shotgun manufacturer made a concealed carry pistol, as they had a small pocket pistol called the Brownie way back in 1919.

They had a Mossberg Brownie on display at their booth in Vegas at SHOT Show 2019, and it was a cute little thing. I think the name “Brownie” fits it well. I could almost eat it up. 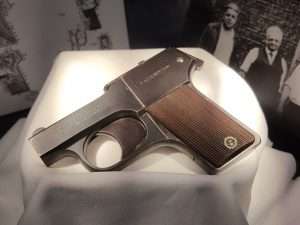 While the MC1sc isn’t going to compete directly with the P365, it doesn’t have to. It’ll fit in a totally different market, and I can say that it looks like it’ll fit in quite well. This new Mossberg pistol looks like it’ll compete with the S&W Shield, the G43, and other guns of that size.

In fact, it almost looks like they’re going right after those guns full steam ahead. And, I think it’s got a fighting chance.

Check out my MC1SC review, here from when they shipped me one to test.

While it may not be the sexiest little pistol on the market, after shooting it multiple times at the Media Day at the Range out at SHOT Show 2019, I can say that it ran great and I’m not the only one. Everyone I spoke to so far this week had nothing but good things to say about it.

Check out our video:

Hopefully you were able to see in the video just how capable it seems to be even with minimal recoil for such a small gun. Even better for me, I was able to hit the magazine release with ease, something that I usually struggle with, with my oddly shaped thumb.

With an MSRP starting at $425, going up from there if you want that Viridian laser model, with a street price likely well under the $400 price point, this is an excellent entry for Mossberg into the pistol market.

Other models includes one with a cross bolt safety for those of you who’d rather have that option, and a model without a safety.

Check out my review, here.