I debated on just how I was going to write this article. Technically speaking this is a news-worthy topic. The news is that a young man was arrested and being charged as a felon for making a social media post that hurt someone’s feelings. He’s currently looking at 20 years in jail.

This kid was a college student studying law enforcement and is the son of a retired Marine Colonel. He really had no plans to do anything to anyone, but as people usually do, he said something stupid, offended someone, and was essentially red flagged.

Here is the offensive social media post showing off his new AR-15: 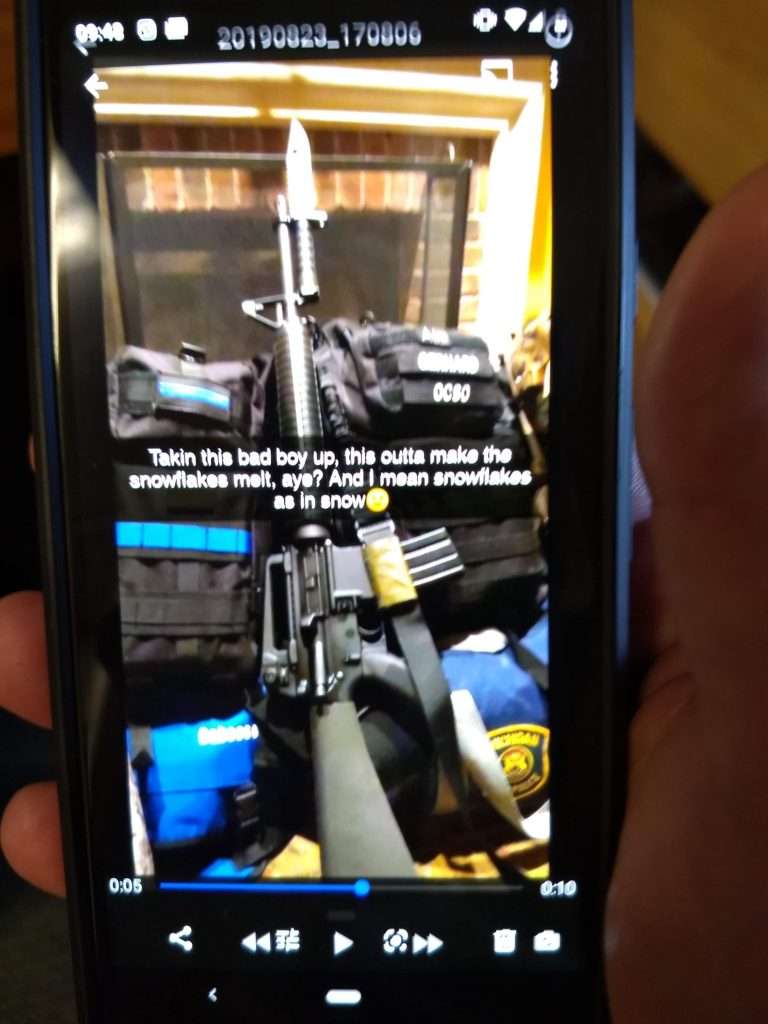 If you have a hard time reading it because it is a little blurry, it says this: “Takin this bad boy up, this outta make the snowflakes melt, aye? And I mean snowflakes as in snow.”

Why we shouldn’t say certain things on social media:

We really need to be careful what we say, in any context. No, this isn’t me trying to put a limit on your First Amendment, just that we need to use a bit of common sense when we’re on social media. Things can and will come back to haunt us.

There are tons of reasons why we should seriously watch what we’re saying on social media platforms. Not only are they apparently red flagging individuals just because of something they’ve said, like in the above photo, they can use your own information and words against you.

Let’s dissect this for just a moment, shall we?

Let’s say that you’re a member of a private Facebook group dedicated to the owning of firearms. Heck, I’m a member of several so I’m not saying there’s anything wrong with it. But, let’s say that for a long while you’ve been commenting on defensive gun use stories using language similar to the following after a bad guy survived following a break-in:

They should have ended his ass so he couldn’t do this to anyone else. If that was my house, they’d have called the coroner.

Or, let’s say that the bad guy did die due to his idiocy and you say something like:

Good, the world needs one less criminal wandering around and I would have killed his ass too!

Now, let’s put out a different scenario. This scenario entails a bad guy breaking into your house late one night. Now let’s say that you feel threatened and that the only way to stop the threat of the attack is to pull out your gun in defense of life and shoot him.

Only, you had to shoot multiple times because the shots you were landing kept missing vitals, or, because he was so hopped up on adrenaline that he wasn’t stopping his advance. What if you have to shoot him 6, 7, or 8 times?

Is that an excessive use of force?

After all, on your social media profiles you kept saying how much you’d want to kill someone.

Now, because you like talking smack on the internet it comes back to bite you in the booty and your loose lips just created a tremendous problem for your freedom. Your lawyer now has to prove that you didn’t kill someone pre-meditatively, you know, AKA murder.

This is extremely important stuff here. Anything you say can be used against you in court, to include your social media stuff. And, if you think that because you’ve set your profile to private that it won’t hurt you you’ve got another thing coming.

There are already documented cases of Facebook and others getting court orders to release information. It can and has happened, and it could happen to you unless you’re very careful from here on out.

Let me spell it out: Stop saying stupid crap on social media. No, this isn’t me trampling on your First Amendment rights. In all honesty, say what you want. Just don’t say I didn’t warn you, because I did. Stop saying you’d kill someone on the internet. It’ll eventually come back to haunt you.

And, as if it couldn’t get any worse, we now have to worry about hurting snowflake feelings, getting red flagged for no reason, and screwing up our entire lives because we posted a harmless picture with a few misspelled words underneath.

This is the world in which we live and gun owners are constantly under new attacks.

It’ll get worse before it gets any better, so again I say … if you value your freedom, watch what you say on the internet. Once something is up there it’s there for ever and ever. You can take it down, but it’s never fully gone.