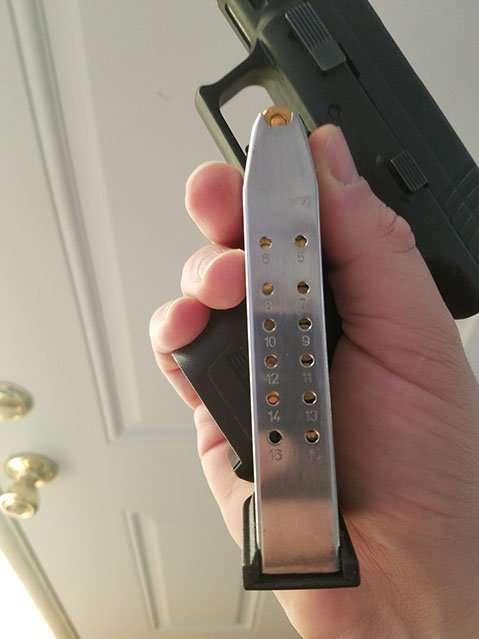 As with all things in our industry, you’ll find varying degrees of comments regarding the usage of spare magazines, also known as reloads.

Some folks have decided to not carry a spare mag on them citing several different reasons as to why, while other concealed carriers do state that they carry at least one reload.

And of course, this also applies to revolver reloads as well, because I’m also a wheel gun guy myself, and carry a revolver at least a few times per month.

So maybe you’re asking the question …

How many spare magazines should I carry?

It’s a good idea to consider carrying at least one spare reload for your chosen carry gun. There are a few reasons why this is, to include a malfunction in your loaded magazine, or maybe you ran out of ammo and have found yourself in a shootout with numerous different attackers in which case you’re required to reload.

Or one of the other reasons why you may need more ammo than what you’ve currently got in your gun.

Let’s dissect this even further.

Why it’s a good practice to carry a reload or two:

There are actually quite a few different reasons why carrying more than just the rounds you have in your gun is a good idea.

And at the end of the day, it’s better to have more ammo than you’ll need, than not enough ammo.

A spare magazine fixes some malfunctions

One of the most popular malfunctions occurs when the magazine doesn’t function properly. The chance that your magazine may not work properly during a fire fight also just happens to be something many shooters don’t take into account.

To help combat this, pun intended, the best thing to do is have a spare that you can deploy just in case you get one of these malfunctions where your magazine hangs your gun up from functioning properly.

Having a gun jam during a firefight is almost about as bad as it can get. The only thing that’s probably worse is not having a way to fix it quickly to get back into the fight.

Of course, just to play devil’s advocate here, most malfunctions can be cleared without having to strip the magazine with a simple tap-rack.

Then again, something like a double feed may really screw you up and if and you have to strip your mag out anyway putting a fresh one in may help you out some.

It should go without saying that in a revolver you generally don’t have to worry about this type of malfunction, so this is geared more toward the semi-automatic guns.

Another reason why you may need a spare reload for your concealed carry gun is because you might run out of ammunition while you still need to defend yourself.

These chances are rare, but then again so is the chance that you may ever need to protect yourself. It could still happen which is why we do carry guns to begin with.

Many of us have the frame of mind that says, it’s better to have it and not need it than to need it and not have it.

Plus, I don’t think I’ve ever heard anyone who has been in a gun fight say they wish they had less ammo. I believe the opposite could happen though if someone runs out of ammunition.

In fact, I’ve spoken to police officers who wished they had more ammo on them during a firefight.

Does that mean I’m looking to get into a massive firefight with multiple individuals? Not exactly, no. But it could happen and I understand that chance.

And at the end of the day, your primary goal is to survive the fight and get to safety as quickly as you can.

Even one attacker may require a spare reload

This is largely dependent on a few different aspects, one being the size of your magazines. The next aspect is your ability as a shooter. When writing these articles I’m looking at this from the perspective of an average shooter meaning that you can hit center mass but may not have a lot of experience drawing and shooting or shooting under stress, which totally changes things.

The final aspect, which is not only the icing on the cake — but the only part you cannot control — is the condition of your attacker.

Even if you hit your attacker all 7 times, someone high on a narcotic like that can keep coming until their central nervous system catches up to the fact that they’ve been injured.

If you shot that person 7 times, ran out of ammo, and just happened to miss all of the vitals, that meth-head is not going to slow down until he bleeds out which can take several minutes.

Again, not likely to happen. But, you’re not likely to be attacked to the point that you need to defend yourself anyway — but it could still happen which is why we carry a gun to begin with and evidenced by the fact that we write DGU news stories, here.

If you need more mags for your gun, I recommend Gun Mag Warehouse.

At the end of the day, it all comes down to the confidence you have both in your gear and your ability as a defensive shooter. A lot of people make the argument that says, well, I’m already carrying a gun what’s one more thing?

While others make the argument that says, if I need more ammo than I’ve got I’m already placed in an unwinnable situation.

Ultimately it’s your choice — but again, I’ve never heard someone say they wish they had less ammo during a fight.