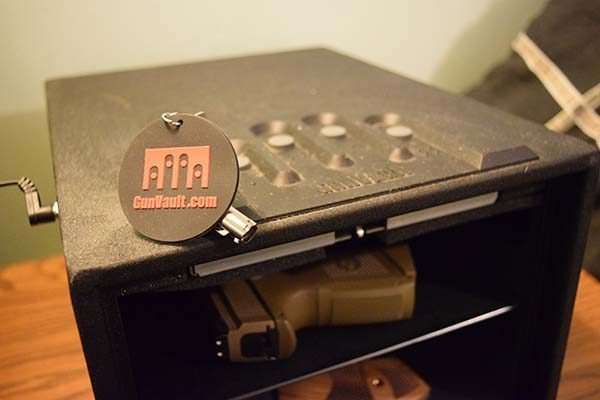 We’ll get to the handgun safe review in a moment, but I wanted to talk about safety for a second …

One of the most important aspects of anything regarding guns is safety. Gun safety goes beyond safe handling, trigger control, proper muzzle awareness, knowing your target, and treating all guns as if they are loaded. All aspects of the gun must be treated in a safe manner, to include storage. I hope I don’t have to explain the importance of locking up your guns when you’re not around, but I know some of you are beginners, so let’s tackle this topic before moving on to the actual gun safe review.

I want to say right now that I’m writing this from the point of view of a dad who has three little kids at home all under the age of 10. I’m writing this as a dad who teaches his children about guns because I feel as though it is one of the most important things I could ever teach them.

I know that whatever they don’t learn from me here, at home, they’ll learn somewhere else. Therefore, I want to teach them as much as I can before they decide that what I have to say isn’t important. Having said all of that, my youngest is 5. While he gets that guns aren’t toys and that he should never touch one, he is still only a five year old boy who touches–literally–everything he can.

This means that I need to take responsibility as an adult and father to protect my children from themselves.

I have taken my nine year old girl shooting. She had a blast, and I made her commit the safety rules to memory, as well as the parts of the gun itself. I have the firm belief that someone cannot fully understand how to be safe with a firearm until they know what the various parts are. But, that’s besides the point.

My guns are kept in a manner that my children cannot get to them. I won’t divulge much because that part of my life is private, but I hope you understand the point.

There are some folks out there who don’t lock their guns up, and while that is their prerogative, it’s not for me. Let’s say, for a moment, that I didn’t have young children at home. I’m not a hermit and have to leave my house a few times per week. If I left my guns out in the open, any old idiot criminal could have access to my firearms, and that’s got bad ju-ju written all over it.

So, I intend to lock my firearms up when not in use, and one of my methods of locking them up has been this Gun Vault 2000 handgun safe for the past six months. It has worked well for me, and I even brought it on vacation.

I have practiced with this safe so much over the past few months that it takes me just a couple seconds to get into it, and I feel confident that my children cannot. The rest of what follows is a review of that Gun Vault 2000 safe, that I ordered from 1800 Guns And Ammo. They’ve got really good prices on many different things, and I always check their prices before I make a buying decision. 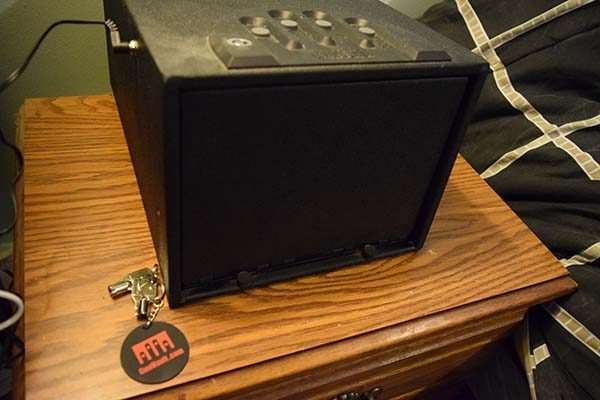 I’ve had this safe for many months, and even brought it on vacation with me to lock my gun up while away from home. It is a little bit bigger than your average “travel” safe, but it still worked well when I drove through communist Maryland under the protection of 926A, and again while we stayed in our cabin in the mountain region of North Carolina.

This particular handgun safe has a thin plastic shelf on the inside that is designed to hold a gun, some ammo, or whatever else you feel like stashing inside. As you can see from the pictures I snapped, I had two guns in there, and I do believe that depending on how they are placed, I could have fit a total of four to six guns, depending on their size.

There are other safes made by this company that are smaller in size, more portable, and offer the same options. Make sure you check them out.

This handgun safe is not meant to be impenetrable. None of the best handgun safes are. What it is meant to be, is a deterrent. A criminal who breaks into my house may be inclined to try and steal it, or even get it open. But if he can’t get it open, in the name of time and not getting arrested, he is more likely to move on. And, unless he has a pry bar on him to pull it off the table it’s bolted to, there won’t be any taking it. Then again, I guess he can take the entire table, but that has its own risks.

It’s also meant to keep kids out which is a bigger deal for me because I work from home and spend most of my time here, writing about guns (don’t forget I’m the editor for concealedcarry.com). Therefore, my kids are always around, especially since we home school them. This gives the added peace of mind that comes with locking my guns up away from them.

The Gunvault 2000 pistol safe is built well, and seems to be solid as far as construction goes. It is not impenetrable, though, and that needs to be kept in mind. Again, this is a deterrent to theft, not an end-all to it. Having said that though, I’ve had it in my possession since May or June of this year, so about seven months so far, and can say that I’m pretty happy with how it has held up.

The door is spring-loaded, so it flies open with fury once the security code is entered (or the key is used). What’s nice about it, is that it doesn’t slam because there are two little rubber bushings acting as a door stop to absorb the impact and noise.

It isn’t heavy, but it can be bolted down to a hard surface for some extra security. A template is included to make it easier for you to bolt it down, if this is a desire for you. Just keep in mind that once you do, it isn’t portable anymore.

I do believe this is one of the best handgun safes out there, for the money.

What’s nice is that, since it’s electronically operated, it has a battery backup. That way, if you lose power you’ll still be able to get into the safe to defend yourself if needed. If your battery died, it comes with a few barrel keys that override the system to help you get in.

You also get the necessary paperwork to help you learn how to use the safe, to program it, and make sure you know how to use it, should it not be so straight forward. If I can figure it out, trust me when I say that you will be able to, as well.

How to program your GunVault handgun safe:

So, it’s not to hard to do. Here are the basic steps–

That’s it. Once it’s programmed, it is necessary to practice opening it and committing the code to memory. Make sure you practice it enough times that you develop muscle memory so you’ll still be able to pop it open in the middle of the night, if needed.

There are some other features, as well, that you should be aware of. The first one, is that you can turn the sound off on the keypad, but I tend to like the audible beep so I can hear that the button was pushed down right. Another one is a tamper detection feature, that will show you if someone entered the wrong code. Finally, there is a sleep mode that prevents someone to break-in after 24 unsuccessful attempts of entering.

Getting past the sleep mode is easy with the use of one of the included keys, so don’t lose them. Speaking of the key, it is important to note that the keys are numbered and so is the safe. Make sure you write these numbers down should you ever lose the keys or need technical assistance. You should be able to order replacement keys if lost, with this info.

Nothing is perfect, and this GunVault Handgun Safe isn’t, either. One of the main issues that I have is the fact that the safe isn’t as quick as I am. What I mean, is that if I push the code in as fast as I can, it only registers one or two of the buttons, instead of the entire code I’ve chosen.

So, it takes a bit of practice to make sure you’re entering the entire code at a speed that the safe can recognize. I’ve gotten it down, but as with any of your gun training, this is a part of it now and needs to be practiced too.

I feel as though having the ability to lock guns up when not in use is important. This is amplified when children are present, because even when kids are taught, some of them still allow their curiosity to get the best of them. I know that I’m doing all I can to keep my kids and their friends safe when they come over to play by locking my guns up.

The last thing I need is for my guns to fall into the wrong hands, so I do my part. Do you do yours? Which gun safe do you use at your bedside? Let me know in the comments below. Then, make sure you give this list of the top 20 9mm handguns a read. Did yours make the list?