Today was a good day. I got to knock off early and spend some quality time with my wife and kids. I took them to one of my favorite hangouts in town, the local indoor gun range. The girls enjoyed finally getting the chance to put in some range time with the last presents they opened up on Christmas morning (Old Saint Nick is apparently a 2A supporter) and I enjoyed coaching my daughters in the fundamentals of marksmanship.

Looking back to my pre-teen years growing up in SoCal, my mother used to take me out to the local range and rent a 1911 and let me burn up a box of ammo about once a month. Back then I had my heart set on an AMT Hardballer. We used to go to the local gun store and I would always be drawn to the AMT with its brushed stainless finish, adjustable sights, extended slide release, and extended thumb safety. It was my dream gun.

The promise of owning it someday kept me motivated to stay on my daily task of mucking out horse stalls for $0.25 per stall. My step-dad would bring home the sales ad from Big 5 Sporting Goods displaying surplus import AK-47s on sale for ridiculously low prices and I would reply that I was saving up for the AMT.

I remember one sales advertisement had the then-new Smith & Wesson 645 for sale and I had already saved up enough to purchase one. But no, I was holding out for a Hardballer (one of my less intelligent moves looking back).

Eventually I fell out of love with the AMT and settled on a good all-around gun.

A used Marlin 1894 in .44 Remington Magnum beckoned to me from the case behind the counter and since I had already saved up enough money it went home with us that day. From then on when we went to the gun range I was shooting my own gun that I had saved up the money for.

At the time 20 rounds of .44 Mag went for roughly the same as a 50 round box of .45 ACP (which was probably a good thing or my shoulder would still resemble a purple squash). A couple of years later we moved to Washington and I spent a lot of time out in the woods with my horse, my dog, and my Marlin. I took it on my first deer hunt and that same day used it to scare away what would have been my first deer. But that is a story for another day …

I used to think my mother was just going along with my love of guns to entertain me, keep me out of trouble and to keep me focused on my chores and schoolwork (keeping up on chores and schoolwork were always a pre-requisite for range time). Now that I have children of my own it has become increasingly important to try and pass down some traditions to my girls.

I retired from the Marine Corps when my oldest was almost 11 years old because I had already missed several birthdays and holidays and I wanted to be there to help guide her and her sister through what is arguably some of the hardest years of life, the teens. Finding things to bond with my pre-teen and teenaged daughters has been a challenge, especially since I don’t know who Pewtie Pie is, nor do I have any interest in catching all (or any) Pokémon’s.

I finally decided that maybe I could introduce my girls to one of my oldest loves … Shooting.

The first time my wife and I took the girls to the gun range they took turns shooting my old Ruger MkII Target model. They really seemed to enjoy it, even though I wouldn’t let them even handle the pistol until they had memorized the four safety rules as I learned them over many years on the U.S. Marine Corps rifle ranges. Even the ride to the range sounded like firing day one of boot camp, with me sounding off each safety rule and my girls repeating them like second phase recruits. That year for her birthday my oldest got a Ruger 10-22 rifle. The next Christmas my youngest got her own 10-22.

We have made several family range days since then and those times are about the only times that they put their phones up without me having to tell them. A few times I have introduced them to some of my larger more powerful firearms and they take to it like a duck to water.

The last time out my oldest tried out my old Bushmaster carbine (the one my lovely wife claimed for herself) and within a couple of shots she was consistently putting steel on target. That was also the trip that she tried my .357 Magnum Rossi R92 Saddle ring carbine. I had brought a couple of boxes of .38 Special ammo along and asked her if she would like to try that rifle out. She said sure and after a unloading the rifle on a couple of Pepsi cans at 30 yards, she asked if she could shoot it some more.

I replied “that’s what we brought it for sweetie”. About 40 minutes later after coaching my youngest with my (now my wife’s) Bushmaster, I decided to take a few shots with an old Taurus .38 revolver I had brought along. When I went looking for the .38 ammo it was gone, both boxes cleaned up.

When I looked at the firing line my oldest was making Pepsi cans dance with the last of the .38 ammo. I asked her if she shot up all of it and got a sheepish “yes” and “I’m sorry Dad” in response. I told her that it was ok and asked if she liked my rifle. She answered “You mean my rifle?” I can’t say no to my princess so I guess I will get myself another Rossi … lol.

Last Christmas the girls got matching Heritage .22 revolvers and I must say that they were the envy of all of their male cousins, fielding questions like “Are they real?” Today they got to take them to the range for the first time and after getting used to firing with the most basic of sights, did pretty well. It was a good day to be a father. Looking back at my youth, whether she intended to or not, range time proved to be some good bonding for me and my mother. I am happy to say that the tradition has been continued for at least one more generation. 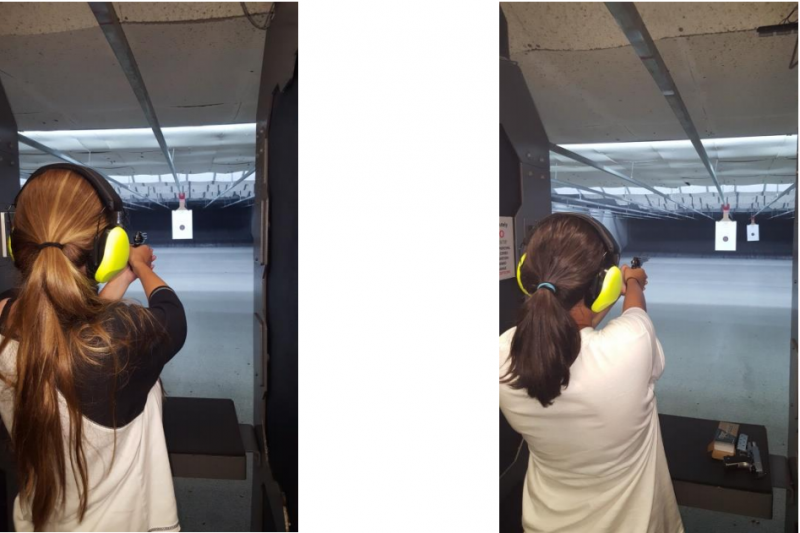 It allows us to keep in touch with our history, whether it is the citizen soldiers who took on the strongest military in the world and sent them packing or the pioneers who blazed a trail to the Pacific Ocean. While not all of our history and traditions make for cozy fireside stories, the American traditions of self-reliance, rugged individualism and being able to put steel on target, and, if necessary, food on the table is one that I am proud to be continuing.

Yup, today was a good day.

All this talk about the gun range makes me wonder if you’re up to speed on your gun range etiquette. Check it out.