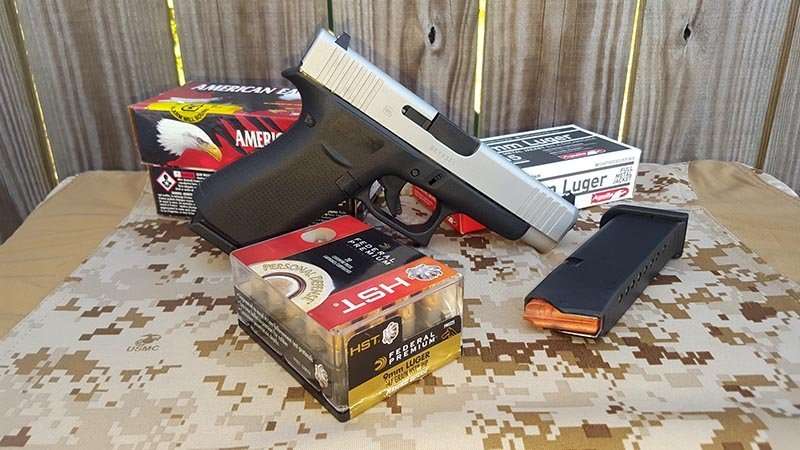 At Shot Show 2019 Glock showcased their newest pistols, the Silver Slimline G48 and G43X and I never even got in line to shoot them. I honestly passed Glock by for 2 reasons. First, I was completely unimpressed by last year’s reveal of the G19X at Shot Show 2018. For all the talk, it was basically a G19 slide on a G17 frame in Coyote tan color.

Sorry guys, but nothing really earth-shattering here. Second, I am really not enamored by anything made by Glock. I know, I know, Glocks are the most safe, reliable, accurate, greatest, best pistol ever made and I am a knuckle dragging Neanderthal because I don’t like them.

I know what you’re thinking, “You must be one of those ‘Cult of the 1911’ guys.” Sorry, I just don’t like Glocks and my opinion has been formed by experience with them. 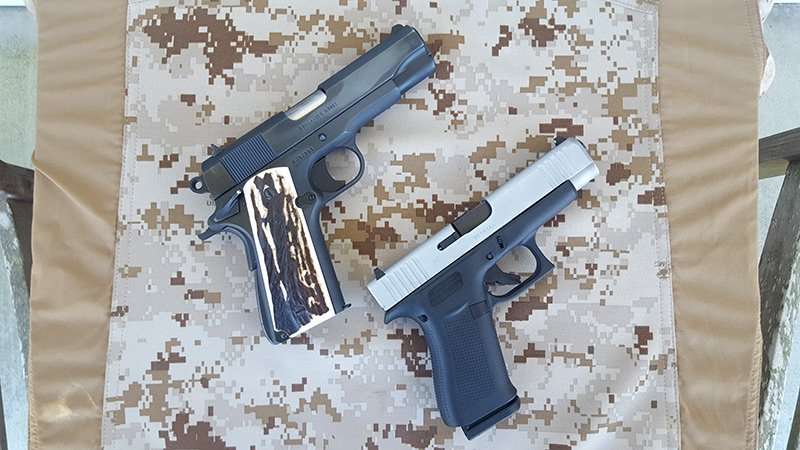 I am a firearms enthusiast and while I have a deep-rooted affinity for the M1911 pistol I also recognize that it is not the only handgun in the world. I have and currently do own several different pistols and revolvers from many different manufacturers.

Since my trade for almost the last 3 decades has been as a diesel mechanic, I believe in using the right tool for the job. Some pistols are better suited for some jobs than others and even though I have the utmost confidence in what I believe to be John Moses Browning’s seminal work, I also have other handguns that make their way into my every day carry rotation.

I have carried 2nd/3rd Generation Smith and Wesson pistols, Walther PPKs, Ruger and Charter Arms revolvers, and yes even Glocks.

I know that it is sacrilegious for fans of the 1911 to even speak the name of Gaston Glock (and vice versa as well) but even the most devoted JMB follower has to concede that Glock has a well-earned reputation for making ultra-reliable, accurate pistols. 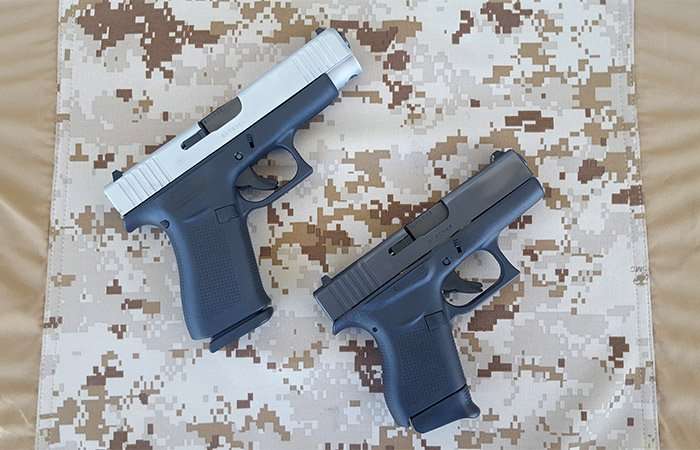 The first Glock I ever purchased was a G30 SF model and I carried it on and off for a few years before I ended up selling it. Since then I have owned a 3rd Gen G23, 4th Gen G21, a G42, and my wife currently has a G43.

All of them shot well, were very accurate, and uber reliable in their stock out of the box configuration.

And while all of them were outstanding pistols in their own right, they all have one thing in common (with the exception of my wife’s G43), they are all gone. 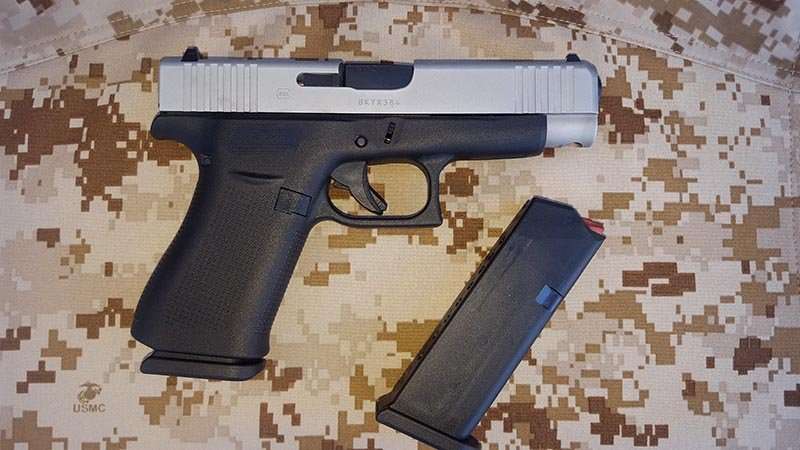 For me, a pistol should feel like a natural extension of my body and the Glocks never did. My G30 was ridiculously accurate and reliable and I wanted to love it, but it never felt quite right in my hand and I was never quite comfortable shooting it.

When the Gen 4 came out I thought that the interchangeable backstraps would solve the problem, that I would finally be able to fit the gun to my hand. I was wrong, so from then on, I swore off Glocks.

Last week I was at my local indoor range for a bit of .45 caliber therapy and as I often do, I did some window shopping after I was done with my practice session. As I was looking at the guns in the case a trio of pistols with a 2-tone finish caught my eye.

For some reason I had gravitated to the G48 that I ignored at Shot Show. The clerk was kind enough to pass one over to me for further inspection and after double checking the weapon was clear, I closed the slide and sighted in on a spot on the far wall.

The pistol in my hand felt right.

I handed it back, thanked the clerk and went on about my day. That evening I started thinking again about the G48 and how it felt. I pushed it from my thoughts and called it a night.

The next morning, I was back shortly after the range opened and after some paperwork and a swipe of my card, I walked out with a brand-new Glock 48. What follows is my Glock 48 review.

Once I got it home I went through my usual routine of disassembly, inspection, and cleaning. In my opinion, this is not as important for Glocks as it is for other manufacturers since I have never come across a new Glock that came from the factory gunked up with a corrosion inhibitor.

In my experience there really is no cleaning required before firing, but I do an inspection and cleaning on every firearm I acquire whether they are new or used. 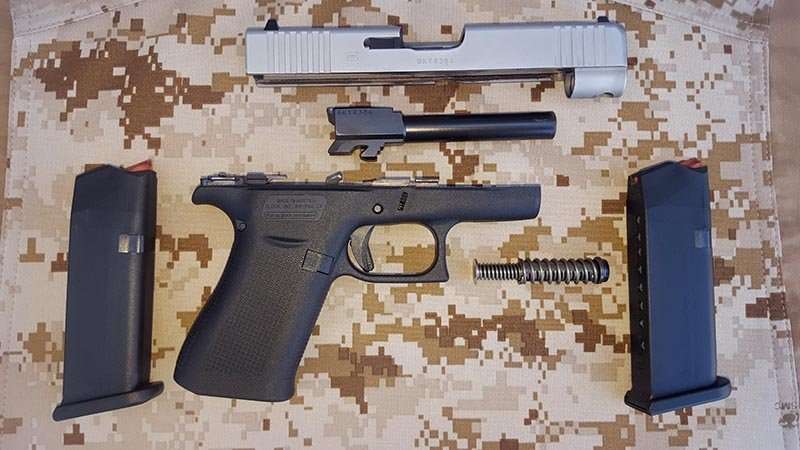 The Silver Slimline Glocks have an attractive 2-tone finish with a black polymer frame and silver nPVD coated slide, that also has front and rear cocking serrations.

It comes with standard Glock accessories, 2 ten round magazines, magazine loading tool, cleaning rod, nylon bore brush, and safety lock. Basically, what I have come to expect from Glock, everything you need and nothing you don’t. 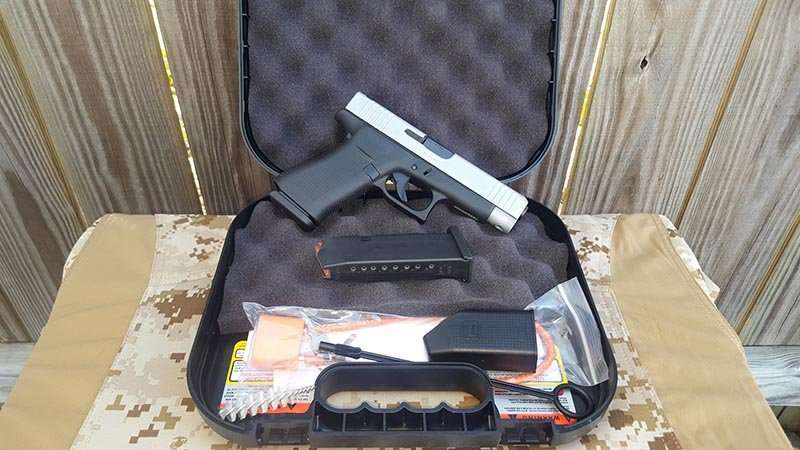 The changes that Glock has applied to the Gen 5 and the Slimline pistols are so subtle that I didn’t really notice them until after I had fired 200 rounds through the pistol.

Second, and I am embarrassed to state I didn’t notice it upon my initial inspection, the finger grooves that Glock introduced on their Gen 3 pistols and carried over to the Gen 4 were gone … and that made all the difference. 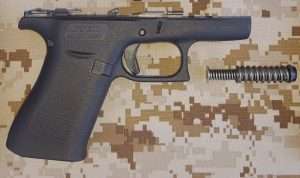 As stated before, my main complaint with Glock was the feel, they never felt right in my hand.

All the Glocks I had owned up to this point had the cursed finger grooves and were double stack pistols (with the G42 being the obvious exception), and being a 1911 guy, I just assumed that it was because I am so accustomed to the feel of the 1911.

The slim profile and lack of finger grooves make a world of difference in the way the G48 feels in the hand, almost like it was made for me.

The next day I headed back to Sportsman’s Lodge, my local indoor range to test fire the G48 to see if it would disappoint me like my previous Glocks had.

I took 200 rounds to the range with me, a mix of Federal American Eagle 124gr FMJ, Aguila 115gr FMJ, Federal 115gr JHP, and Magtech 115gr JHP. I wanted to see how it would perform with different ammunition. Because Glock has a reputation for being highly reliable, I was more concerned with how it would group different ammo than whether it would feed reliably.

The reason I parted ways with my earlier Glocks was due to the way they felt when firing, they never felt comfortable to me. I would constantly have to adjust the pistol in my hand every few shots and after about 50 rounds of shooting the middle finger on my shooting hand would feel sore.

This was due to a ridge left over from the frame molding process that would rub the side of my finger where it made contact with the bottom of the trigger guard. To me it seemed that a company that touted themselves as “Glock Perfection” could do a better job cleaning up the molding flash. 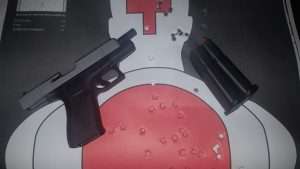 So how did the G48 perform? Well I must say that I was impressed. Not necessarily by the fact that it ate all 200 rounds that I took to the range without a single malfunction, I mean let’s face it, it’s a Glock.

No, I was impressed by the fact that it was comfortable to shoot, with no adjusting necessary and more importantly, no rubbing on my finger. It was also absolutely accurate and reliable, just what you would expect from Glock.

I fired from 10 to 25 yards and the G48 basically fires point of aim, point of impact through all ranges as long as the shooter does their job.

Proper sight alignment, sight picture, and trigger control are paramount to accuracy and if the operator applies them properly then the G48 is definitely a capable weapon. I fired the G48 from the 2-handed, 1 hand strong hand, and 1 hand weak hand holds. I fired sustained slow fire at 25 yards, rapid pairs at 15 yards, and Failure drills at 10 yards.

After 200 rounds I came to the realization that I need to shoot more. 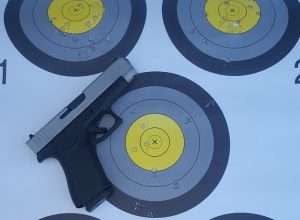 The Glock grouped well at all ranges, and the only rounds that I dropped (and there were a few), I called due to poor trigger control on my part. Grouping at 15 yards showed very little difference between the different kinds of ammunition but that could also be due to the jerk behind the trigger.

Sustained slow fire at 25 yards produced some of the best shooting I have ever done from that range with all but 3 rounds finding their way to vital areas of the target. 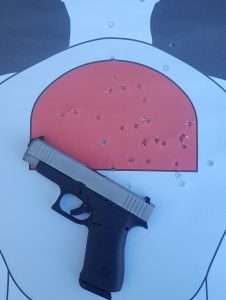 Shooting defensive drills at 10 and 15 yards respectively, I found the G48 to be very controllable with very little muzzle flip.

It was easy to quickly get back on target for follow-up shots. Felt recoil was minor for a pistol of the G48s size and weight, a testament to the engineers at Glock.

For a guy who never had much use for Glocks, I must say that I am impressed with what Glock has done with the G48. When I purchased it, I figured that I would shoot it, write the review, and then sell it.

But the G48 has changed my mind. It is an attractive, accurate, and reliable pistol that has earned its way into my carry rotation and may have very well displaced my Colt Commander as my go-to for everyday carry.

Its light weight and slim profile make it perfect for concealed carry, which I am guessing was Glock’s intent. I have often stated that I would never own another Glock, to which they apparently said “Challenge Accepted.” Well not only did they accept the challenge, but they hit it out of the park.

Now if I could only get them to come out with a compact .45 …

Brownells currently has them in stock for a good price.

The above is written by Joe Roberts.