You made the decision to carry a sidearm on your person or in your vehicle daily. In addition, you selected a handgun and obtained some baseline training and perhaps shot a qualifying score in a concealed carry class. Your accuracy is good while standing squared up in front of a non-moving target while under little or no stress. The problem is, very few if any confrontations are static. I can assure you they’re all stressful.

So while you continue to add layer upon layer to your training resume, consider adding positional shooting to the mix. It will add to your overall shooting ability and boost your confidence. Because many shooters do not often practice from alternate positions–like the prone shooting position–they find shooting well can be difficult.

These positions can change how you see your sights and grip your handgun, and therefore influence trigger press. But remember the fundamentals are still the same; stance (including alternate stances like the ones discussed here), grip, sight alignment, sight picture, breathing, trigger press, and follow through.

Listed here are the positions I believe are practical and will make you a better defensive shooter.

I prefer the California kneeling shooting position (both knees on the deck) for greater flexibility in upper torso movement and shooting around cover. The extended kneel (strong side knee on the deck) is a close second and allows for the shooter to recover from the kneeling position faster. Making yourself a smaller target is also a plus for having the kneeling in your toolbox of abilities. 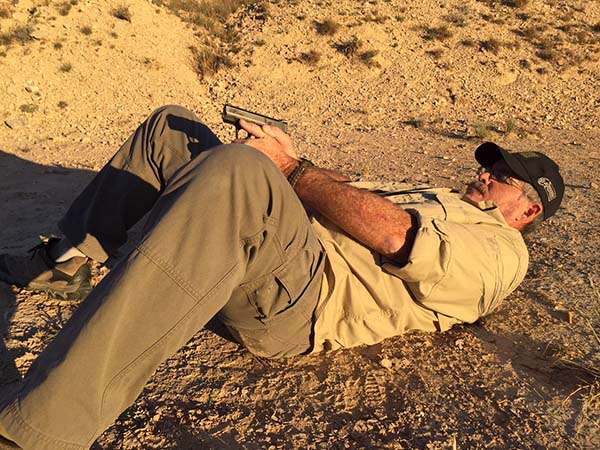 I have seen little training devoted to this position. In reality, it’s not all that improbable that you could find yourself on the flat of your back in a confrontation. It’s s definite disadvantage to be in the position of looking upward at an attacker with a knife, bat or some other deadly weapon in their hands.

You have only a second or two to react. Shooting at a threat standing over you or having to shoot between your knees from your back as a threat closes distance is disconcerting at best. Run some drills with a good instructor while performing these tasks so that your reaction would be: oh yeah, I’ve done this before, if that day ever comes.

Most Americans spend hours sitting everyday, in our vehicles, at work, the café, the movies … it would be logical to devote some training time shooting from various seated positions. Getting your handgun into play from sitting may well be the biggest challenge and something you should not assume will be easy under high stress. How and where you carry your pistol will influence quick acquisition or could prevent drawing it all from a seated position.

While not the most likely defensive position to find yourself in, shooting from prone with a handgun is a skill set I want to have. It does, however, present some unique challenges. Most folks would assume because your body is flat on the ground and you can use both arms and elbows to support the pistol, that prone shooting position would be easy to make accurate hits from.

At 25 yards, I see about a 50% miss rate from law enforcement officers in the prone position. Why? It is not practiced enough and it puts the shooter outside their comfort zone. I teach a rollover prone shooting position that gets the shooter more onto their side and off their diaphragm. This method also allows for resting the head on your bicep instead of straining your neck while lying flat and square on with the target. If you have minimal cover or have something you can get under to shoot from (a vehicle), prone may in fact be just the ticket.

Using cover or a barricade:

There is little doubt that if you find yourself in an exchange of gunfire, cover can be your friend if it’s available and you can get to it. Shooting from or around cover, just like the different positions mentioned above, changes how you see your sights, how you grip your pistol, because now you are doing something outside the box, forcing you to become uncomfortable. You must practice it, from standing, kneeling, and prone. Use cover when it’s available and if the situation allows for it.

Adding these abilities to your skill set will boost your confidence and make you a better shooter. Paired with these shooting positions shooting with movement and one handed shooting are also advantageous … but that is for another discussion.

Like this article from Terry? Then you’ll love this one where he talks about the pros and cons of revolvers vs pistols.