In the history of firearms, there are names that are instantly recognizable to most people, whether they are movie fans, historians, or full on gun-nuts like yours truly. The Colt Peacemaker, ’73 Winchester, Smith and Wesson Model 29, and the 1911 or Old Slabsides.

The 1911 or Colt, Government Model is well known to many people, even if they don’t know the proper name for it, they instantly know it when they see it, as it has starred in as many movies and TV shows as Clint Eastwood, Bruce Willis, and Arnold Schwarzenegger combined.

It was the trusty companion of TV and Movie detectives from Humphrey Bogart to Thomas Magnum, and has been wielded by many movie stars in some of their best roles (in my opinion), Sam Elliot in “We Were Soldiers” and Tom Hanks in “Saving Private Ryan.”

I mean who can forget a wounded Tom Hanks taking on a Nazi Panzer in the final battle scene with his trusty M1911A1?

The Government Model has been in continuous production for well over 100 years and shows no signs of slowing down.

It is made by numerous builders and companies in varying configurations and sizes, the most basic being the 5-inch Government Model, the 4 ¼ inch Commander Model, and the 3 ½ inch Officer’s Model. Companies like Springfield and Kimber have shaved these down a bit with their 4 inch and 3-inch barreled models as well.

In today’s world with so many people taking their own personal defense seriously and applying for concealed carry permits the compact sized 1911s are in high demand and several manufacturers have stepped up to the plate, so there is no shortage of compact 1911s to choose from.

In the late 1960s and 1970s if you wanted to carry a small, powerful handgun for concealment, then you carried a small revolver, say a S&W model 36 in .38 Special. If you wanted big bore then a Charter Arms Bulldog in .44 Special.

As for semi-automatics, it was small caliber pocket pistols or something like a Walther PPK in .32 ACP or .380 ACP.

Of course, there were custom gunsmiths that would cut down full sized revolvers to make them more concealed carry friendly and even a couple of smiths that would chop a full sized 1911 down, but they were all custom jobs that were built to order and priced accordingly.

If you wanted to carry something in .45 ACP then you were either carrying a Government Model, a Commander, or you were going to pay someone like the late master, Armand Swenson to cut down a full sized 1911 to something more concealable.

In the early 1970s a young explosives engineer named Pat Yates, in the employ of the Explosives Company of America (EXCOA), saw some articles about some of the pistols that Armand Swenson was building and wanted one for himself.

He also figured that since he was an engineer with some welding skills that he could do it for himself. This crazy plan was the beginning of the original production compact 1911, that all others owe their existence to: The Detonics Combat Master.

He started by dusting off some old drawings he had done as an engineering student at the University of Florida in the mid-sixties and chopping one of 3 surplus Government 1911s he had purchased for the sum of $210 at a local gun shop.

After the first attempt failed to reliably feed, he went back to the drawing board, then took the hacksaw and welder to the second 1911.

He tried various different barrel locking/unlocking design ideas until he realized that he was not much smarter than John Moses Browning. Once he came to the realization that the swivel barrel link was the way to go, he started on the recoil buffering system.

Several attempts and trips to the range to test his creation, he finally settled on a working model that would reliably feed, fire, and eject his favorite loads.

In 1976 EXCOA was downsizing and some of the former employees had started another company called Detonics Inc. to sell more specialized explosives. One of them, a guy named Sid Woodcock had watched Pat while he made his compact 1911 and thought it would be attractive to a larger market.

He convinced Pat Yates to sell the rights to produce the handgun and after some patent submissions, the Detonics Combat Master was born.

The Detonics Combat Master was the first handgun to come from the factory with features only found on custom guns like a beveled magazine well to facilitate magazine changes and a fully scalloped ejection port to ensure proper ejection of fired cases.

The Combat Master also featured many firsts that would eventually become the industry standard for compact 1911s such as the coned, bushing-less barrel and a captured multi-spring recoil system.

The Combat Master was equipped with a plug to replace the grip safety due to the fact that it was designed to be carried with the hammer down on a loaded chamber and a stiffer firing pin spring to prevent negligent discharge if the pistol was dropped.

To say the Detonics Combat Master was ground-breaking is an understatement, unfortunately it was also about 30 years ahead of its time. In the late 1970s, not many people were carrying concealed weapons outside of the law enforcement community and while the Detonics Combat Master was a popular pistol with the people that used them, they never sold enough to be profitable.

Detonics was in business from 1975 to 1987 making Combat Masters in Seattle and Bellevue Washington under the names Detonics and New Detonics Inc.

In 1987 Detonics was sold to a consortium of investors and moved to Phoenix, Arizona, where it was spearheaded by Robbie Barrkman, of ROBAR finishes where it was renamed the New Detonics Corporation. It only lasted for a few years until the spring of 1992 when all assets were sold at auction.

From 2004 – 2007 Detonics USA operated out of Pendergrass Georgia with the late author Jerry Ahern at the helm. In 2007, Detonics was sold yet again to Bruce Siddle and Dr. Stave Stahl, where the Combat Master once again was the flagship model.

In addition to the Combat Master, Detonics Defense Technologies partnering with STI entered their STX into the US Army Modular Handgun trials in 2015.

Unfortunately, as of this writing Detonics seems to be completely dormant yet again, but the firearm that started it all, the Combat Master is still relatively easy to find in the used market on sites like Armslist and Gunbroker.

The Detonics Combat Master is only slightly larger than a Walther PPK/S, with dimensions as follows;

Capacity: 6 + 1 with factory magazine, with the ability to use Officer and full-size magazines.

I am lucky enough to have 2 Combat Masters in my collection, a stainless MK V and a Military Combat MC2.

The Detonics Combat Master MK V is a Seattle gun and has a brushed stainless-steel finish with Pachmayr wrap-around grips that were produced specially for this model with its short-gripped frame.

It is in nearly “Like New in Box” condition with no signs of ever being fired, but it unfortunately has a faint “take-down” mark where a previous owner was not terribly careful when reassembling it. It has the original box, factory literature, and sheepskin lined soft case that looks like has never seen the outside of a safe.

Needless to say, I have never shot this gun since it is in such fine condition.

The MC2 is a Bellevue gun with New Detonics roll marks and it has a dull no-glare stainless finish that I am told was created by blasting the frame and slide with steel beads. It has been used but shows little signs of wear other than the “take-down” mark and slight holster wear around the edges.

The MC2 is one of my favorite pistols and it is one of my regular carry pistols. It wears a set of handsome wood stocks emblazoned with the “Detonics USA” insignia which tells me they came from one of the later iterations of Detonics (the Pendergrass GA company) and are not original to this gun as the MC2 went out of production in 1984, a full 20 years before Detonics USA came into existence.

Both guns are well built with an outstanding fit and finish, and upon close inspection it is easy to tell that these were meant for concealed carry with a lot of thought and effort going into the assembly of them. All sharp edges have been broken so that there are no sharp corners to snag on an over garment during the draw and presentation.

You would think that the shorter sight radius would have a noticeable effect on the accuracy of the Combat Master but it doesn’t. While the Combat Master will never take home the gold at Camp Perry it does have outstanding practical accuracy. I have no problems keeping all of my shots in the vital areas of a silhouette target out at 15 yards and that is what this pistol was designed for. Practical accuracy under high stress combat situations. 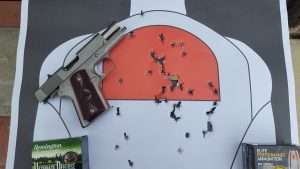 The recoil is stout, but no more so than other compact 1911s in .45 ACP and it is actually pretty easy to get off accurate pairs to the torso area at 7 and 15 yards. I have put over 1000 rounds through my MC2 since I have owned it and have no FTFs or FTEs with ball and hollow-point ammo, most likely due to the generous factory throating job that I have seen on all Combat Masters that I have had the opportunity to shoot. 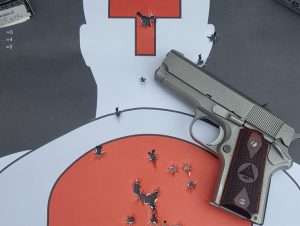 Unfortunately, many factors doomed the Combat Master to an early demise; poor marketing strategy, failures of early guns, and a very hefty price tag (MSRP was $689 in 1985 for MK V and a new Colt Govt. Model was around $389) were some of the multitude of reasons the original company went under.

Detonics has been brought back time and again by new owners but never to the prominence of the original company. Who knows though, in this day where concealed carry is driving manufacturers to make firearms smaller and more concealable, the time might just be right for another comeback.