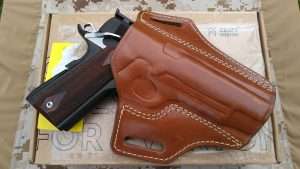 Shortly after the last Shot Show, the boss reached out to me about reviewing a new product from Craft Holsters. At the time I was somewhat familiar with products from Craft Holsters, having run across their products on Amazon while searching for holsters from other manufacturers.

I had never tried one of their holsters as the designs that I came across in the Bezos shop were not what I was searching for. When given the opportunity to review one of their newer designs I figured I would choose a style that I have always liked and prefer to carry, the classic pancake holster.

Over the years I have tried many different styles of holsters in different positions made of different materials, both inside and outside the waistband, small of the back, shoulder holsters, even tried ankle holsters. I have tried leather, Kydex, and the hybrid holsters.

Of all the ones I have tried my favorite has always been the classic leather pancake holster, worn just behind my left hip at the 7 O’clock position. For me, that holster in that position has always given the best balance of comfort, concealability, and quick accessibility should the need to draw my weapon ever arise.

After trading a couple of emails, the fine folks at Craft Holsters shipped me one of their Panther models, an open top leather belt holster of the modified pancake design, for my 1911A1 Government Model. The holster arrived about 3 weeks after we traded our last email and I was pretty impressed from the word go. 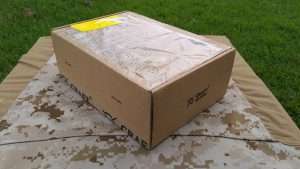 The Panther arrived in a cardboard shipping box adorned with the Craft Holsters logo and when I opened the box I was immediately rewarded with the rich smell of fine leather that reminded me of the smell of the local saddlery/tack shop I used to go to with my mother when I was a kid to shop for new saddles.

It’s a smell you never forget.

The Panther that was sent to me has a mahogany finish but the model is also available in black. 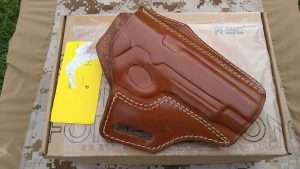 The stitching on the holster is also reminiscent of old school saddle makers, double-stitched around the molded area for the pistol and single stitched around the edges with heavy thread that looks as much at home on a saddle or bridle as much as a holster.

The holster is molded with the lines of the pistol that it is home to, in this case the M1911, and is also molded for a pistol with an accessory rail. Even though my 1911 has no rail, it fit the holster snugly as if it was made specifically for it.

The only issue that I had with the holster was that it was a right-handed holster and I am a south-paw, but I figured that since I did not specify that when I was trading emails with Craft, that was totally on me.


That said I figured I would give it a shot since having a right-handed holster would give me the excuse I needed to practice drawing and shooting with my offhand, in case I am ever forced to do so for … you know, reasons.

Unfortunately, due to the Covid 19 restrictions I have not been able to get out much, but I am also one of those people that carries a pistol with me at all times, even when I am at home (100% of all home invasions occur in the home).

For the last 4 months I have carried my 1911 in the Craft Holsters Panther exclusively, and while most of my days consist of sitting at a desk working on training packages and technical data for Uncle Sugar, the Panther has definitely earned its place on my hip.

After 4 months it shows little signs of wear, other than a couple of scuffs from where my hip got too close to something abrasive, and a very slight deformation of the belt loops, where the belt pulls the holster up close to the body, which is pretty impressive as I wear my belt rather snugly and I have holsters made by other big-name manufacturers that looked worn out and stretched in the belt loop area after 6 months of wear.

The 2 biggest upsides to wearing a pancake-style holster are retention and concealability, and the same factor affects both, belt tension. The tighter your belt, the tighter the holster hugs your body and the better it retains your firearm.

The Panther has the same retention and concealability of holsters costing nearly twice as much. I have often said “you get what you pay for,” but in the case of the Craft Holsters Panther, you get quite a bit more.

The holster hugs your body like it is supposed to and retention, even after hundreds of practice-draws and re-holsters is still outstanding, a credit to the workmanship of the holster.

The stitching shows no signs of deterioration, which is something I have seen in some of the more inexpensive holsters I have tried over the years.

The Panther also incorporates a short sweat-guard that not only keeps your body juices off of your weapon, but also provides a barrier to keep the 1911’s thumb safety from digging into the extra flesh that seems to have grown around my midsection since my retirement from the Marine Corps.

The Panther is surprisingly comfortable for all day wear, especially for an individual who spends their day sitting in a chair looking at a computer screen and the holster wears well when out and about as well.

Of course, concealing a full size 1911 in an outside-the-waistband holster takes some fore thought, but if you wear loose enough cover garments, you shouldn’t have any issues with it printing. I have personally found that shirts 1 size larger works well for concealing large frame pistols.

If I have any critique of the Craft Holsters Panther, it would be on its ride height and lack of a retention adjustment screw.

That said, a quick review of the Craft Holster website shows that they offer both a Hi-Ride Open Top leather belt holster and an Open Top Leather Belt Holster with a retention screw. Craft Holsters also has a Custom Shop, just in case you want a one-off custom holster of your very own. 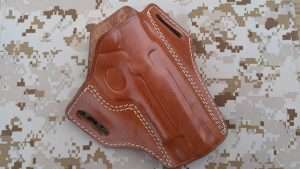 Craft Holsters also has a 30 Day “Buy it Back” guarantee as well as a 5-year warranty on all of the holsters they sell, which is something I cannot remember ever seeing before. 5 years is a long time for a piece of leather that gets strapped to your hip every day, so Craft must really believe in the product they sell.

Craft Holsters seems poised to make a huge dent in the market share of a few of the more well-known companies with an outstanding line of holsters for most popular pistols and revolvers on the market at prices that are a fraction of their competitors and holsters available in left-handed options for us wrong-handed shooters.

To see the full line of holsters available from Craft Holsters, check out their website at www.craftholsters.com.