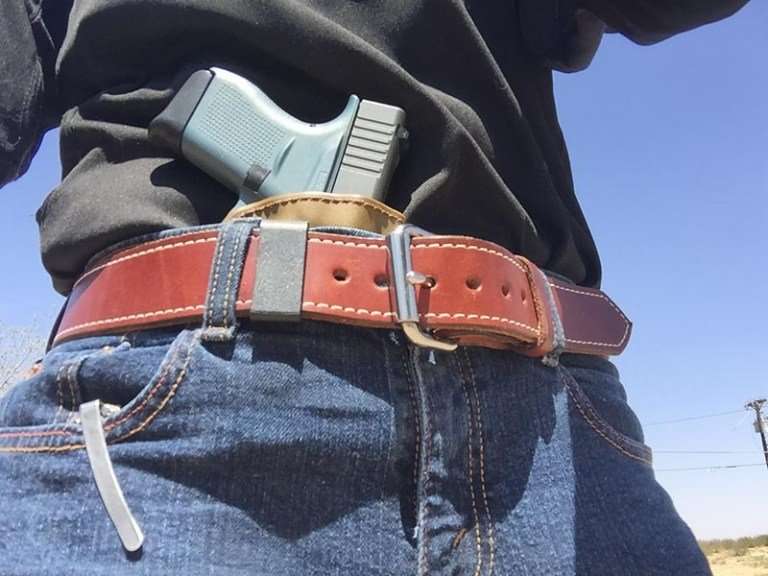 It should come as no surprise to anyone at this point that I’m an advocate of concealed carry over open carry. I have no problem with carrying openly if that’s what you want to do and I have done it myself on more than one occasion.

But, I prefer concealed carry for a few strict reasons. One of those reasons is that it affords me a tactical advantage if I’m the only person in the room who knows I’m armed.

Obviously if I’m with family or friends that may change, but them knowing I’m armed isn’t a bad thing. The reason why is because your friends and family are hopefully not going to be hurting you.

So, concealed carry is where it’s at for me and most of the people who carry guns for self-defense.

But I see some people attempting to carry their guns in a concealed manner who are actually giving away that tactical advantage by the things they’re doing.

Sometimes I’ll try to help them out a little bit, but most of the time I keep to myself.

Here are some of the ways that you can give yourself away:

Touching or adjusting your gun —

This is a big one and something that you may be doing without even realizing it. A lot of concealed carriers do this and I’ve done it myself when I was new to this lifestyle.

Sometimes people want to make sure their gun is still there. Other times people need to adjust their gun back to the spot where they put it on. Whatever the reason, it’s not a good idea to put your hands on your gun in public, unless you need it for self-defense.

If you need to adjust it or touch it to make sure it’s still there, excuse yourself and find a bathroom stall or something.

The only thing that fixes this is confidence in your gear that you’ll gain after carrying your gun for a while.

To fix this, just try to make a conscious decision to not touch your gun. If your gun moves and you feel like you need to adjust it, you should get a different holster that doesn’t allow your gun to move.

You should also practice carrying your gun at home to help you gain confidence.

Removing your gun to sit —

I’m going to catch some heat for this one and that’s okay because I stand behind what I say. Unless you’re medically unable to sit with your gun still attached to your body when you’re driving or otherwise sitting, you should keep your gun holstered on your body at all times.

I’ve driven from Pennsylvania to Florida with a gun on my hip and if my fat ass can do it, you can do it too. It may not be the most comfortable thing, but it is the safest thing and you should always strive to be safe, not comfortable.

If comfort was the primary concern you wouldn’t be carrying a gun for self-defense at all.

Why do we say this? Well, there are several reasons, but I want to keep this short so I’ll only cover one here in this article, and then write another article in the future covering them more in detail.

If you were to get into an accident while driving, and accidents happen all the time, anything left unsecured in your car goes flying around the inside of the car.

So what? Well, after an adrenaline dump that occurs when you get into an accident can you guarantee that you can safely grab your firearm without accidentally pulling the trigger?

Or, what if your gun flies out of an open window?

Don’t say it can’t happen because auto accidents happen all the time and it can happen to you.

Leave your gun holstered on your body, and if you can’t, find a different setup.

One day not too long ago I had an HVAC guy over my house and as he came down the ladder from my attic, his non-fitting shirt decided it would ride up and let me take a peak at his SIG Sauer P365.

This is incredibly important. I asked him, so you’re a SIG guy huh? And he looked at me with a dumbfounded look on his face, clearly not expecting me to see his gun and ask him about it.

I did this not to be a jerk, but because I don’t want him to give away his tactical advantage. And if he was in the house of someone who hated guns, that could have ended very badly for him and his job.

If your goal is to carry a CONCEALED gun, you better keep it concealed. Period. This means wearing clothing and shirts that actually fit your body.

I don’t mean you need to wear a shirt designed for concealed carry, but one that helps you hide your gun and won’t ride up on you.

If you wear clothing that doesn’t take into account that you’ve got a gun on your hip, you’re basically asking for people to take a look at your pistol. Had he been more careful with his choice of clothing and holster I should not have been able to see his gun.

If I was a criminal I could have removed his gun in a position where he was incredibly vulnerable as he descended down a ladder and he would have been defenseless. Thankfully for him I’m not a criminal.

And this is exactly the point. You want to prevent people from knowing you’ve got a gun on you so they don’t take it away from you and use it against you, and then other people.

There are a lot of documented incidents where folks weren’t using the right gear or clothing and had their guns taken away once a criminal saw it.

Always make sure you’re setup properly with clothes that fit well and hide your EDC tool to ensure you don’t become one of these statistic victims of gun theft.

That about does it for this time. Make sure you’re tuned in for part 2 as I go over more important concealed carry tips for both the beginner and the veteran.

If you like the holster in the picture at the top, it’s known as the JM4 Relic. Find it here.