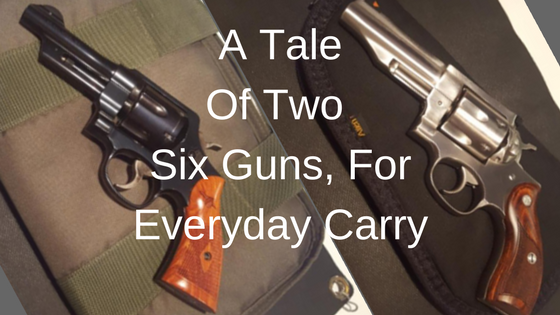 When it comes to firearms I have wide and varied tastes. From antiques to the latest tactical lead-slingers, if you can use it to put steel on target then I am in. I have owned many different firearms over the years from single action black-powder Colt replicas to Gen IV Glocks, flintlock Pennsylvania rifles to the Colt M4 and everything in between.

My love affair with big-bore handguns started at age 13 when my step-dad and his cousin thought it would be funny to have me touch off a .44 Rem Mag from a Thompson Contender. The recoil was substantial, the muzzle blast was deafening, and I was hooked. Since then I have owned and shot countless handguns in calibers ranging from .44 S&W Special to the mighty .454 Casull and beyond.

While my everyday carry piece has been a variety of semi-auto pistols for several years now, I have been toying with breaking into the safe and dusting off one of my trusty wheel-guns to do daily duty. Now I have read and heard all the arguments in favor of the semi-auto for defensive carry and for the most part agree wholeheartedly with them. However, there is still an argument to be made for the simplicity and inherent reliability of a double action revolver.

When I started digging through the safe I settled on two of my favorite revolvers, a S&W Model 22-4 Thunder Ranch and a Ruger Redhawk both in .45 ACP. Now choosing a favorite between these two revolvers is like trying to choose a favorite between my kids. So I figured I would do a full comparison of the two on their merits to figure out which would reside in my holster for the foreseeable future.

The Smith and Wesson model 22 traces its lineage back to the beginning of the last century in 1908 when S&W introduced the .44 Hand Ejector, First Model “New Century”, better known as the “Triple Lock”. These were the handguns that Elmer Keith used to develop .44 Special loads that eventually gave rise to the .44 Remington Magnum.

The First Model was discontinued in 1915 and was replaced by the Second Model which was adapted to fire .45 ACP by using half-moon clips. Dubbed the M1917 by the Army Ordnance Department it was adopted to supplement the M1911 during World War I and saw service thru the Vietnam War. It was sold commercially as the Model 1950 and was reintroduced as the limited production Thunder Ranch revolver.

The Ruger Redhawk was first introduced in 1979 by Sturm, Ruger and Co., Inc. The Redhawk was initially chambered in .44 Magnum and was produced to compete with the S&W model 29 which were in short supply due to the popularity of the “Dirty Harry” movies of the late seventies.

The Redhawk is a beefier, scaled up version of the Security Six line of revolvers. It was unique in that it used a one piece frame, unlike other double-action revolvers that had removable side plates giving it unsurpassed strength. In 2015 Ruger introduced the Redhawk with a 4 inch barrel and round butt in a .45 Colt/.45 ACP chambering that had the cylinder machined from the factory to accept .45 ACP using full moon clips. 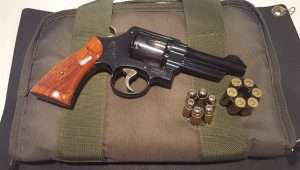 The Redhawk measured out to the following dimensions with the aforementioned equipment. 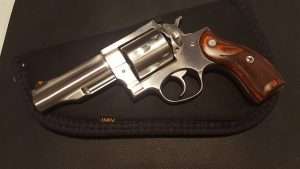 Shooting these revolvers is a blast to say the least. Felt recoil was surprisingly light due to factors like weight and grip design. Both revolvers were fired at ranges of 7 to 25 yards in both double and single action modes. I have 2 sets of aftermarket grips for the S&W, but due to an extremely limited aftermarket for the round-butt Redhawk (read non-existent) I put the factory stocks back on for the comparison to compare apples to apples.

I have owned the Thunder Ranch for a couple of years now and it came used with the Hogue monogrip installed. I have also purchased a Pachmayr gripper grip for it as well. I have shot it extensively with both and have found it to be less than comfortable. Both of the aftermarket grips for the Smith always seemed to direct the recoil right into the meaty part of my hand between my thumb and trigger finger. After a couple of cylinders of hardball I would start to anticipate the pain that I knew was coming, leading to less than satisfactory shot groups.

This was my first time shooting the Thunder Ranch with the factory stocks and I have to say that at first they felt a little funky in my hand while holding the revolver. I am used to grips on a revolver that put my trigger finger a little more in line with the trigger. The factory stocks seem small and my trigger finger at full extension lay across the gap where the bottom of the cylinder and frame meet. I know why the Tyler T-Grip is so popular for these models. However; when it comes to felt recoil, whoever designed these stocks should be given a promotion. The width of the factory stocks spread the recoil out into my hand to the point where after 150 rounds of factory FMJ I had no tenderness in my hand whatsoever.

In addition to what I would call mild recoil, the muzzle flip was controllable to the point that I had no issues getting off double-taps and running a Mozambique drill (two to the chest, one to the head) was also within the realm of reality. The rudimentary sights (grooved top-strap and half-moon blade up front) were quick to line up and surprisingly easy to see. The wide blade up front makes it relatively easy to focus on your front sight when you are putting lead downrange. I was able to keep all but one in the black at 10 yards when I ran several double taps. Having never qualified past sharpshooter with the M9 during my career in the Marine Corps, I was surprised by how accurate this handgun was in my hands. 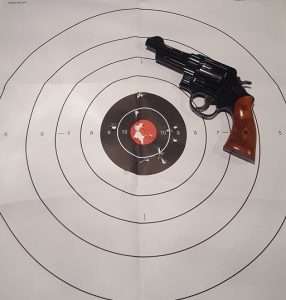 My first impression upon picking up the Ruger Redhawk was “this thing is a frigging tank”. At 45 ounces empty, it is without a doubt a heavy revolver. It is very well balanced though and points easily. The stocks are also very well designed to do a very good job of spreading out felt recoil. The weight helps soak up a lot of the felt recoil and muzzle flip as well. The double action trigger is a hair smoother than the Smith and I could actually feel the cylinder lock up during a long, deliberate double action pull. That being said it was very easy to shoot rapidly in double action mode.

The adjustable rear sight and red blade up front make it very easy to line up the sights and the quick change front sight will make it easy to swap for a fiber optic front sight in the future. My Redhawk grouped about 1.5 inches to the right of center and unfortunately I didn’t bring a screwdriver with me to the range so I wasn’t able to make any sight adjustments. The Ruger grouped just as nicely with the 230 gr FMJ as the Smith. My 10 yard double taps were surprisingly not as tight as with the Thunder Ranch and I apparently started to anticipate the recoil and push into it. However even with my pushing and jerking it still retained pretty good accuracy for a close range gunfight if it ever (God forbid) comes to that. 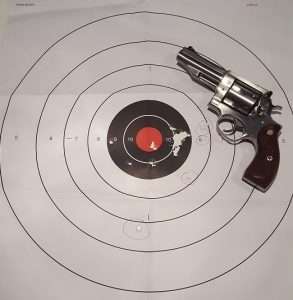 I was pleasantly surprised by the manners of the Thunder Ranch revolver even though I shouldn’t be. It was, after all designed to be a fighting revolver. The Ruger on the other hand owes its lineage to a revolver designed to soak up full power magnum loads and ask for more. It was designed originally for handgun hunters and was over-engineered in that respect. The fit and finish on both is what you should expect from these companies without a doubt.

The brushed stainless and checkered hardwood stocks on the Redhawk are just plain sexy in my opinion, although I have a built in bias towards stainless firearms as I think they just have a clean, sanitary look. The bluing on the Thunder Ranch however belies its true intent. It is deep and rich, definitely one of the nicer factory bluing jobs I have seen in a while. The Cocobolo wood contrasts nicely with the bluing and really makes this revolver almost more of a collector piece than a fighting handgun for carry.

Of course good looks aren’t everything and as they say in the car world “Chrome don’t get you home”, hits are the only thing that counts in a fight and both handguns are definitely capable of getting you home. The adjustable sights on the Ruger are much better suited for hunting in my opinion. Personally I just prefer fixed sights on a carry gun, as there is less chance of Senor Murphy showing up and screwing up my day. While I may have to try out different ammo to find one that shoots point of aim, once I do, game on.

Since I carry all day every day, weight will be another huge factor and the Thunder Ranch is the obvious winner here at almost 9 ounces lighter than the Redhawk. Remember we are going for concealed everyday carry here. As they say in the Infantry “ounces equal pounds, pounds equal pain” and if I don’t have to carry around an extra half pound strapped to my waist I’m not going to.

I am a Diesel Mechanic by trade and live by the adage of using the right tool for the job. My firearms are no different. If I am out in the woods in bear country the Ruger Redhawk would be my handgun of choice. It has the versatility of using both .45 ACP and .45 Colt and I would not feel under-gunned if I was carrying some Buffalo Bore 325 gr LFN ammo. I would also not be concerned about concealment while hiking or hunting in the woods and would probably be carrying the Redhawk in a hunting shoulder holster.

Since the job here is everyday concealed carry of a fighting handgun, I have to go with the Thunder Ranch for the win. With fixed sights that won’t work themselves out of alignment due to screws coming loose, lighter weight that won’t pull my spine out of alignment after 12 plus hours on my hip and quick reloads of accurate and powerful .45 ACP thanks to the use of full moon clips. The Thunder Ranch is what a fighting handgun is supposed to be: simple, accurate, and reliable enough to bet your life on.

Do you carry a revolver for your everyday carry? Let us know in the comments below. Also, if you’re a revolver person, check out this interview with one of Colt’s VPs on their newest .38 wheel gun.