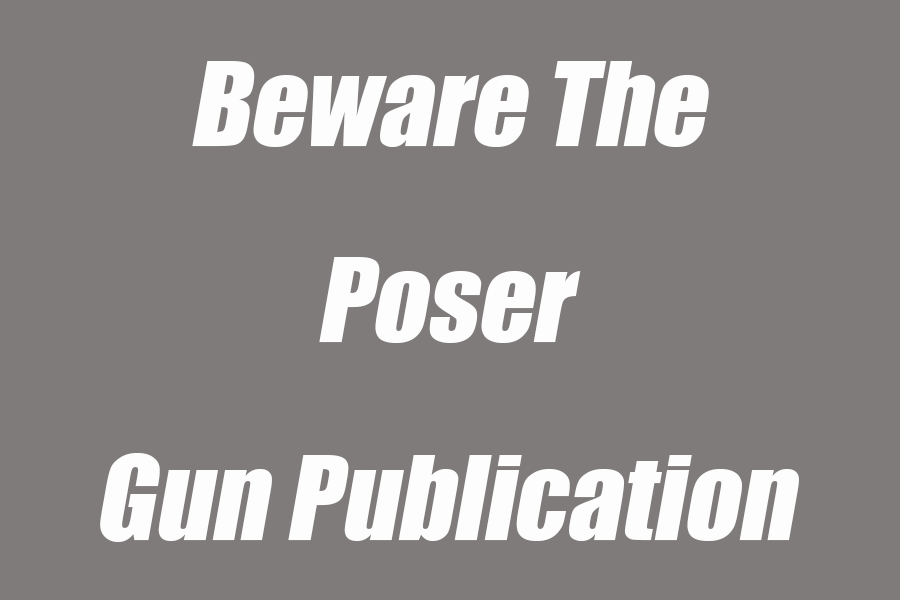 I want to warn you of something that has been concerning me for the past several years but have never been able to point out until now.

Now that we’re a bit more secure with our current website traffic I feel like I can take the brunt of any backlash I may experience. Still, I have to tread lightly here and will not name anyone at this time. These are publications that have a lot more money than I do and I’d get slaughtered by naming them.

The warning, is that there are some publications out there who claim to be pro-gun, write some articles, and the people who own the website don’t even own a single gun as was the case for a big publication I used to work for.

Or worse, they’re owned by people who are actually anti-gun, as was the case for someone else I used to work for.

They do it for one reason: To make money off us. But it is my every intention to show you how to tell who they are with certain criteria.

There are a few different ways you can tell who these websites are when you get to them, but looks can be deceiving and these traits I’m about to show you aren’t the end all.

In fact, there is a major firearms website owned by anti-gunners with an editor who doesn’t even own a single gun and they are YUGE! Yuge as in fooling millions of gun owners each month as they continue to write gun reviews and news.

This publication has gone on record for firing people for being too pro-gun and taking a pro Second Amendment stance. It’s not good.

I can’t name them because, again, I’ll get my ass handed to me on a silver platter. Use your brain to try and figure it out.

So, how can you tell some of these websites? It all starts with knowing what is expected of a gun writer/publisher and checking that against what they’re actually doing.

Many of these websites only publish very topical articles. Think about things like “best of lists” or “top tens.”

Now, don’t get me wrong here. There are many great publishers out there who ALSO publish this type of content in addition to more in depth content, us included. However, is this the only stuff they’re publishing? If so, that’s a red flag.

Websites who are only focusing on those types of articles, like comparisons, or what I like to call “VS” articles, etc., are only doing so because those topics are easy to research and you don’t technically need to know anything about guns to write them.

They are just regurgitating information back to you that they read on some other, much better website where the people are actually dedicated to the Second Amendment. I know this because I have worked for one of them in the past before I knew any better.

You can tell these websites because that is the only type of article they write.

If a website only has “best of” lists, chances are good you’re looking at a website written by people who don’t know anything about guns.

They research articles written by knowledgeable folks and re-write the content in such a way that it ranks higher in search results.

Again, the key here is that they only write topical content that will rank well, and nothing else. A good indicator is to type in the word “review” into the search bar on their website. If no gun or gear reviews pop up, it could be because they suck.

If you need more evidence, another indicator is when a publication never reports on gun-related trade shows like NSSF’s SHOT Show, the NRA Annual Meetings, etc. If you go to a website and can’t find any coverage, that should be a red flag.

This isn’t always an indicator, because these events are very expensive to go to and many folks just cannot afford to go. If that’s the case, they should be writing other types of articles.

But, this is an indicator, nonetheless.

The main reason why, is because in order to go to these events you usually have to prove yourself to be worthy. Sounds horrible, but it’s true.

Heck, even to go to SHOT Show’s Range Day you have to be invited by an exhibitor. Many within the industry believe that if you don’t go to range day you’re not legit. I see why. A few years back it was easy to get in to SHOT and everyone and their uncle went and it was a poor experience for many.

It has tightened up since then and last year was much better. They kept out the riff raff so to speak.

I want GunnersDen.com to be taken seriously. We therefore go to SHOT, NRAAM, and others to prove we’re worth it.

We are worth it, by the way, and I’m glad you’re here.

Go to whichever website you’re concerned about and type SHOT Show into the search bar. If nothing pops up, or it’s been a few years since they’ve gone, it’s worthwhile digging deeper.

You can perform a search for my name, either Josh or Joshua Gillem and see all the gun publications I’ve written for.

You’ll have to scroll through a couple of pages to get through the social media and other junk, but it’s there and that’s the key. You can verify who I am and what I’ve done to date.

I have verifiable experience on MAJOR gun publications and am even STILL the Managing Editor for ConcealedCarry.com. No joke, here’s a link to my author profile. Don’t get me wrong, I’m not tooting my own horn here … I’m trying to prove an important point.

It’s less about never hearing the writer’s name and more about seeing if that person has a history. I mean, this is a good practice to get into anyway just because you may be taking advice from this person.

Do you want to take their word for who they say they are? I don’t. Here’s the thing, any legit gun website will have at least one person on staff who has written for more than that one publication.

If they don’t, that’s a red flag. Now, it could just mean that this person has tried for years to break-in to the industry and couldn’t so he/she decided to branch out on their own. Sadly, there isn’t a real way to verify that beyond stalking that person.

But if they have only brief experience with that that one publication, it may be worth checking into further, or just disregarding altogether.

Then again, it isn’t that hard to reach out to one of the big pubs and ask for them to allow you to do a guest post. At least then you’re getting your name out there.

If the website in question violates this it’s a huge red flag.

At this point in the age of the interwebs, not having an about us or contact page is career suicide. There are still some pages out there that don’t have them and the only reason why this could be is because they’re hiding something. Or they’re stupid. Either way, I don’t want to take advice from that person.

Chances are good that these poser publications are only using stock images and other people’s YT videos because they have none of their own.

Anyone can go to YouTube and embed a video, passing it off as their own. If they do that, chances are good visitors won’t pick up on it and if they’re trying to say they’re a channel that has even a few hundred followers they get instant credibility.

I’ve worked for a place that told us to scrape content off YT and transcribe it to pass it off as an article. That’s when I started asking more questions. Granted, this was when Obama was still in office and they were capitalizing on the gun market being what it was, and fear.

Also, anyone can use stock photos. Heck, I still use stock photos in certain articles. Sometimes it just makes sense. But, if you’re looking through a website and they only have stock photos pulled from gun and gear manufacturer websites, chances are good they’re a sham.

By the way, most of our social channels to include our Facebook and YouTube, are still called Down Range Daily. That was our website for almost 3 years. I’m still trying to work that out. It’s just not easy to get changed.

This can be a tough one, which is why I put it last. There are some perfectly legit gun-loving companies behind enemy lines and that’s a fact.

But, if you know a certain publication is based out of California, Chicago, or any other super liberal place they at least deserve a second look.

Now, again, this isn’t always the case and this isn’t the best example of what to look for. But, if they’re in one of these areas and don’t go to SHOT Show or any of the other items on this list, they could be a turd.

We are based out of Western North Carolina, by the way.

So why am I telling you all this? Because these websites are out there and we shouldn’t reward them. Take these tips to the bank, locate which websites they are, and don’t visit them anymore.

Avoid them like you do Starbucks and Target. I’m not saying you have to spend more time on my website, though I wouldn’t fight you if you did–but any of the pro-gun websites will do.

The best thing is to go with your gut. If you land on a page and you’re not sure because something seems off, it could be.

At some point in the near future I’ll put together a list of the websites I know without a doubt are run by good, pro-gun people. Stay tuned for that, because it’s in the works.