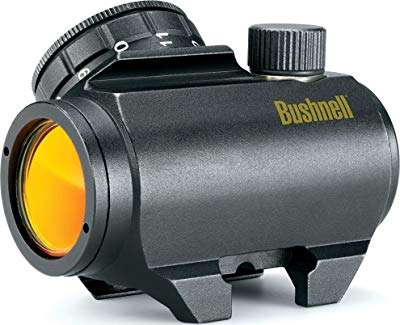 Red dot scopes are one of the best technological advances the shooting sports has seen in the last 30 years. You will find a lot of new technology out there, but you will also see a lot of people that don’t like it or don’t trust it.

One of the main benefits of using a red dot optic, is quick target acquisition while shooting.

They can be found in use in just about every corner of the gun world from hunters to law enforcement/military to competition shooters. The design allows for a clear sight picture, quick target acquisition, and improved accuracy in an easy to use, dependable, and rugged optic.

Of course with so many manufacturers in the red dot game, the choices are not only numerous but also run the gamut from $20 to $2000 and up.

Most of us don’t have $2000 for a new one but trying to figure out which of the lower cost optics is worth the money can be a daunting task as well.

It’s our goal here to take a look at 3 of the best red dots that are priced on the lower end of the spectrum but will get the job done and perform flawlessly.

We will also look at the pros and cons of each sight and will try and narrow down which of the three is the top contender, though the perfect choice depends on the weapon you will mount it on and the shooting conditions. 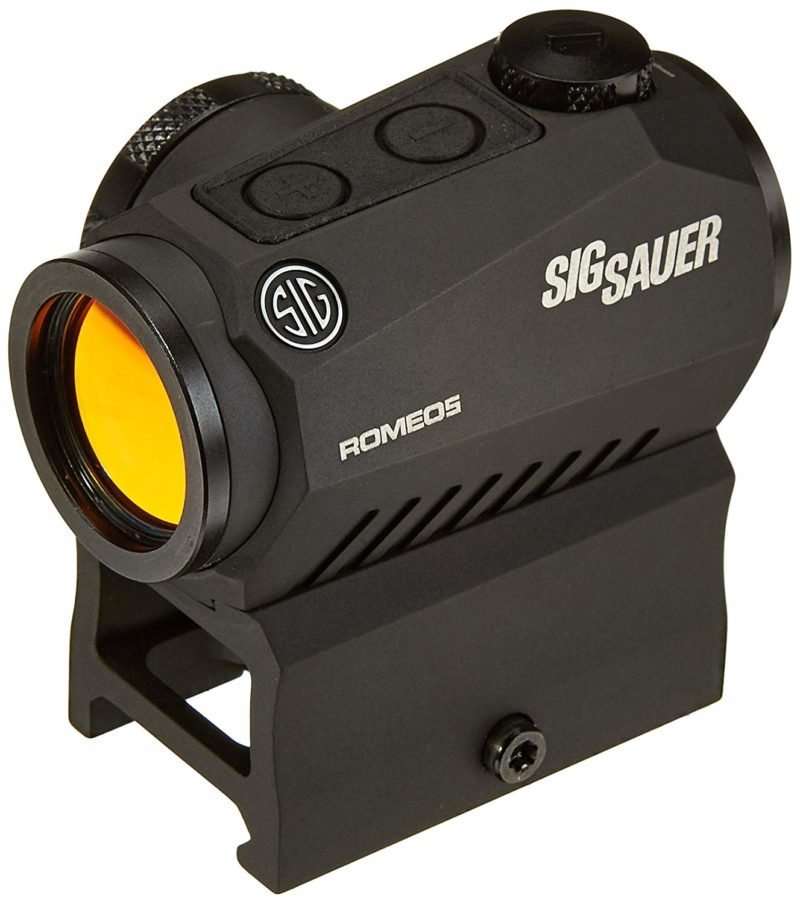 The first optic we are going to look at is the Romeo5 1x20mm red dot made by Sig Sauer. Sig Sauer designed this sight with tactical applications in mind, and it has become a favorite among the law enforcement / military crowd for its dependability and clear sight picture.

The Romeo5 optic features a 2 MOA red dot with a 1X magnification and a 20mm front and rear objective. It has ten different illumination settings, eight daylight, and two for the night. The optic is rugged and waterproof (IPX-7 rated- complete water immersion up to 1 meter).

The Romeo5 has multi-coated lenses for fog proof performance and has an integrated M1913 Picatinny interface, which gives it industry standard mounting. The Romeo5 is made in the USA and comes with a five-year limited warranty.

The lens coating used by Sig Sauer on this optic is Spectracoat, which is a proprietary product. According to Sig’s website Spectracoat is a highly efficient, ultra-wide broadband, anti-reflection lens coating that reduces surface reflections to extremely low levels across the entire visible spectrum providing superior light transmission.

So not only does it assist with keeping the optic fog proof and maintaining a clear sight picture, but also provides total anti-reflectivity protection without the use of additional attachments.

Another interesting and proprietary feature is Sig Sauer’s MOTAC (Motion Activated Illumination) System. The MOTAC system senses motion and will power down the sight when there is a lack of movement, but will power it back up when it detects even the slightest movement.

This action reduces power consumption and allows for significantly improved battery life with Sig claiming up to 50,000 hour run times with some batteries. That is over five and a half years of run time on a single battery change, which is impressive for any optic.

Users from all walks of life have great things to say about the Romeo5, but as always there are some cons as well. The number one complaint is about quality control. A lot of users have received non-working units or units with defects and cosmetic issues.

While Sig Sauer will exchange or replace the optic without question, it is never comforting to open a brand new product and discover it has problems before being used, making you question if all the internals are up to par. Not a good thing for an optic you may be relying on in a life or death situation.

Another issue I have with the optic is the MOTAC system. I may be “old-school,” but I don’t see a reason to add in more things that can break or go wrong into an optic. From a tactical standpoint, the possibility that you shoulder the weapon and the sight is off or not working is a significant problem.

While the system is well tested and appears to function as expected, I would rather change the batteries more often and know that my sight is going to be there when I need it.

Next on the list is the Trophy TRS-25 red dot by Bushnell. This sight was built with hunters in mind but can adapt itself to most conditions well.  The Trophy TRS-25 is a 1X magnification red dot with 20mm objectives.

It is guaranteed to be waterproof, shockproof, and fog proof and has a nitrogen filled tube. The lenses are multi-coated to battle the elements while delivering a clear and bright sight picture. The optic runs off of a CR2032 battery and has unlimited eye relief.

Bushnell designed this optic to have high accuracy and quick target acquisition. These factors are one of the reasons why the Bushnells markets the Trophy TRS-25 towards hunters. This optic also has what Bushnell calls Amber-Bright™.

According to the Bushnell website, Amber-Bright optics help you quickly distinguish between a brown tree and a brown critter. Amber-Bright is just one reason Trophy riflescopes have been heralded as the ideal scope for the autumn deer woods.

The sight appears to have one major complaint, which is that it will turn itself off when shooting. The sight generally powers right back on but losing your sight while firing is not a good problem to have in most situations.

The second major complaint is that there is a red glare in other parts of the lens when using the higher settings. I had never experienced it with the TRS-25 when I used one, but other users reported it nonetheless.

I would be willing to say that this is caused by using too high of an illumination setting for the conditions, but there is no way to know for sure. There are also some complaints that the dot will not zero or will not stay zeroed, but no more than you can accompany to user error.

Overall the sight appears to be a crowd pleaser. It appears to be built well and performs well. It is small, lightweight, and rugged. The price point when considering all of the features makes this optic hard to pass up if you are looking for a cheap red dot; however, I would be more adept to recommend this one to the hunters, and less so for someone wanting it for a tactical situation. 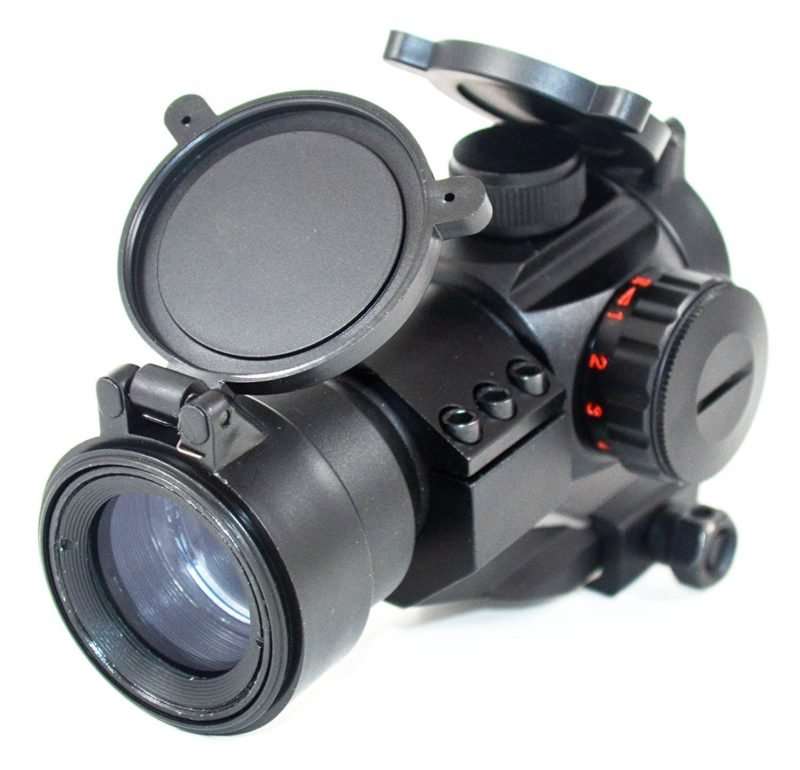 The third optic on our list is the Rhino Red Dot by Ozark Armament. Ozark Armament (OA) is a newer company to the gun accessory market, and they claim to make high quality, no-frills equipment that gets the job done without a considerable price tag.

Their gear feels well made, and the stuff seems to work well. OA offers a no-hassle lifetime guarantee on their sights and even use the tag line “Our sights are so durable we practically beg our customers to abuse them.” in their advertising.

The Rhino Red Dot is a 4 MOA optic with a 28mm objective and a 1X magnification. It has adjustable brightness settings, runs on a single CR2032 battery, and has an option between a red dot or a green dot.

The tube is nitrogen purged and sealed to provide 100% waterproof, shockproof, and fog proof performance with OA promising the sight “to work in any condition you’d find on Earth and probably even Mars!”

The Rhino Red Dot is designed to work best in short and medium range shooting and OA markets it towards the tactical and law enforcement/ military crowd. With its 5 green and 5 red brightness settings, it is adaptable to a wide range of shooting conditions. It is designed to “co-witness” using their included mount, which is a benefit to some.

The windage and elevation are easy to adjust and stay where they are put, even through heavy fire. The optic is also built to withstand heavy caliber weapons, up to 50 BMG, which is where some others seem to start failing.

The biggest issue that users have reported with this sight is quality control. There are a lot of reports of people getting brand new optics with defects and having to exchange them. Most of the flaws appear to be mainly manufacturing errors rather than actual failures.

Basically, when you get a good one, you should be ok, but you may have to exchange it once, or even twice to do that. Not what I would consider ideal, but for the price point, I suppose you have to cut corners somewhere.

The second issue is with the dot itself. This optic is a 4 MOA red dot, which of course means that at 100 yards the dot will cover a 4-inch plate. While that is fine for shooting at human-sized targets, that is about where it ends. If accuracy is needed, this optic would be for short range shooting.

Another complaint about this one, is that it seems to be more of a line than a dot, and seems fuzzy at times rather than crisp and clear. The one I looked through appeared to be crisp to me, so this perhaps may be a personal thing, or it could be more of the poor quality control at work.

If you are really on a tight budget this optic will be about a cheap as you will find that works well. Just know that you may have to sort through a few of them to find one that is 100 % ready to go. 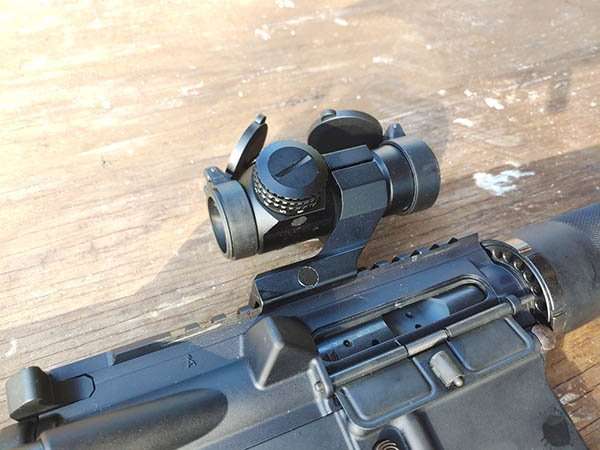 A while back Travis did a review on this budget red dot and gave it very high remarks. You can read his review here.

So which one is the best?

If I had to pick one out of the list as the “best red dot for the money” I would have to go with the Bushnell Trophy TRS-25.

Bushnell has long been known for simple designs that work well and that is exactly what the TRS 25 does. There is not a lot to go wrong other than the battery, and if you are using a red dot you should be carrying a backup battery anyway. The red dot is small and lightweight and has an unobtrusive look when mounted. This is far different from some optics that seem too large and bulky.

The optic is very capable of accuracy and special care was taken to make sure the TRS-25 has a sharp, clear, high contrast sight picture. It is rugged enough to last for years through just about any conditions you would be shooting in and Bushnell has great customer service if you did have an issue.

Being able to get all of this for under $100 makes this sight too good to pass up if you don’t have the budget to break into the top optics on the market.