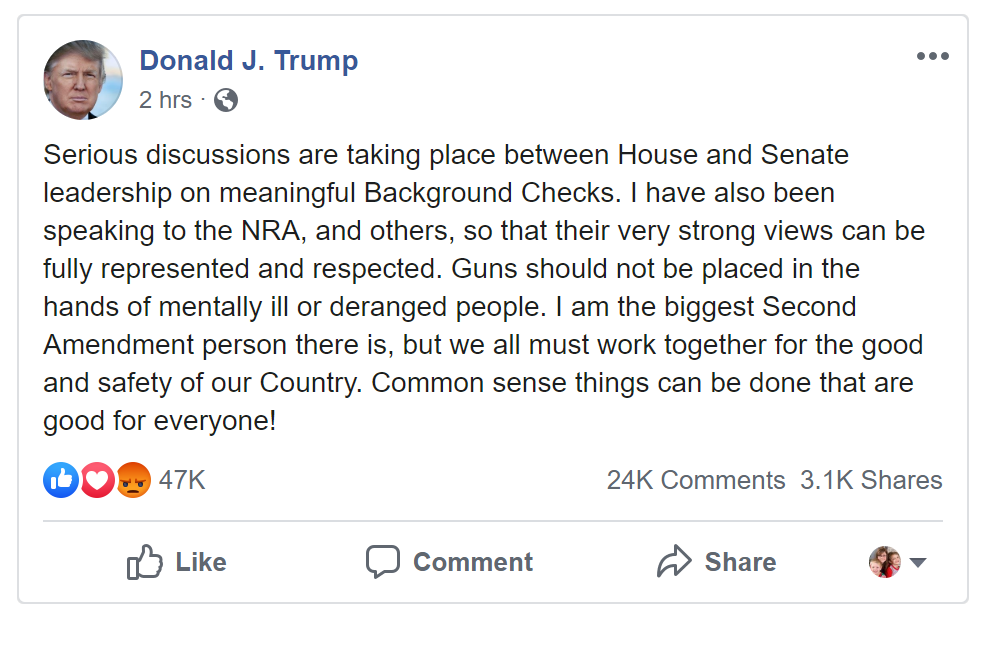 The anti-gun left has finally figured out how to beat president Trump in the 2020 presidential election. If they can divide his supporters on any one of the major topics, they’ll win. It’s that simple.

That major topic, by the way, is known as red flag laws. The path has already been laid out, and the Republican party is imploding. That above screen shot was taken from his Facebook page and that particular post has 24,000 comments on it so far.

Many of those comments are folks saying his presidential bid for 2020 is over if he supports red flag laws, because hundreds of thousands of people will not vote for him if he does. I believe that to be true, and I know I’m personally on the fence.

I don’t know how I could vote for someone who enacted gun control while in office. I mean I work for the gun industry, for crying out loud. That’s almost like putting myself out of business.

Red Flag Laws are essentially nothing more than a restraining order put on people who own guns and may have intentions to do something wrong. The only problem, is that these laws are un-Constitutional in all forms and violate multiple Amendments like the Second, Fourth, and Fifth.

Red Flag laws remove property from people before they commit any crimes, based on hearsay or the opinions of others. There is also some speculation that these laws will use social media posts as evidence to remove said property. They do all this without due process.

Keep in mind that social media giants have been in the spotlight a lot lately, as well, just based on the fact that they have too much power. So, yeah. Let’s give them more power.

Furthermore, most of us who have a solid understanding of these things recognize this as the next step in gun control. And, as history has shown us, once the guns are controlled, so are the people.

Then there is also the simple fact that if someone wants to seek mental health who is a gun owner won’t out of fear that they’ll have their guns taken away. So, in essence, this has the opposite effect. The people who need it the most, good people, won’t get help. That’s just sad.

And now for the part we’ve all been waiting for, a grammar lesson. I’m an editor. I’m not a great editor, but I am an editor for the gun industry and have been for almost four years now. Let’s take a look at the word “but.”

The word but, as President Trump used in the above Facebook post, is a conjunction. It can be defined as:

used to introduce a phrase or clause contrasting with what has already been mentioned.

So, when a boyfriend is talking to his girl, I love you, but, we’ve gotta break up. Or, a criminal robbing a couple walking down the street, I don’t want to rob you at knife point, but I need crack.

Or, I’d love to vote for president Trump like I did the first time, but he sure does seem to be anti gun and I cannot in good faith vote for someone who enacts gun control.

Whenever you use the word “but” in a sentence it completely negates everything you said beforehand in that sentence. His die hard fans and supporters will vote for him no matter what what he does. Those of us, like myself, who voted for Ted Cruz in the primary, well, we may be testing the waters. After all, what I see when I read that sentence is this:

I’m president Trump the biggest Second Amendment supporter there is, but I’m really not pro gun at all.

President Trump, I’d vote for you again, but only if you don’t pass any gun control legislation. See what I did there?