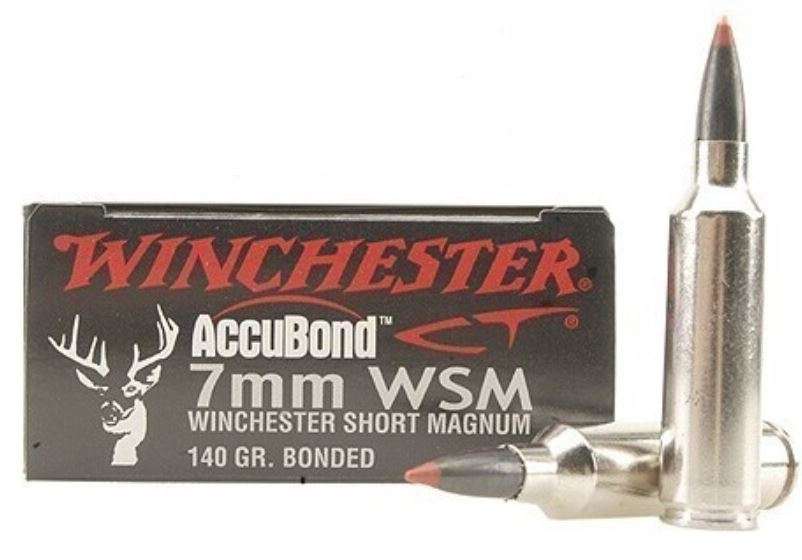 This rifle cartridge made its debut and was introduced to the shooting public in 2001.

The 7mm short magnum cartridge is chambered in Winchester’s Model 70 bolt action rifle and is based on the 404 Jeffery cartridge case.

The parent case was shortened to 2.100″ and necking down to .284″ with sharpened shoulder angles, to 35 degrees.

The 7mm WSM cartridge offers plenty of case capacity for tailored handloads, and it really excels for those who take pride in fine tuning their loadings.

The 7mm WSM cartridge achieves its useful purpose as an excellent long range cartridge for mule deer, sheep, black bear, and elk, as the .284″ caliber is a time-proven caliber for elk and deer size game animals.

The 7mm WSM cartridge is a well thought out cartridge as Winchester is no stranger in .284″ caliber cartridge development. Winchester has now developed 2 cartridges in this caliber; (284 Winchester in 1963), and (7mm WSM in 2001).

The 7mm WSM factory loadings show a velocity of 3,225 feet per second for a 140 grain bullet for deer and sheep hunting and this translates to moderate recoil for the shooter.

There is plenty of bullet energy left over at the 500 yard mark to cleanly flatten a larger deer size animal with a well-placed shot.

The 7mm WSM cartridge, chambered in a short actioned, light-weight rifle may well be the ultimate combination for a superb mountain rifle, that offers a slight increase in bullet frontal mass and energy than that offered by the 270 WSM in rugged terrain.

Most rifles chambered in this cartridge show plenty of accuracy with long range 160 grain weight bullets.