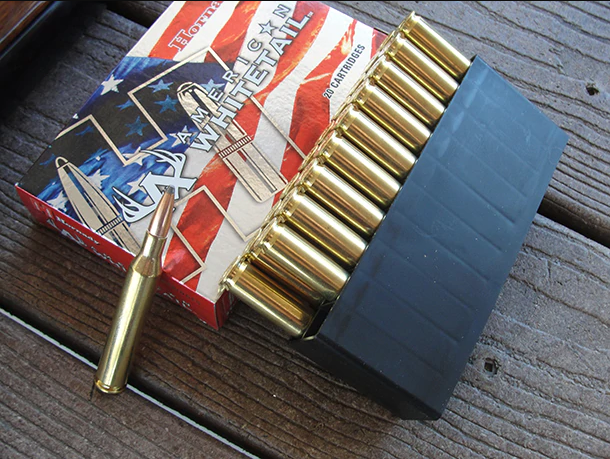 Both the 22-250 and the 25-06 have been called the ultimate in predator or varmint hunting cartridges. Both of them are well equipped with fast-moving projectiles that shoot flat. Having said all of that, they are really two totally different cartridges with wildly varying bullet weights.

Which one you choose will be based largely on your hunting needs. Before we take a bigger look, let’s give a brief overview of the two —

When you’ve got to go a longer distance, the 25-06 wins out both in drop and its wind bucking ability, but not by much. Because it’s a heavier round, the wind doesn’t affect the 25-06 as much, keeping it on target better.

When it comes to drop, the 25-06 actually impacts the target higher than your targeted area at 200 yards and is one of the flattest shooting cartridges available.

Having said that, the 22-250 is certainly no slouch and is also a very flat shooting round only dropping between 1 and 2 inches at 200 yards, depending on the weight of the projectile being fired.

Recoil is one of those things that is hard to discuss because many things need to be taken into account in order to accurately calculate it. Things like the weight and size of the rifle, bullet weight, etc., all need to be discussed.

That said, if all things that could be equal were such, the 22-250 definitely produces less recoil and is much more fun to shoot for extended periods of time. In addition, it is also better for newer shooters to help build confidence.

The 25-06 with the bigger grain weight bullet recoils the hardest of the two.

What follows below is a small ballistics chart comparing the two different cartridges to each other. For more in depth info and ballistics, make sure you visit the pages on our website that we’ve got dedicated to each. You can find the 22-250 page here, and the 25-06 page here.

The 22-250 Remington is designated primarily as a varmint and small predator cartridge. Animals such as groundhogs, prairie dogs, skunks, bobcats, coyotes, fox, and up to antelope can be safely taken by this rifle cartridge.

White tail deer can be taken at closer ranges with the heavier bullets.

This cartridge began its life as a wildcat based on the 250 Savage that was necked down to .224. In 1965 Remington adopted it, naming it the 22-250, and chambered their Model 700 bolt actions to shoot it.

25-06 Remington History and Use

The .25-06 was picked up by Remington in 1969. The original rifle for this caliber is the Remington 700, and it is still a popular choice today.

This cartridge is sort of a jack of all trades in that the lighter bullets are capable of taking bigger varmints and predators while the bigger ones can go all the way up to large deer, hogs, and even elk at closer distances under 200 yards.

If you had to pick just one rifle caliber to fill a variety of needs, the 25-06 is by far a better choice. It is a flat shooting, fast projectile capable of taking any animal from varmint sized up to medium-large game like white tail deer and even elk at closer distances.

If your primary targets are smaller varmints up to coyote sized predators, the 22-250 is the better choice as the quarter bore is overkill at that point. In addition, the 22-250 produces less recoil and is easier to shoot.

Please note that these are average, commercial rounds being tested. Some manufacturers make their ammo hotter with slightly different ballistics.