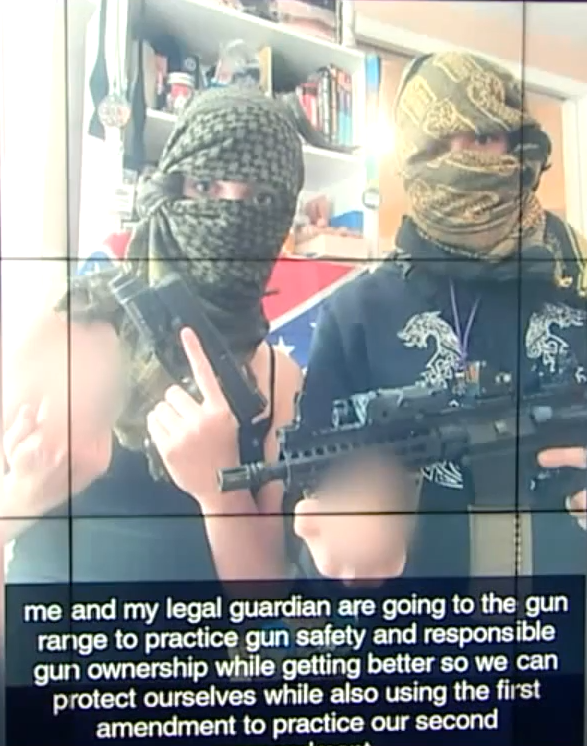 Centennial, Colorado  — A photo put up on the social media site Snapchat has gotten a 17 year old girl in trouble at school, as she posed with her Army veteran brother with some guns. A Confederate flag can also be seen in the background, as the pair flipped the bird at the camera. The caption on the photo reads,

Me and my legal guardian are going to the gun range to practice gun safety and responsible gun ownership while getting better so we can protect ourselves while also using the first amendment to practice our second amendment.

Her school, the Endeavor Academy has suspended the girl, Alexandria Keyes, for a total of five days, forcing her to miss her high school volleyball championship game.

She told reporters that she never meant any harm, though knew that it would be a controversial post. She also did not break any laws. Her mom had this to say about the whole ordeal when talking to school authorities:

Keyes says she often goes to the gun range with her mother and brother, and says she never threatened violence toward anyone and that her post was completely innocent.

When the Endeavor Academy was asked by reporters about their decision, they said that it “involved multiple social media posts that concerned the school community and resulted in multiple parents keeping their kids home from school out of concern for safety.”

While they sent Fox News the school district’s discipline policy, they didn’t state which policy was broken.

You can watch the video, with her full interview, here:

At the end of the day, it sure seems like the school district is just trying to make an example of this girl who, by her own admission, was just going to the range to practice GUN SAFETY!!! While I don’t know the family, she doesn’t seem as if she’s experiencing any of the usual signs of an unadjusted delinquent wanting to shoot up a school.

In fact, she just looks to be a pro-gun, teenage girl who is confused about how to get that information out.

This is amplified to me when you take into account that the she was only suspended for five days. If they really thought she was going to shoot up a school, do you think they’d let her back in?

In closing, let us all take this as an example of how social media posts can totally bite us in the ass when we least expect it to. Snapchat is a platform that is only supposed to keep posts up for an hour. While that sounds appealing and that they can disappear, once something is on the internet, it’s there forever.

Furthermore, people can take pictures of screens with another device, or take a screen shot.